She sank to the ground on a world without name.

We were taking a stroll not far from our ship when she sat down and died.

She sat down and she was gone, in a place where a white plain met a black sky.

I could not stay with her and I could not take her with me, not in any way that mattered.

So I returned to the ship and set a course for home, knowing that it too was no longer there, not if she could not be part of it.

I left that white world behind, never to speak of it again.

I did not navigate. The ship had a course to follow. It might or not be the right direction, but with her gone there was no itinerary, no purpose in going anywhere at all. It was just movement. The trip out had been filled with possibility. The trip back was only negation. I slept when I could. I woke when I had to. I ate because my body demanded it. I found no pleasure, or flavor. I suspected that I never would again.

Once, I ordered the hull to go transparent because I yearned to see the stars. I didn’t know the coordinates when I did, and did not bother to record them. It was a place like so many other places, between systems, far from any place where humanity or the creatures who rival humanity, breathe air and live what lives creation sees fit to give them. There were countless bright specks of light, pinpricks in the cold and the dark, and I knew that once upon a time in the recent past she and I would have stood here together, enthralled, thinking of all those worlds, and all the wonders they held within their bubbles of atmosphere; all those civilizations, those millennia of history, those unsuspected creatures and those treasures in coin unknown to us; and once we would have drawn closer, comforting each other with gentle hopeful lies of how we would live to see them all. The wonder I would have felt, not so long ago, was gone. I was not a creature of the stars, now. I was rather a creature of the vacuum now, of the void that could not support a life worth living.

I made the hull opaque again and restored full speed.

I let the ship make all the decisions. My only command was that it leave her behind.

I did not pay attention to where it took me.

It retraced our trip out.

It passed the ten thousand worlds that made up human space.

It passed the worlds that had names.

It passed the worlds that had been mapped but had not been visited.

It passed the worlds that were home to others, who may have looked up and wondered about the purpose and destination of this one particular speck of light, passing through the darkness.

It passed the worlds ruined by past cataclysms.

It passed through regions where there were no worlds.

It passed through stark emptiness.

By that time I had long since lost even academic curiosity about the details, no interest in enduring the pointless voyage, and so put myself to sleep for as long as I could, suppressing dreams.

It was not life.

It was only the oblivion I wanted.

I do not know how long I slept. Centuries. Millennia. Eons. The ship could keep me alive. It just could not make what life it forced into me worth living. This was not a problem because I refused to let the details in.

I could have killed myself. But it was not what I wanted. There is a difference between wanting to die and not having a reason to live. I did not want to pilot the ship into some raging sun, and for its fires to reduce me to my component atoms. That was not me. But I did not want to make planetfall, did not want to see another face, whether human or creature that had different features I might not recognize as a face. I did want this to be over. But I would not exert the effort to finish it.

Then the alarm woke me.

The ship told me that it had found a place to land and that I had to go outside.

I rose and put on my suit and stepped out onto the surface of another alien world, one not at all special. The stars in its sky fit no recognizable patterns, not to these human eyes; maybe the ship could have used them to navigate back to some world where people still congregated, but as the dust crunched beneath my boots I preferred to think that I had traveled beyond its ability to map, or been in flight so long that I was now the last human being, anywhere; as alone in the universe in fact as I had felt since the moment since she first sank to the chalky dust.

It was a lifeless and airless world, with nothing of note between me and the horizon. There was nothing to see here and would not be, no matter how far I marched, how carefully I mapped. It was just a cold and silent rock, like the one I had in my chest. It was an unimaginable distance from the place where she had died; one even farther away from familiar places than that lonely world, farther away than we had ever gone, and possibly further away than anyone had ever gone. And yet there was nothing at all exotic about it. It was just a place, like any other place.

I could not think of any reason why my ship would have brought me here, let alone urge me to stand on this earth, beneath these pitiless stars.

I just wanted to break, the irrevocable kind of break, that admitted no possibility of unwanted repair.

And that’s when I knew that it had been useless to flee.

There was nowhere I could go, anywhere, that could be far enough to leave her behind. 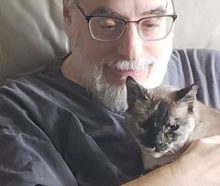 Adam-Troy Castro made his first non-fiction sale to Spy magazine in 1987. His books to date include four Spider-Man novels, three novels about his profoundly damaged far-future murder investigator Andrea Cort, and six middle-grade novels about the dimension-spanning adventures of young Gustav Gloom. Adam’s works have won the Philip K. Dick Award and the Seiun (Japan), and have been nominated for eight Nebulas, three Stokers, two Hugos, one World Fantasy Award, and, internationally, the Ignotus (Spain), the Grand Prix de l’Imaginaire (France), and the Kurd-Laßwitz Preis (Germany). The audio collection My Wife Hates Time Travel And Other Stories (Skyboat Media) features thirteen hours of his fiction, including the new stories “The Hour In Between” and “Big Stupe and the Buried Big Glowing Booger.” In 2022 he came out with two collections, his The Author’s Wife Vs. The Giant Robot and his thirtieth book, A Touch of Strange. Adam lives in Florida with a pair of chaotic paladin cats.