Not Creator, Nor Destroyer

Cotton. Lemon. Drone of bees. Your mother somewhere deep in the cool cave of the house. The sunlight spangling through the last dewdrops on the lilac bush. Everywhere, heat creeping into the edges of the day. Grass against the bare soles of your feet, a single stem of clover curled against the inside of your big toe. The wind shakes the sheets on the line. The cotton whispers. You run your tongue, rough with lemon juice, between your lips.

A bee climbs the sheet, one step at a time, feelers tapping a path before it, searching, as though the cotton knew some secret. The bee’s mandibles work against the threads. You are inches away, the white sheet glowing in the sunlight, the insect a small dark spot of movement. The bee climbs higher, higher than your head; your chin inclines as you watch its progress. When the wind blows, the lower edge of the sheet snaps against your bare knees. The bee stops a moment to secure its grip, then continues.

The bee will never reach the top of the sheet. The twinge of lemon will stay in your mouth, the sunshine hot on the crown of your head, the refractions of dewdrops against your arms. Eventually the door will open and your mother will come out. Eventually you will be taken inside, bathed, clothed, and fed. But that part will never come. The moment hangs shimmering in the air like a pane of glass. You swing at it as hard as you can and it shatters into fragments: cotton, lemon, drone of bees.

How much later, another place. Early evening, a table by the window, a bowl of red clay beads and a shoelace. One bead at a time, speared upon the aglet and pushed along. Your sister is dancing across the kitchen with an orange clamped between her chin and her chest. There is laughter, your sister’s and aunt’s, followed by some conversation you choose not to listen to until your aunt says, “Too damn quiet,” and lays a hand on your head. Your beads are lining up like soldiers. They push on down the road of the shoelace, gathering momentum. You add beads until the shoelace is full, until each new bead pushes the far one from the end of the string. Your aunt takes it gently from your hands, strips the beads at either end, and ties the ends into a knot. She lowers the necklace over your head, where it rests heavy against your chest. You put the bottom of the loop into your mouth and roll the beads against your tongue. The mineral taste of the clay soaks into the spongy length of the shoelace.

Your parents will be out all night. Your aunt will put you to bed. In the morning you will wake with the shapes of the beads pressed into the flesh of your cheek like the tracks of some strange nocturnal creature.

You let that evening go, cut it apart as easily as if you were to take your mother’s sewing scissors from their drawer in the spare room and snip the knot in the shoelace. The beads slip free, the night unravels. The memory is gone; in its place, only pieces. You gather up the beads, the laughter, your sister’s grin.

You have scores of memories like these, all the points that, strung together, make up a life. There are weeks entirely forgotten, and moments shorter than a sentence that have marked you permanently. Your only task is to find them.

You have spent a long time traveling through your inner darkness, an endless jungle where you hunt memories like prey. Those you catch, you dismember. Some prove too delicate, crumbling to dust at even the gentlest touch. You search for the warmest parts, the bits that pulse, that bleed color into the void. Beautiful moments have an easy appeal, but they’re not necessary. All you need is something sharp and vital.

So then: A dark, wet city, so humid even the bricks bloom with mold. The smell of rotting fruit rides the wind from the nearest market to your apartment. The room is sparsely furnished. It is a country where women do not live alone, but you do, coming and going from your apartment with your eyes lowered, a foreigner, careful not to brush shoulders with your neighbors in the narrow hallways.

It is night, a steady rain streaming from the roof, the alley outside alive with the calls of small frogs. The room smells of sesame oil and the eggs you fried for dinner. The power is out. You have lit a candle. Beside it, a joss stick unspools its ribbon of smoke. You sit at the low table, your head bent over a book, the back of your neck damp with sweat, the words dancing in the shadows every time the wind blows. Above the sound of the rain and the frogs, you become aware of a man speaking in the next apartment. At first the cadence of his words is steady, but over time his speech grows erratic, more insistent, rising in pitch. You don’t understand what he’s saying, but it doesn’t sound friendly. Soon there is a sharp sound, like wood breaking, followed by a cry that could be that of an animal or a child.

Putting your book down, you stand to face the wall, touching it with one hand as though you could feel the words coming through. The man gets louder and the animal-child whimpers without pause. You hear a slap, a scream, the sound of something heavy thrown against the wall. You retrieve your purse, fumble through it for your phone, call the police, and say the few things you can manage: your address, the words for “man” and “bad.” They answer in reassuring tones, and you repeat the address for them, slowly and clearly, though it is hard to think over the sounds next door. Back on the floor, you press your hands over your ears, but you hear everything—the shrieks of the frogs, the percussive blows that shake the floor. Eventually you scream to drown out the noise. You don’t know if the police ever come. All you know is that when you stop crying it is quiet, your throat is raw, and the candle is guttering in its own wax. The rain has stopped.

You break this memory quickly, efficiently: the sesame oil, the hypnotic weave of the joss stick’s smoke, the man’s voice, all of it packed away neatly. And then you are gone, leaving the ruined memory behind you, that much the lighter for its dissection.

Some of the most vivid memories are the briefest. A man on the subway platform cutting his hair with a silver knife. The brush of a passing sparrow’s wingtip against your cheek as you sit outside a grimy cafe. Your grandfather pouring rice from a sack with a sound like rain sifting through leaves. You pluck them all from their places, drape them about you like proof against the emptiness.

Outside your body it could be raining. It could be summer. The world could be ending in an ice age or a nuclear slow burn. Or people could be going about their lives in the normal way, while you languish in a hospital, a prison, a lab. You must have known once, but now you do not. You only know there is nothing left for you there.

At last you have what you hope are enough pieces, the raw materials for a future of your own making. You are not a creator, nor a destroyer, just a scavenger, stripping meat from the bones of past days, stitching hide to gristle in the hopes of assembling something to replace the world you left outside. You spread your treasures out before you, touching each fragment of memory as you begin to imagine its new use.

Take the cotton, the red clay. Form a tent for shade, and a jug for carrying water. Shape your aunt’s laughter into the crying of gulls, the smoke of the joss stick into a skein of dark wool, waiting to be knitted. For company, you have a field of fragrant sesame plants beyond your door, where bees dip and hum in the thick heat. You lie on your back, watching the wind billow the tent’s sides, rolling a lemon between your palms.

It won’t last forever. No part of life lasts forever, not even the future. Eventually it will be one more memory. But that is a worry for another day. For now, you take the silver knife and slice the lemon in half. You run your tongue across the tart flesh inside. You listen for the first drops of rain moving through the leaves. 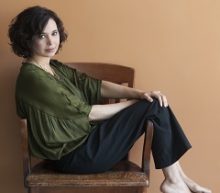 Anjali Sachdeva is the author of the story collection All the Names They Used for God, winner of the 2019 Chautauqua Prize and an NPR Best Book of 2018. She has received a creative writing fellowship from the National Endowment for the Arts and an Investing in Professional Artists grant from the Pittsburgh Foundation and the Heinz Endowments. Her stories have been featured on the LeVar Burton Reads podcast, and her recent fiction has been published in McSweeney’s Quarterly, Lightspeed, and MIT Technology Review, with new work forthcoming on Tor.com. She teaches at the University of Pittsburgh and in the low-residency MFA program at Randolph College.