Tara sat in the back of her marine biology class and read the news on her braille tablet. One hundred eighty-seven countries had recognized Mars as the first off-planet country, much to the consternation of the as-yet-unrecognized lunar colonies. The Martian flag was blue with a red circle. Like Mars itself, the flag was inaccessible to Tara. What was blue? Tara could make a list — the ocean and the sky, Kiki’s hair that time she dyed it. Blue was cold, and red was hot, but Kiki’s hair didn’t feel any cooler after she dyed it. Color made no sense.

Kiki was leaving for Mars on the next transport, three weeks away, to start her graduate work on the microorganisms buried deep beneath the planet’s surface. Tara sighed. She’d been accepted to the Xenobiology program, too, but Mars was governed by a bunch of ableist jerks who didn’t want to make accommodations for her disability. According to them, the medical requirements were for her safety and comfort, but it was really the same bullshit she’d dealt with all her life. No one wanted to believe that a blind girl could be a scientist, especially a biologist, but it was the only thing she’d ever wanted to do.

She remembered the first science book she’d ever read on her own — Touch the Universe by Noreen Grice. The tactile pictures of the solar system and beyond had captured her imagination and made her realize that a career in science wasn’t an impossible goal. Her interests later shifted from astronomy to biology, but there was still a soft spot in her heart for astronomy, for distant planets and the vast emptiness of space. The Xenobiology program on Mars would be perfect for her, if only she could get herself to the planet.

After class, she heard someone approach as she packed up her things.

“Tara.” It was Dr. Archer. Had he noticed that she wasn’t paying attention in class?

“I’m sorry about the tablet,” Tara said, “I already know the material and I wanted to read the live newsfeed on Mars — ”

“After working in my lab so long, you could have given the lecture today,” Dr. Archer reassured her. “I’m glad you’re here, though. A colleague of mine is running an experimental vision treatment, and I think you’d be a great candidate.”

Tara almost declined, but, out of respect for her advisor, she resisted the urge. If the treatment let her pass the vision test, she could do her graduate work on Mars, with Kiki. Dr. Archer clearly thought it was a fantastic opportunity. He had always been supportive of her in the lab, and his intentions were good, but he never quite managed to suppress his surprise when she did something well.

Dr. Archer explained the treatment, over-enunciating the words slightly, as though being blind somehow impaired her hearing. Modified cells from electric eels would power retinal implants, metabolizing sugar from her own bloodstream. Unlike traditional batteries, the eel cells did not carry the risk of releasing toxins into her body if they failed, so everything was internal. No telltale glasses to hold the power source and give her an automatic fail on the vision test. It was a great new technology, except that Tara had never had any desire to see.

Was the graduate program on Mars worth risking the treatment?

Tara discussed the details of the study with the research team, and talked it over with her parents, with Kiki, with Dr. Archer. She confirmed with Dr. Chalasani, head of the Xenobiology department on Mars, that she could defer acceptance of her graduate student position until she had recovered from the surgery. She read the latest research on electric eels.

Tara was happy with herself the way she was. She resented the implication that the surgery would somehow improve her, or worse, fix her. There were plenty of research labs on Earth that would be happy to have her.

Weeks passed, and Kiki left for Mars. Tara buried herself in research to avoid making a final decision about the retinal implants. She continued collecting data for a study that examined changes in the shape of phytoplankton in response to changes in climate and ocean current. Phytoplankton were tiny organisms, too small for her sighted colleagues to see with their naked eyes. Who better than a blind woman to study the invisible?

Tara loaded a slide into the microscope and sent the digitized output to her tablet. The image was rendered in raised lines that she could trace with her fingertips. She did a count of each morphological type and logged the results, as she had done for hundreds of samples across varying conditions. Additional samples only strengthened the patterns they’d seen in the preliminary data. Climate change affected not only the quantity of phytoplankton, but also the proportions of various shapes. Different conditions favored different morphologies, and the phytoplankton were adapting.

The techniques she used to study phytoplankton were well suited to studying the microfossils buried beneath the surface of Mars. Instead of tiny ocean plankton, she could trace the shapes of alien microbes. Her fieldwork could take her beyond the oceans of Earth and onto the surface of Mars. If she wanted to be at the forefront of Xenobiology research, she too would have to adapt.

She signed the consent forms and scheduled her surgery.

The retinal implants were both a success and a failure. When the doctors peeled away the bandages, Tara got visual input she had never experienced before, but her mind had no way to make sense of it. She knew the difference between smooth and bumpy, and how a cube was different from a sphere — but she knew these things by touch, not by sight. It was frustrating to be unable to parse a visual world that even small children understood.

Mars wasn’t worth it.

Tara went to a psychiatrist and got a diagnosis for depression, and a prescription for TMS: Transcranial Magnetic Stimulation Therapy. The psychiatrist didn’t know about her implants. She didn’t know the damage an electromagnetic coil could do to the eel cells that powered Tara’s unwanted sight. Tara picked up the TMS wand from the pharmacy. It was shaped like the brush she used to scrub her toilet, and it would scrub her sight away.

Tara pressed the TMS wand against her temple, but she couldn’t force herself to activate the electromagnetic coil.

Mars was too far away for real-time conversations, so instead she cried to Kiki in a video message, and had to wait half an hour for her consolations. When a response finally came, Tara closed her eyes and let the familiar sound of Kiki’s voice ease her fears. “You don’t have to make sense of everything,” Kiki said, “All you have to do is pass the vision test. Focus on what you need for that, and let the rest go. Oh, and I dyed my hair again, it’s purple.”

Tara smiled. Kiki knew that she’d listen with her eyes closed, and she knew that color was the aspect of vision that Tara found most intriguing, and most baffling. Tara played the message again, eyes open this time, and tried to notice a difference in Kiki’s hair. She failed in that, but succeeded in identifying the high contrast edges where face met hairline, and noticed the motion at the end of the video, when Kiki turned her head to show off her freshly dyed hair.

Tara kept her eyes open for an hour that day. Then two hours the next day, then four, and eventually most of the day. She learned to see edges and recognize objects. She learned to track things that were moving. She forced herself to use the sense she’d never wanted.

Tara tried to lose herself in her research, but even there she was plagued by her newly acquired sight. When she reached for a flask, she misjudged the distance, and her hand knocked it to the floor. The glass shattered.

She picked up the biggest piece of the broken flask, and it sliced her hand. She cursed at her foolishness for trying to grab something sharp, then cursed again at her inability to perform what should have been a simple task. Vision had ruined not only her perception but also her coordination. She stared at her hand, a trickle of blood oozing out from her finger.

The blood, she told herself, was red. She put a bandage on the cut, and carefully cleaned the mess she’d made. When all the glass was gone, she mopped up the seawater and made a record of the lost phytoplankton in her research notes, painstakingly written by hand to force herself to practice reading and writing. Like her blood, the ink she used to log the lost sample was red.

Red like the sea stars Kiki used to study, still clinging to the sides of their tank in Dr. Archer’s lab. Red like the shuttle trails across the sky at sunset. Red like the planet that haunted her dreams — a tiny circle of red in a field of black, like a single drop of blood on a skin of darkness.

Red was everything she wanted but could not have.

Two years after her surgery, Tara took the vision test. She passed, and laughed when she saw that the official stamp of approval on her medical certificate was red.

The Nation of Mars could require that she have sight before she immigrated, but they couldn’t force her to use it. On the shuttle, she walked from her quarters to the mess hall with her eyes closed, refusing the repeated offers of assistance from other passengers.

Tara texted messages back and forth with Kiki on her braille tablet. She could read printed letters, but she preferred the feel of braille beneath her fingertips. Kiki told her all about the latest excavation site and a new class of microorganisms she’d discovered there. Tara complained about the stringent weight restrictions on luggage for the shuttle ride. She didn’t mention that she had left behind two pairs of shoes to make room for a TMS wand.

At night she dreamed of collecting soil samples, the feel of cool dirt through protective gloves, the soft hum of spacesuit life support systems, and the warmth of Kiki’s face beneath her fingertips. During her long days on the ship, she worried. Not about the research or adapting to life on Mars. She worried that people would expect her to use her ability to see. How would Kiki feel when Tara wanted to touch her face instead of looking at it? How would Dr. Chalasani react if Tara did her fieldwork with her eyes closed?

She walked in carefully measured steps to the largest viewport in the shuttle, the rectangular window at the front of the common room. She clutched her TMS wand in her hand, the weight of the electromagnetic coils both reassuring and unsettling. Kiki would understand, she always understood. And Dr. Chalasani would never need to know why or how the implants had failed. Tara opened her eyes and stared at the approaching red planet.

Then she closed her eyes, and surrounded herself in the comfort of black. 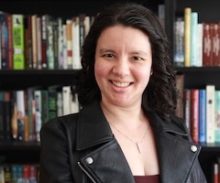