She was being chased. She kicked off her shoes, which were slowing her down. At the same time her heavy skirts vanished and she found herself in her usual work clothes. Relieved of the weight and constriction, she was able to run faster. She looked back. She was much faster than he was. Her heart was strong. Her strides were long and easy. He was never going to catch her now.

She was riding the huntsman’s horse and she couldn’t remember why. It was an autumn red with a tangled mane. She was riding fast. A deer leapt in the meadow ahead of her. She saw the white blink of its tail.

She’d never ridden well, never had the insane fearlessness it took, but now she was able to enjoy the easiness of the horse’s motion. She encouraged it to run faster.

It was night. The countryside was softened with patches of moonlight. She could go anywhere she liked, ride to the end of the world and back again. What she would find there was a castle with a toothed tower. Around the castle was a girdle of trees, too narrow to be called a forest, and yet so thick they admitted no light at all. She knew this. Even farther away were the stars. She looked up and saw three of them fall, one right after the other. She made a wish to ride until she reached them.

She herself was in farmland. She crossed a field and jumped a low, stone fence. She avoided the cottages, homey though they seemed, with smoke rising from the roofs, and a glow the color of butter pats at the windows. The horse ran and did not seem to tire.

She wore a cloak which, when she wrapped it tightly around her, rode up and left her legs bare. Her feet were cold. She turned around to look. No one was coming after her.

She reached a river. Its edges were green with algae and furry with silt. Toward the middle she could see the darkness of deep water. The horse made its own decisions. It ran along the shallow edge, but didn’t cross. Many yards later it ducked back away from the water and into a grove of trees. She lay along its neck and the silver-backed leaves of aspens brushed over her hair.

She climbed into one of the trees. She regretted every tree she had never climbed. The only hard part was the first branch. After that it was easy, or else she was stronger than she’d ever been. Stronger than she needed to be. This excess of strength gave her a moment of joy as pure as any she could remember. The climbing seemed quite as natural as stair steps, and she went as high as she could, standing finally on a limb so thin it dipped under her weight, like a boat. She retreated downward, sat with her back against the trunk and one leg dangling. No one would ever think to look for her here.

Her hair had come loose and she let it all down. It was warm on her shoulders. “Mother,” she said, softly enough to blend with the wind in the leaves. “Help me.”

She meant her real mother. Her real mother was not there, had not been there since she was a little girl. It didn’t mean there would be no help.

Above her were the stars. Below her, looking up, was a man. He was no one to be afraid of. Her dangling foot was bare. She did not cover it. Maybe she didn’t need help. That would be the biggest help of all.

“Go away. Find your own tree.”

They went swimming together, and she swam better than he did. She watched his arms, his shoulders rising darkly from the green water. He turned and saw that she was watching. “Do you know my name?” he asked her.

“Yes,” she said, although she couldn’t remember it. She knew she was supposed to know it, although she could also see that he didn’t expect her to. But she did feel that she knew who he was—his name was such a small part of that. “Does it start with a W?” she asked.

The sun was out. The surface of the water was a rough gold.

“What will you give me if I guess it?”

She looked past him. On the bank was a group of smiling women, her grandmother, her mother, and her stepmother, too, her sisters and stepsisters, all of them smiling at her. They waved. No one said, “Put your clothes on.” No one said. “Don’t go in too deep now, dear.” She was a good swimmer, and there was no reason to be afraid. She couldn’t think of a single thing she wanted. She flipped away, breaking the skin of the water with her legs.

She surfaced in a place where the lake held still to mirror the sky. When it settled, she looked down into it. She expected to see that she was beautiful, but she was not. A mirror only answers one question, and it can’t lie. She had completely lost her looks. She wondered what she had gotten in return.

There was a mirror in the bedroom. It was dusty, so her reflection was vague. But she was not beautiful. She wasn’t upset about this, and she noticed the fact, a little wonderingly. It didn’t matter at all to her. Most people were taken in by appearances, but others weren’t. She was healthy; she was strong. If she could manage to be kind and patient and witty and brave, then there would be men who loved her for it. There would be men who found it exciting.

He lay among the blankets, looking up at her. “Your eyes,” he said. “Your incredible eyes.”

His own face was in shadow, but there was no reason to be afraid. She removed her dress. It was red. She laid it over the back of a chair. “Move over.”

She had never been in bed with this man before, but she wanted to be. It was late, and no one knew where she was. In fact, her mother had told her explicitly not to come here, but there was no reason to be afraid. “I’ll tell you what to do,” she said. “You must use your hand and your mouth. The other—it doesn’t work for me. And I want to be first. You’ll have to wait.”

“I’ll love waiting,” he said. He covered her breast with his mouth, his hand moved between her legs. He knew how to touch her already. He kissed her other breast.

He kissed her mouth. It was not a hard kiss, but it opened her eyes. This was not the right face. She had never seen this man before, and the look he gave her—she wasn’t sure she liked it. Why was he kissing her, when she was asleep and had never seen him before? What was he doing in her bedroom? She was so frightened, she stopped breathing for a moment. She closed her eyes and wished him away.

He was still there. And there was pain. Her finger dripped with blood, and when she tried to sit up, she was weak and encumbered by a heavy dress, a heavy coil of her own hair, a corset, tight and pointed shoes.

“Oh,” she said. “Oh.” She was about to cry, and she didn’t know this man to cry before him. Her tone was accusing. She pushed him and his face showed the surprise of this. He allowed himself to be pushed. If he hadn’t, she was not strong enough to force it.

He was probably a very nice man. He was giving her a concerned look. She could see that he was tired. His clothes were ripped; his own hands were scratched. He had just done something hard, maybe dangerous. So maybe that was why he hadn’t stopped to think how it might frighten her to wake up with a stranger kissing her as she lay on her back. Maybe that was why he hadn’t noticed how her finger was bleeding. Because he hadn’t, no matter how much she came to love him, there would always be a part of her afraid of him.

“I was having the most lovely dream,” she said. She was careful not to make her tone as angry as she felt. 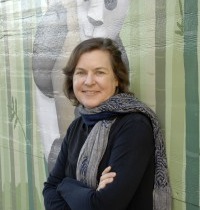 Karen Joy Fowler is the author of six novels, including Sarah Canary, which won the Commonwealth medal for best first novel by a Californian and The Jane Austen Book Club, a NY Times bestseller. Also three short story collections, two of which won the World Fantasy Award in their respective years. Her most recent novel We Are All Completely Beside Ourselves, was published by Putnam in May 2013 and won the PEN/FAULKNER for fiction. She currently lives in Santa Cruz and is at work on a historical novel.

This issue's cover art by Grandfailure (via Adobe Stock).