The first time Reema disappeared was in the middle of an argument with her husband Dean.

No, not an argument. Let’s not be euphemistic about it. It was a full-blown battle with words flung like knives during a circus act.

It ended with Dean hurling a lava lamp at Reema. That was the moment she vanished. The lamp sailed through a Reema-shaped hole in the air and smashed to pieces against the wall. Reema reappeared a minute later in front of her stunned spouse with no memory of where she’d gone or the fight they’d been having. Dean decided he was hallucinating and went to bed for three days, by which time Reema had moved out along with Sooty the cat.

The second time Reema disappeared was in the Metro Toronto Convention Centre during a media presentation on the latest version of a virtual escape DreamLabz had developed. The audience thought her disappearance was part of the presentation. She reappeared a few minutes later to the sound of applause and scattered laughter.

“How did you do that?” whispered her colleague from the marketing department after they had disconnected the mike and walked her off the cameras. “It was so cool.”

“Do what?” said Reema, bewildered. She couldn’t quite remember what she was doing there, although she had a hazy notion it was to do with product development and how to lie effectively in front of a large audience.

“Not telling me Virtual’s secrets, are you?” He grinned. “We don’t care, as long as the dream sells.”

Reema took the sky train back to her new home—a three hundred square foot studio on the thirtieth floor of a hip new building on the lakeshore—feeling out of sorts. She called in sick the next day and phoned her mother. In retrospect, this was probably not a good idea, even though she remembered to turn the video off. The conversation went like this:

Mom: Why are you calling me? What’s wrong?

Reema: Nothing. Just wanted to see how you are after the operation. How’s the new knee?

Mom: That was five months ago. Now it’s my hip that needs replacement. Switch on the video, I want to see how you look.

Mom: You need a new husband too? Poor Dean. He called last night.

Reema: What do you mean, “poor Dean”?

Mom: Don’t you raise your voice at me, young lady. I gave birth to you, fed you, cleaned your bottom-

Mom: When is the last time you went to the temple?

That was when Reema disappeared for the third time. She was gone for fifteen minutes. When she returned, her mother was still talking, in the same aggrieved tone of voice.

Reema ended the call, disoriented. There was no getting away from it. Something was definitely wrong. She was missing bits of her life. She suspected they were unpleasant bits, but still.

Sooty wove between her legs, purring in delight to have her back. Reema picked him up and stroked his pretty head. If she was forgetting stuff, maybe Sooty could help her by recording it. She fetched a pair of unopened retinal cameras and fitted them on his cat-eyes.

It wasn’t easy. Sooty had some dog-like tendencies, but he was no pushover. In the end, she had to sedate him before she was able to slip the lenses on.

That was how, when Reema disappeared for the fourth time (following a tense phone call with Human Resources), she had actual proof of it.

She watched the video with a bag of buttered popcorn on her lap. Sooty cuddled next to her, having forgiven her assault on his eyeballs. She played the video twice, watching herself disappear and then reappear after a gap of twenty minutes. She switched off the player, exhausted and exhilarated.

She had vanished. Just when things were getting stressful too, with HR demanding a medical certificate of leave and Tony shouting about how he needed her back in Virtual, she was his best engineer, dammit.

Of course, Reema knew that merely disappearing for short bursts of time wouldn’t quite cut it. She had to stay away for much longer durations for problems to actually recede. Perhaps this was something that could be achieved with practice?

She went to work the next day, more clear-headed and confident than she’d been in years—ever since she’d joined DreamLabz, in fact. She excused herself from testing that day and started work on a new design, Tony breathing quite unnecessary words of encouragement in her ear.

At lunchtime, Reception called. Dean had shown up, demanding to speak with her. Reema rose from the desk, grabbing her specs.

“But,” expostulated Tony, “we haven’t run the safety tests yet.”

“I’ll be the test.” Reema strode to the Dream Scanner, affectionately nicknamed “coffin” for the way it looked, and fed her specs into it. Then she gave Tony a little wave and climbed into its womb-like depths.

Tony waited for the usual fifteen minutes, but Reema did not emerge. Finally, after half-an-hour of frustrated pacing, he over-rode command of the scanner and opened it up.

There was, of course, no one inside. And although he was in therapy for years afterward, the shock was something Tony never quite recovered from.

It was a lovely dream about a woman who could travel between worlds. Reema sat on soft lemon-yellow grass, shaping and reshaping the clouds in the banded sky. Her hand trailed the emerald-cool water of a pond. A school of tiny clownfish tickled her palm. It was time to go back. But the problem with going back was that she would remember none of this.

A shadow fell across the pond and she looked up. A golden bird-like being beat powerful wings across the sky. Reema rose in astonishment and delight. No way she’d thought that up. What other secrets did this world have from her?

She started across the field, her eyes fixed on the wondrous creature above. With every step she took, the world she’d left behind receded further, until it was no more than a mote in her mind’s eye. 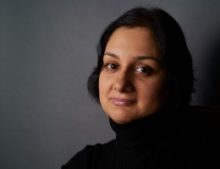 Born and raised in India, Rati Mehrotra now lives and writes in Toronto, Canada. She is the author of the science fantasy novels Markswoman (2018) and Mahimata (2019) published by Harper Voyager and the YA fantasy novel Night of the Raven, Dawn of the Dove (2022) published by Wednesday Books. Her short fiction has been shortlisted for The Sunburst Award, nominated for The Aurora Award, and has appeared in multiple venues including The Magazine of Fantasy & Science Fiction, Lightspeed Magazine, Uncanny Magazine, Apex Magazine, Podcastle, Cast of Wonders, and AE – The Canadian Science Fiction Review. Find out more about her at ratiwrites.com or follow her on Twitter @Rati_Mehrotra.