The Eyes of the Flood

The river’s in flood again, and it feels like a blessing from God. You emerge from your home, built with wood and plastic scraps of ancient towns, and stand on the green hill high above the rushing waters.

You remember from when you were young that the river would spill over its banks every year, submerging the low-lying land, turning fields that had lain fallow through the darkness and bitter cold of winter into lakes of rushing, wild water. And then when the waters had drained away, the corn could be planted in the deep sediments left behind. The river’s gift.

The first flood after the war had brought black water choked with bricks, scorched wood, crumpled cars, and corpses. You remember the smell of it all during those rare days when the sun came out and the temperature rose and you could venture hesitantly, like a mouse creeping out from under the sofa, from the concrete bunker. You gagged and wept and sighed and raged, but your family below needed food and supplies, so you went to the bloody banks of the river to scavenge what you could. It hadn’t been much.

In the end the radiation and the plague killed them anyway, leaving you alone.

You have canoes you’ve made by hollowing out the thick trunks of fallen trees, and you set your newest and sturdiest in the water. Today you will drift south to see what the floods might give you easy access to that you couldn’t reach before. You have your camping supplies—you can stay in the south for weeks until the floods recede. Then you’ll paddle north, against the current, back to your home.

As you set the canoe in the water and shove off, you feel the insistent tug of the far south. You once ventured down to the briny expanse of the Sound, and then west to where the Sound narrowed and the great city began. You turned back at the sight of one of the bridges; it was somehow still intact, but now wrapped in climbing vines. Gnarled trees rose from the roadbed, their branches twisting around the cables.

But barely visible on one of the towers were two faded words painted in red—Go Back.

The words were old, the ones who had scrawled them there long dead, but it had felt like a sign to you. You are careful; it’s why you’ve been alive for so, so long. Or so you believe.

So you turned back.

And as you paddled away, delicate fingers grasped the rusted railings of the bridge, and hungry eyes followed your slow, curving wake.

You paddle softly out into the middle of the river, and you wonder about what lies far to the south, in the lands you’ve never seen. Maybe the people there had been better able to survive the winters, the years without sun, the blight, and the poison water and sky. Maybe there or far to the west you might find pockets of survivors like yourself.

That’s the marvel of the Earth, you think, your mind moving in slow, familiar patterns: Life survives. Even now, the trees grow tall and birds sing as your canoe slips by. They are not the same trees, not the same birds. These trees have long, delicate leaves, almost like pine, and the birds are smaller and meaner. The creatures in the vast forest stretching from the ocean to the mountains are different, too, in subtle and strange ways. You leave them alone, and they return the favor, but at night you can sometimes hear their high, eerie calls.

The ruins of the small river city are just beyond the rapids. The feeder stream there has finally burst free of the concrete that once encased it, and you paddle up until you find a patch of high ground to camp on for the night. You need little food, but still you build a fire and deliberately chew the bark of one of the trees.

When night comes, the sky is full of stars. You watch them, your thoughts slowing to a crawl, and you train your gaze on the new, dazzlingly bright one that appeared only three seasons ago. There was a time when you would have wondered what it was. But now you only accept it. It is. It is here.

Strange things happen in the heavens, they come and they go. They rarely concern you, though they make you feel small and grateful for your life. Once, your life ran with the phases of the moon, but the moon is rarely visible these days, and you stopped bleeding long ago.

You form a picture of God in your mind and you circle your arms above your head in prayer. Then, warmed by the fire, you drift away.

As you dream, you are watched.

The flood has grown in the night, and by the time the morning dawns, gray and rainy, it has come halfway to your shelter. You are glad. You decide to venture further up the narrow lake made by the swollen stream, paddling silently between the whip-thin trunks of the young trees.

Then, suddenly, you draw in your breath and ease your paddle out of the water, all senses alert. There are long, narrow, parallel tracks in the mud by the water.

The canoe drifts, just wood borne by the stream, as your mind spins. This is new. You don’t recognize this.

But some part of you, some ancient memory combined with new insight, does know. A vehicle has been here.

You are not alone.

You float on the water, paralyzed, and for the first time in many, many years, you are afraid.

The last time you were not alone was when the few remaining survivors from the eastern farm towns came to your shelter, their eyes hollow and hungry, begging for food. You gladly gave them what little you had; they tried to kill you anyway. You were impossibly alive, impossibly healthy. Your eyes shone with something they didn’t recognize, something they were afraid of.

They were easy to fool, and easy to outrun. They were half dead already. The world was extinguishing humanity’s light, a desperate act of self-preservation.

You have not seen anyone since, and you have been alive for a very, very long time.

You are careful. You want to flee, to let the current carry you back to the river, to hide and let the floodwaters rise and cover the bank.

But you cock your head, looking and listening. You see and hear nothing new, nothing moves in the distance, there is no sound of an engine or a voice. You dip your paddle in the water and redirect the canoe ever so slightly in the direction of the shore. The canoe runs aground, hitting the mud with a dull, scraping thunk.

You take what you need, including a sharpened piece of rock, and follow the tracks.

You don’t know why you are still alive. Your husband, your children, and everyone else died so long ago that their bones are dust. But instead of being burned by acid rain, poisoned by the air and water, or rotted away by the fast, relentless, and pitiless plague, you remained yourself. You lived.

You know you’re different, that you somehow in the moments after the blast became something else, but you don’t know why or what. You used to spend long days by the river staring at your reflection, wondering, as your jaw lengthened, your hair receded, your eyes changed color, and your ears grew scaled and long.

It occurs to you that the person with the vehicle might know why. You are not certain you want to know, though, after all this time has passed. You’re not happy, exactly, nor are you sad or worried. But you are calm, and you are balanced. You have few needs. You exist, and you will endure.

You are careful. You aren’t sure that you should risk what you have. What good would knowing do, anyway?

Yet still you follow the tracks carved into the muddy ground as they lead into the forest.

The trees here grow thick; this is high ground and good soil, so they are ancient. Some of them, the tallest with the thickest trunks, have been here nearly as long as you. You place a fond hand on one as you pass. It is good to endure.

The tracks lead into a clearing ahead. You know there was no clearing there before, and you hide behind one of the huge, old trees to decide what to do next. To endure is good; to risk and perhaps be cut down is wasteful, wrong, and too like the past.

You listen. And then you hear a voice.

You remember voices, and you remember language. You used to talk to yourself, endless streams of thought given voice, but you fell silent long ago. You are not sure what your voice sounds like, or even if you can still use it. You think not in spoken or written language, but in grand pictures and emotions and scenes. To you, God is a flowing river, a bright sun, and life pushing up from beneath the once-tainted ground. God is a bomb, a plague, a shower of rain that stings, a beach choked with bodies and rubble. God is fresh air and putrescence, a fish in the water and the spear that pierces its scaly sides.

But God is not a voice. You listen. You do not know the sounds. You dare to look, and you see movement.

You see the vehicle, narrow and silver and graceful. And beside it, you see yourself.

But this is not you.

This is like you, but taller, more graceful, and, you think, older. This one has scaled ears, a long jaw, a shining bald scalp, and wide eyes the color of sunset. They are beautiful.

They turn to where you are hiding, and speak.

You want to run. You are careful! This is danger! You must be like the tree, you must endure, you must get away.

But something, some older impulse, some piece of you that existed before the first bomb put the first city to the fire, keeps you rooted where you are.

They walk toward you, and you are afraid.

But you stand your ground. You finger the sharp rock you have.

They hold out a webbed hand, so like your own. Your grip tightens on the rock.

They do not move. The trees blow in the breeze. Behind you, the river’s flood begins to recede.

Then you reach out, and at last, after so long, your hand closes on mine. 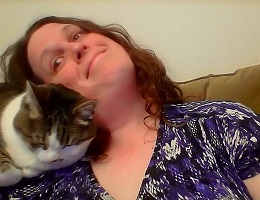 Susan Jane Bigelow is a writer, librarian, and political columnist from Connecticut. She is the author of five science fiction novels from small press Candlemark & Gleam, including the Extrahumans and Grayline Sisters series. Her short fiction can be found in the magazines Strange Horizons, The Toast, and Apex Magazine, and in the anthologies War Stories and the Lambda Awards-winning The Collection: Short Fiction From the Transgender Vanguard. Her weekly column on Connecticut politics can be found at CTNewsJunkie.com. She lives in northern Connecticut with her wife and a herd of very fuzzy cats, where she spends her days writing and playing video games.