The Heaven That They Never Knew

Ginger clings to the skin of Heaven, wrapped in deep, cold vacuum. She’s a speck in the void and her breath trembles inside her helmet. No sound in space. So she breathes. She has to stay grounded, keep her thoughts from shaking and drifting to hostile sensors.

Heaven’s skin is a smooth, shimmering membrane enclosing the angelships. Heaven: a bubble the size of a small moon, seeded with egg-like metallic beings that chew and swallow and reap. Locusts with a taste for spirits; nothing holy in those devourers.

Anger jitters in her. Ginger focuses on the chill of her skin, her suit systems keeping her only warm enough to function. The numbness helps.

The translucent membrane noses at her hands and feet as she crawls onward. Little ripples that spiral deep, inverted stones-thrown-into-water. Command isn’t certain the skin itself is alive or has synaptic structures that allow it to react and gather data. She doesn’t look too closely at the inside of Heaven, at the trillions of sedan-sized angelships. Looking means she’ll think. Thoughts unconfined too soon will make her lose this fight for survival.

She’s seen the footage. Everyone has. Heaven has floated across lightyears, world to world, slitting its own belly and birthing a locust horde to strip fertile planets bare of life. Artificials are the only survivors . . . in a sense. Android minds corrupted beyond salvation, bodies somewhat intact.

It was a first gen facilitator bot that recorded the harvest and survived to bring the information to Command as a warning. The bot’s name was GB-721. It self-destructed once the data was in biological hands.

Heaven hovers in a holding pattern at the cusp of human space. The solar system spreads out in a feast of worlds and moons: colonies speckled like daubs of frosting in a meandering line towards the cupcake Earth.

Ginger crawls. She’s nearly at the apex of Heaven. It’s taken her seventeen days, six hours, and twenty-four minutes so far. From the shuttle, now cold and drifting, to the risky space-jump to Heaven’s skin itself. As much of her body as possible was replaced with cybernetics to let her live out here. Only her mind remains untouched by technology.

She tilts her head back, unable to see anything but the arc of deep space. Heaven glows bright, a thrumming sphere of energy and hunger. Ginger wraps her thoughts in serenity. It took her three years of focused meditation to prepare herself for this.

Heaven is in no hurry to eat the universe. When there are no more worlds, will it go dark? Or simply wait until evolution reseeds husks and the perpetual cycle resumes?

Under her hands, the membrane shivers. Ginger stills. Her thoughts are dangerously loud: the edge of fear, the tint of rage. No. Calm. She must be as empty as the void tucked about her. She empties her mind, swallowing in only blankness.

The skin smooths and resumes its normal haptic buzz at her touch. She’s nearly to the top.

The recording GB-721 brought to Earth made three scientists and four technicians commit suicide after watching it. Four years of careful, limited exposure by a team of engineers passed before anyone could decipher the images, the sounds, the warning.

Ginger was still a small child. Her mother stopped taking her to church when news broke about Heaven’s approach. “I hate that name,” Mom said, again and again. “It’s wrong.”

“Heaven is supposed to be beautiful,” Mom said.

It is, though. Unfathomable, horrific, unspeakably beautiful.

If the angelships hear her, she’ll die. Yes. So will everyone else, because Heaven will know. Surprise is the only weapon humans have.

Her best friend grew up to become the scientist who finally cracked the last mystery of GB-721’s message. Ariel sacrificed her health and her mind to the reveal.

“It’s thought,” Ariel gasped. Ginger sat by her bedside in Command’s hospice. “Heaven feasts on the spaces between our synapses, on a subatomic level there’s connective tissue we don’t understand.” A rattling breath. “All life is . . . thought . . .”

Ginger set out to become the thought that would topple Heaven.

At the seam, where Heaven opens its belly. A flap she can slip inside. The skin ripples faster. The angelships’ wings flutter. She’s looking into Heaven, the eternal pit of hunger.

Ginger activates her suit’s end-game routine. Heat floods her body and she launches herself the last kilometer towards the flap. The angelships rustle; their round, lamprey-like maws spiral open.

The thought cracks like the splitting of a new universe. Heaven roils, the membrane peeling back like lips over an endless, unsated mouth. Ginger hurtles herself into Heaven’s throat. Light flares, burning out her eyes through her helmet. Pain is insignificant.

Wrath, destruction, deplorable words unspoken since time immemorial. Ginger has them all laced through her mind. She plunges down through the angelships, letting her thoughts rip Heaven asunder.

She is poison, she is decay, she is the end.

If she succeeds, Heaven will become a husk.

All the thoughts of humanity are distilled into weaponized kernels that explode in her head. She falls through Heaven, burning the devourer into ash in the light. 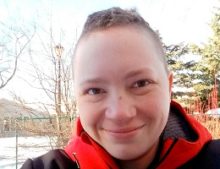 Merc Fenn Wolfmoor is a queer non-binary writer from Minnesota, where they live with their two cats. Merc is the author of the short story collections So You Want to Be A Robot (2017) and Friends For Robots (2021), and the novella The Wolf Among the Wild Hunt. They have had short stories published in such fine venues as Lightspeed, Fireside, Nightmare, Apex, Beneath Ceaseless Skies, Escape Pod, Uncanny, and more. Visit their website: mercfennwolfmoor.com or follow them on Twitter @Merc_Wolfmoor.