The Inheritance of Dust and Leather

It never was a love story. Or perhaps it was, but I was too blind to see it. I kissed him because I had to—because the castle demanded it and the servants needed it—and frankly, the dead are talkative bastards. He transformed, and in his place was a man dressed in green and gold with hair that needed trimming and hands instead of paws. And I smiled, because it was expected, and I said “Yes” because it was expected. And then, I married him for his library.

You would not blame me, if you had seen it in its true glory. The way the bookcases stretched to the ceiling and the polished floors reflected the morning light. If you knew the power of its smell—the way that paper and leather and dust combined into something otherworldly. There were ladders and I climbed them; there were books and I read them. For long years, I watched the rose gardens through the window by my writing desk, as he read over my shoulder and offered suggestions on my work. Our children played at my feet, their laughter floating through the library, and I was happy.

But the dead knew, even if I didn’t. They had been there too long, too many centuries in this castle and with this family. The things they had seen: the princes and the kings and the occasional queen, all of them transformed into creatures that would rival the finest bestiary. Some of them had survived; many others had not.

I refused to believe the dead because I didn’t want to believe them. I had done my duty, and this was my reward. But we are so foolish when we are young, aren’t we?

Being a beast does something to a man—it carves out a tiny portion of his heart and replaces it with something not-quite-human. And no matter how much like a man he looks, it grows, ever so slowly, year by year. Until you turn in your bed one day, and realize that the person next to you is more beast than man, despite the shell he wears.

He grew angry and I grew angry, too. We fought across the castle—dishes thrown, windows smashed, paintings slashed. I bundled the children in a carriage in the dead of night and escaped to a neighboring estate. He followed me. So, I ran. And we hid.

As the children grew into adulthood, we learned to fend for ourselves—my sons became fine blacksmiths, my daughters were skilled with a needle. I missed the books—not so much the man or the castle, but the library itself. I spent every spare hour I had trying to recreate the manuscript I had abandoned. We were safe, as safe as I could make us, and if not precisely happy, we were alive.

The change came with the night—with the way that my oldest son screamed in his sleep—and the creature that I found in his place. With the lion-like mane that ringed his head and the green scales that wound up his legs; with the way that unnatural strength rippled through his fur-covered muscles and bad temper threatened to hurt us all. And I knew, because you always know. I wept—of course, I wept—but weeping would not solve anything.

Back to the castle we went, this time only the two of us—I refused to let the others come. The risk was mine to take; he was still my child, and I would still protect him. It didn’t matter that he was as monstrous as his father had been. His fur was soft and golden, and his claws were shorter than his father’s, but they were otherwise identical. And in his eyes, I saw the pain and panic that I had known so well when I was young.

They fought when we arrived, through the great hall of the ruined castle and up the stairs, two beasts locked in combat—one half-human, one fully transformed. It was majestic and terrifying, and all I could think was that I wanted to survive long enough to check on my books. The dead chattered in my ears and the servants fled and I did what a mother does—I kept my son safe. My body between theirs; my blood upon the cracked stairs. Well, we know what happened with that, don’t we?

My husband died, my son lived, and I stayed in the castle. I spent hours trying to fix the library; I enlisted the other dead to help, and together, we repaired it, even though it is not how it used to be. In time, we even replaced the few servants who had come back after the fight. Each night I sang my son to sleep, as if he was small, and I tricked myself into thinking that he heard me. And perhaps he did.

And now you’re here, with your lost father and your horse and your uncanny ability to hear me. Forgive me, if I feel a kinship; your story is so very like mine. Even down to your love of my son and my books and my very home itself. We are talkative bastards, indeed, aren’t we?

But be careful, my dear, when you kiss him. 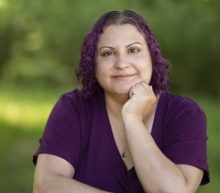 Jenny Rae Rappaport has been published in Lightspeed Magazine, Escape Pod, and Daily Science Fiction, among other magazines. She is a graduate of the Odyssey Writing Workshop, and holds a BA in Creative Writing from Carnegie Mellon University. In the past, she has worked as a literary agent, a marine sciences field guide, and spent a semester observing monkeys as an intern with the Pittsburgh Zoo. Jenny lives in New Jersey with her family, where she divides most of her time between writing and herding small children. She can be found online at jennyrae.com and on Twitter at @jennyrae.