The story of Chef Buzzati’s sudden and horrifying fall from the heights of fine dining is well known. However, given that the culinary innovations and legal ramifications are still being debated today, a recap may be in order.

Elena Buzzati was born to owners of an unremarkable Italian diner in the suburbs of New Jersey in 2024. She grew up surrounded by the scents of roasting meats and the hot gurgle of the deep frier. It sickened her. The headstrong Buzzati declared herself a vegetarian at age six. She had a strong bond with animals and is reported to have spent much of her childhood behind the diner befriending stray squirrels and pigeons. Her parents were—depending on your point of view—conservative, old school, or close-minded, especially when it came to their livelihood. “You are rejecting your culinary heritage,” her distraught father, the son of a pig farmer, would say. Her mother opted for subterfuge, slipping cold cuts and bits of bacon into her daughter’s vegetable sandwiches and salads. Buzzati’s resolve didn’t waver. Indeed, it redoubled after her father’s fatal heart attack and her mother’s subsequent colon cancer.

A young adult now, Buzzati sold her roadside inheritance to developers—an easy financial decision given that the rise of self-driving trucks had decimated the diner industry—and moved to the city for culinary school. It was here that Buzzati first developed her signature “transgenic gastronomy,” in which the traits of different vegetables were combined to surprising results. Tomatoes that tasted of basil, sweet and spicy chiles, berries the size of melons. “For me, there’s no difference between the oven and the petri dish,” she would famously say in a primetime holoTV interview.

Her commitment to inventing new flavor profiles for vegetables, and her strong ethical commitment against eating meat, gave rise to her now famous nickname: The Salad Scientist. Buzzati’s rapid ascent through the culinary world was unprecedented, from her Michelin-star restaurant in New York City to her once ubiquitous line of dressings and seasonings. However, given her subsequent actions, we can assume the critics who taunted her with names like “The Weed Wacker” and “Elena Moo-zzati” didn’t go unnoticed.

Finding herself at the age of fifty-five having achieved her wildest dreams—serving legume tartines in Paris, catering a royal wedding in Buckingham Palace, and hosting a wildly popular augmented reality tour of Italy—Buzzati found herself restless. She never had children (no time) and had never married (who could keep up?). What was there left for her to do?

Buzzati realized she had only one thing left to master: meat. Buzzati had avoided flesh for fifty years, but she had done everything that could be done with tubers, berries, legumes, and fungi. Despite the hateful rumors spread by her competitors, there is no evidence Buzzati ever spliced in animal genes into any of her transgenic gastronomy creations. Meat was the last mountain she had to climb.

The announcement of Buzzati’s new restaurant, Voi, caused a stir among gourmands. “Can the Salad Scientist Sear a Steak?” read one headline. The restaurant was to be the height of class and exclusivity. Housed on the two-hundredth floor of the city’s tallest skyscraper, Voi’s waitlist was as long as the building was tall. Buzzati’s staff required a down payment as well as a blood sample for all hopeful epicureans.

After six months of intense experimentation in the kitchen and laboratory, Buzzati launched Voi. On opening day, the city’s finest, richest, and most famous gathered at the base of the skyscraper. As they rose up the building, the scents of the kitchen were pumped into the elevator. The janitorial staff reported puddles of drying drool on the elevators’ floors.

At the top, the exclusive guests were led to their preordained seats. After a round of wine—a Bordeaux blend made from grapes spliced with coco and chile pepper genes—the dishes arrived. Thin pink slices of carpaccio, roast leg, steak au poivre, spiced dumplings, mounds of red tartare. The guests devoured each one, and the moans of pleasure are said to have overwhelmed the robotic orchestra.

Finally, Buzzati herself appeared in a blood-smattered uniform to rapturous applause.

“Please, you must tell us what you served,” Arnold McEnroe, the famous critic, said. “It was a meat like none other I’ve tasted.” There were cheers of agreement. “Baboon spliced with turtle!” someone suggested. “No, duck crossed with pork!” The guests continued to guess until a blushing Buzzati quieted them. “No, no, nothing like that,” she said. “My opposition to eating animals is well known.”

A confused quiet filled the room. “But what is this?” McEnroe finally said, hoisting a half-eaten kabob. “So juicy! So succulent! You’re telling us it is plant based?”

Buzzati said it was not that either. “I served the only meat that is ethical to eat. One’s self.”

For us, today, we know how this story ends. But imagine yourself in the shoes of those diners. They were drunk on wine, patting bellies full of hot meat. They thought they were safe, warm, and fed. They had no idea what they were eating, not until the Voi staff rolled out the corpses of the guests. Each one a clone grown with the pinpricks of blood that Buzzati had demanded for admission. And each one only partial, with chunks sliced out here and hunks carved out there. The guests, confronted with their own mutilation, are said to have been struck dumb. Then the screaming started.

To this day, Buzzati refuses to explain her actions. Did she really believe this was an ethical path forward for a world that could never quit flesh? Or was the restaurant a high-profile stunt to show the world the barbarity of their dinners?

Sometimes insight comes from the strangest places. Whatever her intent, Buzzati unwittingly opened a new field of culinary exploration that we will be studying today. Now, if you will place your finger into the DNA sampler and switch on the meat printer, we can begin to cook. 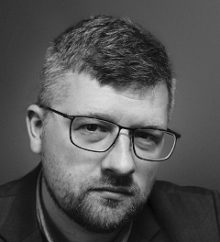 Lincoln Michel’s debut novel, The Body Scout (Orbit), was named one of the ten best SFF books of 2021 by The New York Times and one of the fifty best science fiction of all time by Esquire. He is also the author of the story collection Upright Beasts (Coffee House Press) and the co-editor of the Shirley Jackson Award-nominated anthologies Tiny Crimes (Catapult) and Tiny Nightmares (Catapult). His work appears in The Paris Review, Strange Horizons, F&SF, Granta, and previously in Lightspeed. You can find him online at lincolnmichel.com and his newsletter Counter Craft.