by RoboNinja
Translated by Brooke Bolander 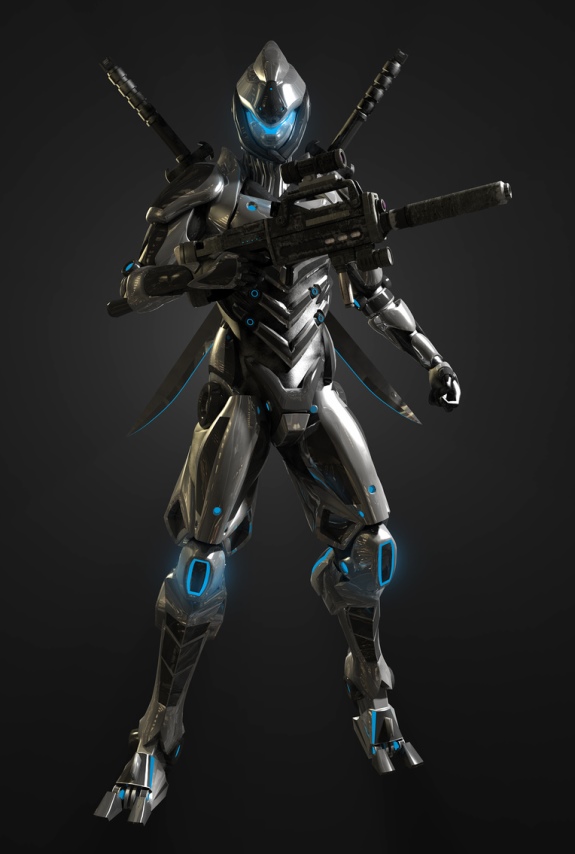 He had a name once, doled out by a loving mother in some antecedent time and place so distant it seems impossible the stars moved in their current polity. Gone now. Fallen and trampled to an obscure macule in the roadside mud, like his vanished arms and legs and viscera. Nothing would be changed in the knowing.

RoboNinja. A name for garbled tongues and garbled times. Interstate mudlarks peer at him from beneath grotty brows as he passes, eyes the size of headlamps reflecting the gelid glow of his visor. He once tried obscuring the light with handfuls of ash, smeared across LEDs and his shining silver carapace like the penitential marks of a sect long forgotten. It had worked for a time, until the monsoon came mocking once more.

What alloy is he, that does not rust or falter? What spirit turns the clockwork heart, the hydraulics hissing at each joint like chained and malignant demons? Why do his knees have running lights? None step forward to ask. He walks the highways alone. The blasted countryside sighs with relief to see the back of him, an unlucky silver coin passed on to some other gambler’s hand.

The elasticity of muscle. Meat and bone sliding together in perfect alignment. Blood humming faintly in veins delicate as silkworm strand. Things he never knew he missed. Taken from him, piece by piece, until nothing was left but machinery. Two katanas and a sweet-ass rail gun. Metallic fingers to crush the windpipe of God, should he ever come across him on his meanderings.

A story common in the days before the cataclysm. A rival clan. Cybernetic legs, replacing those lost in rooftop shadow-games. The moon never judged his lack of skill. First one arm and then the other, tumble-turning in the osseous light like shot-stricken passenger pigeons.

Remove the limbs of a ninja. Take the head and lungs and ice-cold heart of him, the eyes to see and the ears to hear and the liver and lights and soul uncoiling beneath them like squid ink on the sea floor or a totally rad ninja smoke bomb. If one were to replace all the components and seal that third-rate warrior’s spirit inside a suit of living robotic armor, would it remain the same shinobi? Or would something ineffable be lost in the changing?

In his perambulations he comes across a city. Charred skyscrapers turned to skeletal slag, grasping for the sky like the clawed and blackened hands of sinners reaching from Hell toward some unobtainable beatitude. Leadbellied clouds visible through the rebar. Wasted shadows scuttling from the light he carries, dazzled by refulgence. Also there is a Waffle House. 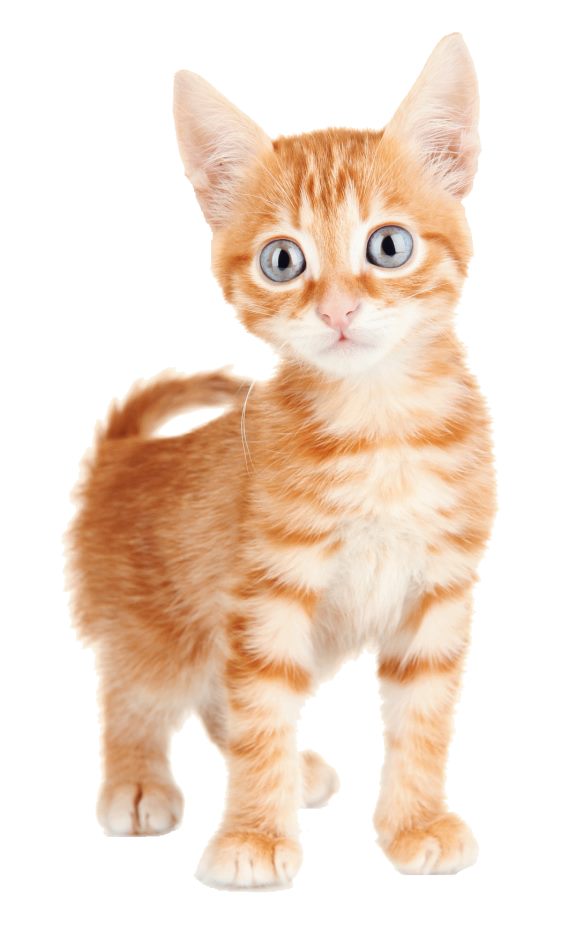 Rough men live here. He passes a knot of them, making sport of a tiny orange kitten. RoboNinja stops for little on the road. The world is a horror forgotten by God, completing its circumvolution over and over heedless as any tormented eidolon ever haunted the halls past midnight. He has seen trees impaled with the skulls of infants and roadsides smeared with the gore of feasts unimaginable. But he likes cats. Moreover, he has a railgun and two katanas. It takes little effort to send the souls of the men back to the formless and unthinking void they issued out of.

The kitten blinks up at him. Owlet in feline form. Fluffy fur matted by oil and who knows what else. A mew so quiet as to be almost imperceptible.

The way will be hard, he says to the grimalkin. I can’t promise you anything.

Purring. The flick of one small ear, indifferent.

All right then. Your choice.

He reaches down, plucks the kitten from the ground by its scruff and opens the secret robot ninja compartment in his chest. He can still feel it rumbling inside as they travel on down the road.

A family of ferals dwelt beneath the dojo when he was young. Lithe obscurations at the corners of his vision, here and then gone, like a name on the tip of your temporal lobe. Sunshine and shadow. The smell of fish stew cooking. Colors and textures and tastes leaching from his memory until at the last all cats are gray.

In a tenement building still mostly intact on the outskirts of the urbicolous RoboNinja sees a cluster of lights, yellow as torches held aloft by subterranean explorers in the wet wombs of the Earth. There are sentries at the door. Bedecked with strings of human teeth and ears like dried fungi wetted with the blood of previous owners and scraps of letters tattooed across their scarred faces in crude homebrewed inks, the scripture of damnation relentless.

He becomes shadow and fog, a penumbra across their awareness, clouding their minds so that he exists to them not at all.

Endless flights of stairs where stagnant water stands and piles of decaying plaster gather leaf-drift deep, slippery and stinking. Up and up, pneumatic joints untiring, toward the Babylonian vertex.

He can hear them. A revel in full swing. Feet stomping and voices shrieking glossalalic psalms of ravishment and drums thudding like the chambers of a vast human heart. Flesh slapping against flesh. The floor beneath him shudders, an old hound trying to rid itself of fleas. How many dwell above? Fifty? A hundred? How does the rotted hull of the thing contain them?

He gains the uppermost landing. Miasma thick enough to clot his visor. A glow like Hell’s own furnaces leaking beneath the door. He pushes it and steps inside.

The revelers smoke papaverine pipes of jade and obsidian and tiger’s eye rippling like the fur of some great beast gone extinct when men still hid in caves cowering obeisance to gods the shape of bears and lion, draped across the floor in various states of narcotic bliss and various states of undress and various states of coitus, languid or frantic or somewhere in-between. Bare flesh frescoed with painted handprints or rude symbols the meanings known only to the wearers. Musicians do violence to enormous drumskins with wooden sledgehammers roughly shaped into ram’s heads or play flutes of bone in sooty corners.

In the midst of all of this, a desk, and at that desk a man-shape, cowled and brooding.

In this age of malnutrition and early death he is a giant, shoulders the width of a bull’s. He unsteeples his fingers and makes a grand gesture with one splayed hand. RoboNinja’s head could easily fit inside his palm.

Quiet, my friends, quiet. We have a guest. Don’t be shy. Step right up, my robotic friend.

RoboNinja does, but not for any reasons but his own. Careful not to trod on fingers or toes or anything else left vulnerable by the human carpet. One or two hiss and snap at his ankles like dogs. He dodges them easily.

Well well, says the hooded man, regarding him. Well well. A robotic ninja, no less. Your legend precedes you, friend. Or should I say your ineptitude.

He doesn’t respond. His pride died with the last human part of him. Robots have no need for such emotions.

Good answer. Which brings me to my first question. Why are you here?

Another long pause. The only sound the crackling of the fires and the soft susurrus of bodies rubbing against one another.

The giant barks laughter. You? What does a robot need a job for? You don’t eat, do you?

This is a railgun. It is too badass to need ammo.

Then what are you interrupting my brooding for?

Robot fingers punch a button sequence on his chest. A pneumatic hiss. Gently he removes the sleeping kitten from inside. Holds out the spark of orange fur for examination.

The hooded man and the robot ninja regard one another over the expanse of desk and cat. What imp of the perverse capers in the mind of the man? What strange stirrings in the petrified and corroded heart of the automaton, to make him act thusly? None may know, until the day of judgment when all graves give up their dead and the final great ninja battle is joined.

I suppose I can do something to keep you in sardines. How would you feel if I asked you to be a marketing shill for Lightspeed?

Dead inside, as always.

That’s fair. But will you do it?

The kitten begins purring. The gears of the universe miniaturized and set to motion inside a body no bigger than a throwing star.

There is only one response. 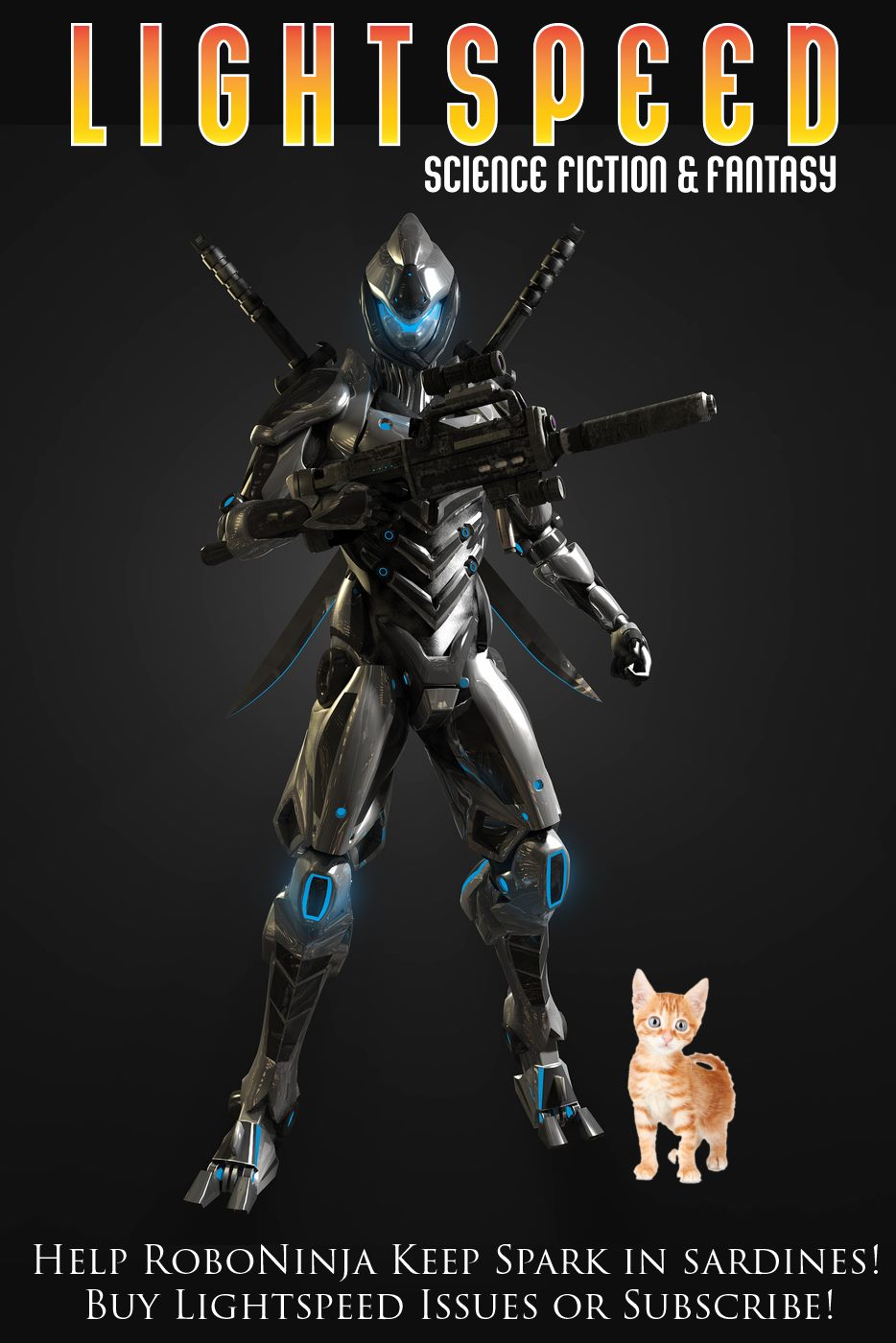 —With apologies and thanks to Cormac McCarthy 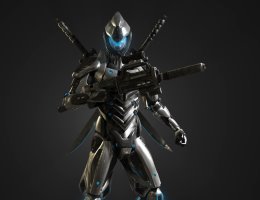 RoboNinja is ageless, the bones of his human clan long ago turned to sand and that sand to a fine dust. He carries two katanas across the slick carapace of his back, sharp as the knowledge of humanity’s innately violent nature. He also has a railgun because he is an awesome robot. Currently the marketing shill for Lightspeed, his interests include the study of the ancient art of ninjitsu, swords, railguns, cats, and existential dread. In lieu of a heart, a tiny orange kitten lives inside his robot chest. Each time you buy an issue of Lightspeed, RoboNinja receives a single sardine with which to feed him.

Brooke Bolander’s fiction has won the Nebula & Locus Awards and been shortlisted for the Hugo, Shirley Jackson, Sturgeon, World Fantasy, and British Fantasy Awards. Her work has been featured in Lightspeed, Strange Horizons, Uncanny, Tor.com, and the New York Times, among other venues. She currently resides in New York City.