The Lives of Riley

The sirens are growing louder. Riley doesn’t know how the peacekeepers found out—he was so careful, so sure he’d covered every trace of his existence, all of it—but that’s less important now than getting away. He cannot afford to make any more mistakes.

The night seems dark and empty as he leaves the warehouse through the back door, the sound of his hurried footsteps multiplied by more than echoes. Riley doesn’t need to conduct a headcount; he instinctively senses the presence of his other selves, knows that they are nearby and in their proper number. There are sixteen. That’s as far as he managed to get before this unexpected setback.

Riley is responsible. He is the one who came up with the plan and wrote the hack that turned his private d-mat booth into a personal duplicator. It was he who dreamed of being one but many, inerasable, safe from every danger.

That dream is still alive. If he can reach the reserve facility in Brooklyn, he can pick up where he left off. But if the peacekeepers catch him, they will erase him and the others without hesitation or remorse.

He owes it to his other selves to keep them alive, every one.

Riley has rehearsed this moment many times, in reality and in his mind, the better to be ready for any eventuality. He knows the escape route as well as he knows the contours of his own face. As the sirens grow louder, he tells himself to breathe steadily and think clearly. There is no need to panic. If he is quick and sure, he will get out with all his selves intact.

But how did the PKs know? What gave him away?

The recent days were unexceptional, spent training in twos and threes, or sleeping, or on the acts of togetherness that make multiplicity meaningful. (Sex isn’t strong enough a word. Neither is love. What he has with his sixteen other selves is unique in the course of human history.) There was only that one moment when he needed to get out of the warehouse and feel the sun on his face. No one saw him, and even if they had, one guy standing in the sunlight wasn’t going to ring any alarm bells.

Riley leads the way down the lane to where the hatch is hidden under a fake shrub. It’s undisturbed. He keys in the combination and waves his other selves ahead of him, into deeper darkness.

His other selves close behind him, their only sound the occasional soft splash where their feet encounter puddles, Riley sets a stiff pace. He pulls the hood of his jacket down, exposing his ears to the cold night air. He can no longer hear the sirens, which is not necessarily a good thing. There’s no way to tell from inside the tunnel if there will be PKs waiting for him at the other end.

He wishes he could use d-mat to whisk everyone instantly to safety. But that’s out of the question. The system would instantly detect multiple instances of the same genetic pattern and divert them all to Peacekeeper HQ, where they would be erased. Multiplicities are natural threats to singletons, who consider them dangerous, a threat to mundane life, which they are. He might as well turn himself and his other selves in right now if that was his plan.

No, they’ll just have to escape by old-fashioned means. Laneway, tunnel, a brief stretch of dangerously exposed street, and thence to the old subway line. He walked through the route a week ago, he knows it’s secure—so why does he feel so exposed? Isn’t this what he yearned for three days ago, in the privacy of his own mind?

That night up on the roof was thrilling. Air so fresh it brought tears to his eyes . . . and the stars! He’d forgotten their silvery touch.

Whatever went wrong, it’s going to be a long time before he dares poke his head up again.

The street at the far end of the tunnel seems deserted. Riley waits with his other selves for a full minute to make absolutely sure. The sirens sound like a herd of terrifying creatures, wailing wrathfully just out of sight. Riley feels profoundly afraid.

He doesn’t have to express this anxiety in words. He and his sixteen other selves are connected. They don’t need anything so banal as language to convey feelings or intent. They are the same person, after all; their experiences and feelings are carefully curated in order to be, and to remain, one. Their unified nature binds them, makes them strong. That’s what makes multiplicity special.

Flashing lights appear at the end of the street: blue and red, swirling like the angry thoughts of a beehive.

Riley hunkers down, feeling his other selves do exactly the same. They are one, and they are vulnerable. He must do everything in his power to keep them out of harm’s way. That’s what the warehouse had been for—close, restrictive, a prison in many ways, a prison from which he had sometimes yearned to escape, but safe.

Not safe enough, as it had turned out. Next time, he thinks—remembering the smell of flowers carried on a breeze through the warehouse air vent—next time he will be even more careful.

If no one moves or makes a sound, Riley is pretty sure that they’ll go undetected. The PKs at the end of the road don’t seem to be actively searching this neighbourhood. They are just being cautious, which suggests they don’t know that Riley is on the run. Maybe they don’t even know the purpose of the warehouse. Their information is incomplete.

Or maybe the PKs know everything and are trying to provoke him into coming out into the open. That is the one thing multiplicities must never do—not until they are large enough to withstand any singleton threat. And he is a long way from that. Not at seventeen, or even seventeen hundred. Maybe seventeen million.

Riley tells himself to be patient, as he often does, although it is hard. The PKs will give up, in time, with luck, and then when the threat has passed he can press on to Brooklyn and the completion of his mission.

The lights continue to flash at the end of the street. PKs are walking from curb to curb, casting shadows that dance and sway. Are they coming closer? Are they going away? It is hard to tell.

Riley, wrapped up in the silence of his other selves, hardly dares to breathe.

When someone moves nearby, his heart almost bursts from his chest.

In horror, he watches as one of his other selves breaks cover and runs out into the open.

Riley cannot believe his eyes. What is happening? How can this be possible? His sixteen other selves are copies of him, exactly him down to the last molecule. Why is this one behaving differently? Why is this one going rogue?

“Over here! They’re over here!”

Riley cannot believe his ears. Why is his other self doing this? They are the same. That’s the whole point of their existence. Created the same and sharing all the same experiences so they won’t ever grow apart. Riley would never betray his other selves, so why would one of them betray him?

A terrible possibility stops his thoughts cold like a slap out of the dark. Maybe his other selves aren’t all copies of him. Maybe this one is a fake. An intruder. A singleton spy!

The lights flash with increased intensity. Shadows sweep long down the street. The sirens grow louder, hungrier, as though the distant beasts have got their scent, and Riley’s heart begins to pound. His other selves—his real other selves—clutch him in terror, looking to him for a solution, a way out of this trap.

Back into the tunnel, Riley thinks, before the PKs see, that’s the only way . . .

Then the traitor, the alien, standing framed in a forest of sudden spotlights, raises one hand and points at Riley in the shadows, calling the doom of the peacekeepers down upon them all.

It’s a terrible thing to be exposed.

Riley should be fleeing for his life, but instead he hesitates. With the hood pulled forward, shadowing his face, he is caught by the stares of his sixteen other selves, who he has just condemned to death.

His heart breaks. All his worst fears have now been realized.

Two days ago, he stood at the warehouse’s only window, watching the clouds gliding by overhead. Glancing down, he saw one of his other selves step outside into the open air and stretch his arms above his head. That other self didn’t see him. Neither did his other self see the PK drone gliding around the corner of the building, cameras swivelling.

Riley ducked out of sight, and for two days has hoped against hope that their identical images were not captured. He hoped in silence, for fear of causing a rift between his other selves. Then had come the sirens, and their fearful flight into the night.

Seventeen cannot possibly slip by the PKs, but one might. It’s a simple solution that has haunted him ever since they left the warehouse.

And now: the confirmation that he is the only one who sees it, and why.

The others will never understand how his secret changed him. How the fear changed him. It was the one thing they never shared. The rift that formed despite his best intentions is now a gaping gulf. The carefully curated multiplicity is broken.

Riley hears shouting from the end of the road. The PKs are coming. If he goes now, he can escape the slaughter. When he gets to Brooklyn he can start the plan all over—him, the original, making other selves who will be identical to him. And this time, he thinks, he will prevail.

They are not me, he tells himself. I owe them nothing. 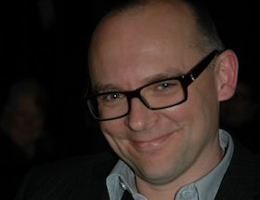 Sean Williams is a #1 New York Times bestselling author of over forty award-winning novels, one hundred short stories, and the odd odd poem. He lives in Adelaide, South Australia. His latest book is Hollowgirl, the third in the Twinmaker series.