It’s my habit, of an evening, to walk along the canal, a grey and sleepy little waterway that runs through our village in the low-lying Eastmarch. I follow the canal into the countryside for two miles, to the door of the Fighting Temeraire. This old stone inn by the water is a place where one can drink an excellent rum punch, and share the evening with country people and with those interesting travellers who, for their various reasons, prefer not to stay at the Rooster in the village centre. One Eve of St. Wallace, in the Temeraire’s ale room, fortune permitted me to clink tankards with no less a person than Captain Hector Drake, only a month before he met his appointment with the noose. I was sorry to hear of his fate; this country has lost one of its most convivial highwaymen. Let us drink to Drake. Inside the Temeraire, I have had good conversations with, at my guess, half the brigands, gypsies, vagabonds, roaming thespians, and other road-folk of the eastern lowlands. We are all served by the Temeraire’s owner, the magnificent Albina, of the monumental silhouette and jet-beaded breast, who is something of a goddess to her men. It is mostly men who come to the Fighting Temeraire, but one night in the middle of last November, I met a rare woman traveller.

The north wind was blowing sleet across the canal, the willows beside the water were bare, and like frail medusae they swayed violently in the wind. A small boat, come adrift from its moorings, knocked along by itself. Wrapped in an oilskin, clutching a lantern, I persevered through this autumn inclemency, wondering if I would meet anyone worth the journey.

I was rewarded, for that night the peregrine woman was there. Her colour was very black, a marvel to see in the Eastmarch. She was sitting alone in the ale room, eating a pie dinner. I had a rum punch by myself, so as not to seem rudely forward, then approached her. Her brow was high, her nose curved, and among her white teeth there were three gold ones. As she spoke our language well, and was pleasant, I said I would stand her a drink for a story. She replied that she did not drink alcohol, but would accept the price of her meal, to which I agreed.

Her name, she said, was Arnaude. I expected her to relate something of her homeland or the journey that had brought her here to our chilly country. However, she instead began to recite a story along the lines of a legend:

“Of all the cities that human beings have ever raised on this Earth, the one which they contrived to make closest to the perfect ideal was named Njaua. It was a place of marvels which cannot be described at all. Over many generations, its populace had learned the secrets of right conduct and good governance. They enjoyed peace, justice, liberty, and prosperity, and had abundant leisure, which they devoted to the quest for perfection. How they defined perfection is not known, but the quest itself generated numerous beneficial outcomes. It is written that Njaua possessed sublime architecture, incomparable gardens, and a street plan whose angles and proportions generated, through occult mathematics, vibrations in the ether which had tonic effects on body, mind, and soul. The scientists of Njaua created precious metals in alchemical ovens, and knew methods of fashioning automata which could perform menial labour, relieving the human citizens from all drudgery and allowing them to devote themselves to the cultivation of talent and virtue. Urbane talking beasts discoursed with the men and women in the salons and tea houses, and no hour passed unaccompanied by music.

“If you tried to reconstruct Njaua from this description, you would fail before you began. You could not really imagine how the buildings and gardens appeared, still less how the automata worked or the beasts spoke, or what the secrets of good living were. But if you could reconstruct it, you might notice the one flaw in this superb city. The flaw in Njaua was born of her own driving ideal: In concentrating on perfecting herself, she fell out of step with the far from perfect world around her. Her citizens learned memory as a skill, but they were selective in what they remembered. They forgot about cruelty and greed, and need and suffering. It did not occur to them that Njaua was an unguarded treasure, and a feast before the eyes of the hungry. Such disputes as arose among themselves they treated as opportunities to practice rhetoric and negotiation.

“A year arrived when one of the yellow khans came riding towards Njaua with an army of horsemen. Gold and blood were his muses. Word of sacked and incinerated cities preceded him, carried in broken mouths. Wisdom herself could not have negotiated with that man. The people of Njaua, who possessed courage as they possessed so many other virtues, chose to remain in their cherished city and defend it. However, they were not so foolish as to believe they would succeed. To save Njaua from dying utterly, they decided to preserve its essence. The vehicle they proposed for this task was a book, a codex, to contain a distilled record of Njaua: its history, plans of its streets and its great buildings, the essentials of its unique sciences, biographies of the most outstanding citizens, miniature copies of the greatest paintings in the galleries, sketches of sculpture and architecture, salient passages from the most important texts in the libraries, extracts from the scores of the finest music composed in the city during its long, luxurious life. It is not known how they decided what was the greatest, the most important, the most worthy of preservation. We do know that they made room in the book for the favourite proverbs of the people, their funniest jokes, and some of the things said by their children. Nor did they neglect to include a confession of their mistakes. They conceived this summary as a seed from which a new Njaua could be grown.

“The book was completed only hours before the conqueror’s trumpets were heard, and a citizen was chosen by lot to carry it away to safety. The one to whom the lot fell was a tiger from among the talking beasts. His name has not been preserved. The tiger journeyed for several years with the book strapped to his great striped back, going whichever way the khan did not, stopping in every town and village he came to. He met with varying receptions. Most of the people he encountered mistrusted him. Some tried to capture him, some marvelled and were afraid, and a few tried to worship him as a god. Others showed interest in the book, but explained that they had their own ways and were happy with them. Some wanted to buy the book as a curiosity, and they learned what a tiger’s yawn looks like. But a tiger is a patient animal. He continued to search for a people into whose keeping he could deliver the ember of his lost home.

“When the tiger was old and had walked around half the world, he arrived in a town called Vhar. The people who dwelled there, upon viewing the Book of Njaua, were filled with wonder and the desire to become great. They honoured the tiger and declared that they would henceforth be guided by the book. They taught him their language and learned his. In recognition of Njaua’s history, they resolved to make themselves enlightened, but rather than ignore the world, be a friend and an example to it, so that enlightenment should spread.

“Over the course of centuries, they achieved their desired society and built Vhar into a great-hearted and gracious city, full of marvels. These marvels were its own and different from those of Njaua, though in them were many traces of ideas from the book.

“Yet history was to repeat itself. Four centuries after the tiger’s appearance, warning of a barbarian invasion came to Vhar. The Vharese had not been as successful in spreading enlightenment as they had hoped. Truth be told, they had turned inward after too many rejections. They decided that they, too, would preserve their treasured home in a codex. However, they did one thing differently from their predecessors: They sent hundreds of citizens out, each bearing a single page of the final compilation, in the hope of spreading the influence of Vhar all over the world.”

Arnaude had been speaking without pause. Now she stopped, and laid her hands on the table. “Everything that I have just told you,” she said, “I learned from one page from the Book of Vhar. What became of the other pages, or of the Book of Njaua, I do not know. That one page I found in a tomb, buried among worthless pots. It took me two whole years to decipher the language. It was serendipitous, don’t you think, that I happened to find the page which summarises the history of both places and the construction of the books? The influence that Vhar, and through it Njaua, eventually had upon our world is unknown; but perhaps the fact that I was able to work out the language tells us something.”

I nodded and said aye. But privately I wondered whether she was telling me the truth or a tall tale. Even if she had found the page in a tomb as she said, how could she know that it was genuine? Surely it could be a forgery, someone’s joke. Or she could have honestly mistranslated it.

“Do you still have the page?” I asked.

She shook her head. “I gave it to a museum, in a country far from here. The scholars there were pleased to receive it. They have hopes of resurrecting something of Vhar, and even Njaua.”

She lifted her hands from the table and placed them in her lap. “I used to think of Time as a river,” she said. “Now I can only imagine it as a great, pitiless press. A little turn of its screw reduces an epic to a footnote of a footnote. Last year’s hero must this year curl up inside a cameo role, and be grateful for that much, no? Indeed, one must be fortunate to be chosen for imprisonment in a footnote.”

The morning is still, the sky above the village a wash of soft grey between one shower of rain and the next. The air smells of wet grass and woodsmoke, and the canal is a calm, smooth ribbon, reflecting the graceful willows, the reeds, the houses in the village, my world; things you will never know about if I do not tell you now: the old ivy-covered mill with the round window; a draught horse ambling past, drawing a yellow cart piled with melons; the sturdy, handsome bridge of red brick, with three arches; a wedding party crossing the bridge with whistles and tambourines; a green-winged duck landing with a splash.

Why do I choose to record those details, and not others? Only my taste, I suppose. I want my world to last; but I feel it slipping, going under. I cannot guess what might, one day, shatter this peace; but surely something will.

Everything before my eyes now strikes me as melancholy, even the cheerful procession. The anticipation of loss saddens me more than I can say. 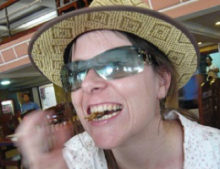 K.J. Bishop is the award-winning author of the surreal-Western-decadent novel The Etched City, and the collection That Book Your Mad Ancestor Wrote. She is also an artist, currently concentrating on bronze sculpture. She lives in Bangkok.