To Reach the Gate, She Must Leave Everything Behind

Death takes much and in return it offers Susan P— only clarity. She finds herself in a great gray desert and knows her life has ended. Clad in a royal dress, she carries a bow and quiver, and a finely-carved ivory horn dangles from her throat. A tremor of fear shakes her. She’s not possessed such things in many years. Has she returned to His world?

But Susan doesn’t recognize this bleak land, this starless black sky. She takes one step, then another. That feels right. She walks on, struggling under the bulk of her dress, the weighty gifts she carries. She has no use for the bow or the quiver, so she abandons them, those gifts she never wanted. She loathes violence, though her brothers had been adept at it.

Oh, her brothers, and Lucy! They had chosen that other world over their own, and she’d been left behind to toil in the aftermath of war, of their loss. And yet their absence aches.

She expects to struggle with the rings, but arthritis no longer troubles her. Those gifts from royal suitors slide easily off her fingers, fall away. The desert swallows them. If she’d married in that other world, would she have left behind a spouse, children, when she chased that hart back to Earth? A nightmarish thought, to add to many from that place. Better to think of her husband, long dead, and of Mildred, her wife in all but title. She hopes they await her, but fears that He does.

Her royal clothing impedes her. Her fingers remember what her mind has long forgotten; the dress’s bindings loosen. The God of that place had said she would always be a queen, but she can discard the dress, just as she left His world, just as she chose her own path over His demands.

Naked now, she half-fears she’s growing younger, as she had in the shock of her first return to Earth, when she’d been robbed of so much life, adolescence and all her youth, then forced to endure it all again. But she’s still herself, her wrinkles and scars her own, though her many aches have subsided.

Ahead looms an unassuming gate, rising from the sands, flanked by two massive guardians, animal-headed, ready to pounce. For a horrible moment, she thinks they are great maned cats, but that’s a trick of strange shadows. They’re nothing but bronze jackals. Susan is beyond His reach at last, and has not, as she feared, been pulled back to His realm in death.

The God of that world had promised her much and demanded more. The horn is heavier than it looks and more powerful. Even here it would summon aid. Susan is beyond such things. She hurls it away.

Unburdened at last, Susan approaches the Gate of the Dead, naked, alone, and willing. One last portal, she thinks, and steps through. 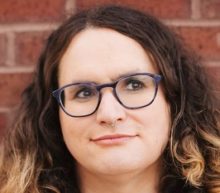 Izzy Wasserstein is a queer and trans woman who teaches writing and literature at a university on the American Great Plains and writes poetry and fiction. Her work has appeared in Beneath Ceaseless Skies, Clarkesworld, Fantasy, and elsewhere. She shares a home with her spouse Nora E. Derrington and their animal companions. She’s an enthusiastic member of the 2017 class of Clarion West. Her debut short story collection, All the Hometowns You Can’t Stay Away From, is forthcoming from Neon Hemlock Press in summer 2022.