We Will Be All Right

Tomorrow is Easter, and I will have to welcome into my home the woman who is going to murder my son.

I need to prepare side dishes in advance. Take a heaping bowl of injustice, mash it to a pulp, season with tears of rage, bake, and serve in a dish speckled with four-leaf clovers.

The question is, should I put the rat poison in hers alone, or would it be better for all of us to go together?

“Don’t worry, we’ll be careful,” the glowing couple assures me. But I have seen how they stand together, how their fingers and arms entwine as if the touch of skin on skin thrills them. I know how she will act, because I did it, too. I was a victim of the compulsion of spring, that sweet, brief time of yearning bodies, of gentle lips on downy hair, of being doubled by inhabiting one another. He was a noble, rash young man, ready to risk life for love. And I was shallow and impulsive. No, I didn’t do it the cautious, sensible way, either. I killed the man I loved in conceiving my son.

How quickly everything has changed. I can remember a time before the virulence became universal, when we still assumed a cure was coming. We used such carefree words then—a roll in the hay, a dalliance, a fling. Then we could smile and joke, before the consequence became so fatal—but just for the man, almost never for the woman. A gender-biased pathogen was unheard of then. Always before, the outcome—and the blame—had been for the woman to bear. Well, the blame is still ours, since we are the carriers, the vectors of death, but not for ourselves, only for them.

I can still hear the hush that followed when they told me my child was going to be a boy. Everyone was quietly sympathetic. I could have ended it then to avoid heartache, and gone back for a controlled, clinical pregnancy. But that would not have reversed the sweet, reckless act that caused him; it would just have destroyed all the good that came of it. Of course, once he was born, no baby could have been more precious. If only I could have sealed him in a bell jar then, never to grow, never to know the world. But I still hoped that he could dodge the ax.

The first time I saw him on a skateboard, I knew he was not going to listen to sensible persuasion, or believe he was not immortal. Eventually, there came a time when he would no longer let me stroke his hair, or press my cheek against his. It became embarrassing, momlike behavior. He was becoming an independent being, striking out on his own. What he didn’t know was that he was still part of me, circulating in my blood. The DNA of children lasts in their mothers’ eyes, muscles, and brains long after they are grown. Women, they say, become chimeras—part themselves, part their children, a patchwork creation stitched together like Frankenstein’s monster. The parts of me that are still him call out. They don’t want to die.

Before he was born, men had futures. They could plan, and hope. Now, even the ones who escape the scourge are like ghosts. I saw one in the supermarket yesterday. He looked furtive, guilty. They keep to themselves to avoid the speculative looks. We should not make pariahs of them, but we can’t help ourselves, since they call to mind the other ones who deserved to live. The ones who are wanted die, the outcasts and the odd survive.

Women run the world competently, of course. We fix the electrical grids and drive the trucks and plan the new urban centers, so much smaller now. We are the doctors looking for a cure. Everything still works, but on a reduced scale, as our ambitions are reduced. Still, in the long run, I doubt the race will survive. It is technologically possible to reproduce using stainless steel and cryogenics. But to do it that way, we must deny our heirloom instincts. When the millennia of animal existence rise in our blood, we must think of something else. Baseball, perhaps, or our bank accounts. We must deny ourselves the moon-shot thrills, the bungee plunge of love, the way Nature has done it forever.

Outside my kitchen window, it is April in the garden—season of forget-me-nots and false promises of resurrection. When I think of her entering my house tomorrow, I become a tigress with a mouthful of razor blades. Should I mix the warfarin in her custard cup now? Or lace the sweet potatoes with nightshade?

Or should I spare her for the sake of my future grandchild, if worse comes to worst? That potential person may be all that will survive of him. I hope it is a boy, so she will also know the lacerations of regret. We can watch together as some heedless girl murders her child, too.

Maybe, decades from now, we will find a kind of companionship together, two silent marble pietas, hand in hand, mothers full of grace and cruelty. All the Aprils of our future will come around dragging memories by the hand, our could-have-been children. But our role now, our commission from God and Evolution, is just to grieve.

I will put death back under the kitchen sink for now. Then I will put in my earbuds to block out the world, and perhaps we will be all right. 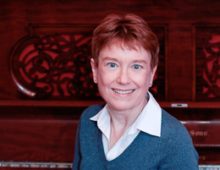 Carolyn Ives Gilman’s books include Dark Orbit, a space exploration adventure; Isles of the Forsaken and Ison of the Isles, a two-book fantasy about culture clash and revolution; and Halfway Human, a novel about gender and oppression. Her short fiction has appeared in Lightspeed, Clarkesworld, Fantasy and Science Fiction, The Year’s Best Science Fiction, Interzone, Universe, Full Spectrum, Realms of Fantasy, and others.  She has been nominated for the Nebula Award three times and for the Hugo twice. Gilman lives in Washington, D.C., and works as a freelance writer and museum consultant.  She is also author of seven nonfiction books about North American frontier and Native history.