You should know that we thought our parents were normal, ordinary, super basic. But they weren’t, at all. Let’s start with the way we found out, what some call “how it ended” and others call “the start of it all.”

The grid went down. It covered Oxhead and Oxhead Woods and The Annex at Oxhead, the gated communities within the one large gate. It was sudden. One father dropped to the bottom of a shower stall, water still beating down on them. A few mothers collapsed onto kitchen tile, heads lightly bouncing. A half dozen parents stopped, mid-breaststroke, while doing laps. They floated then slowly spun, face down in the community pools. (Oxhead had so many pools.) A lot of parents folded over steering wheels—jerking and slumping as their cars bumped curbs or rolled into traffic or trees or across lawns or cars banging into cars. Their legs went slack, sliding off of gas pedals, causing so many slow-motion accidents.

But they didn’t just go from animate to inanimate. One thing we agreed on: light inside each of them—something like a soul—had been there and then not. Their inner lights went out, one by one. We were witnessing someone’s death. Therefore, they had to have been alive.

We can’t blame ourselves for not knowing. We were too young to start off, then too consumed with surviving middle school. By high school, we were sexually obsessed. High school was ripe with longing. Sex floated in the air like a thick and gauzy pollen. It was everywhere and clung to us. An electrified pollen. Something that made us buzz—as if each of us was a bud with a Queen bee trapped inside.

And the tech was really good. And the outside world was not great—when has it ever been great? People think there were Good Old Days, but there’s only that cataract-past, seen through a blinding fog. Why question a gated community that takes care of its own?

Most of all, we’ve learned this: what you present to a child as normal is normal. They have no other context. Parents translate humanity, the world, its dangers, and its means of survival. So, when it broke down, two things happened—as our parents lurched and fell and twitched and died: 1. Nothing made sense. We were shattered. And 2. The truth came together for each of us at different speeds and then we had to make decisions.

The people who saw it as the end didn’t question what life offers.

Those who saw it as the beginning started asking questions.

Sex. That was the cause. It’s fitting. One generation’s quest for sex led to the older generation’s death. It’s not Freudian in a tidy way, but it mucks around in the same mud.

Lei Chiang and June Lessing wanted to have sex and couldn’t find a secluded spot. We had so much surveillance, the neighborhood watch cameras, the constant eye of home security. Even the wooded lots reserved for future developments (Oxheads on and on as far as the eye could see) were tracked.

Lei and June were tech geniuses, A-level gamers who wanted to have sex. Protected sex, they weren’t naïve. The plan: take down the grid so that they could get out of their houses and have sex—unseen—in the secluded storage room of the community greenhouse. From their bedrooms, they worked virtually, in sync. Their hack had to be perfect, their hits time-released, precisely.

They chose a Friday. They wanted a couple of hours, ideally, to feel like grown-ups, to linger on the cot in the greenhouse’s storage room, amid seeds and soil bags, the acrid pinch of light fertilizers. They chose late afternoon. If things went well, dusk would settle in and they’d walk the greenhouse in the gathering dark, lush whisper of ferns, bobbing fruit, the bristling nettles. They’d hold hands and look up at the sky beyond the foggy panes.

We realized in retrospect that our parents’ scents were off. Riding beneath colognes and perfumes, there was something medicinal with the dusty burn of a heater or a curling iron slightly singeing freshly shampooed hair.

What we remember most clearly about that night? When they died, a flowering scent, a gusty release, a sweet rot plumed from each body. The air seemed almost misty with it.

Kids emerged from houses, calling for help. We shook our parents’ shoulders. We climbed out of dented cars and wandered into neighboring yards, in shock. We jumped into pools and dragged our parents’ bodies out.

The grid was completely down. Electricity surged—a distant thunderous boom—then went out. No way to call for an ambulance.

We attempted resuscitations in yards and on den carpeting, in beds, on sofas and patios and slate porches . . . We failed to bring them back and fell down on top of their bodies.

With the shouting, crying, calling for help, each house became a box vibrating with terror—reverberating through all the Oxhead neighborhoods. Every household had children. This was something else we should have noticed but didn’t. Why were there so many kids? When you’re a child, you think the world revolves around you. Oxhead did revolve around us.

It got dark. We gathered in the street. We didn’t want to go home. The theories started. That we’d been orphans—all along. “This is an orphanage run by replicas of our real parents.” (Many of us resembled our parents.) “Our parents loved us but knew they were going to die, maybe. And so they created this place.”

“What if they’re still alive and mega rich and this is elaborate babysitting?”

“I know my mother has been in there! I know it!” one girl said. “She looks at me in this way sometimes that’s so deep! What if this thing is an avatar she hops into and out of?”

We always came back to this: Why would anyone do this? We cried and hugged each other.

June and Lei found their dead parents—both dads grilling, one mother gardening, the other in her office, working late. They told no one what they’d done, not that night. Lei sprinted to June’s house. They told each other that the grid would be repaired. They’re not dead. It’ll go back to normal, it will! And they had sex in her bed. But won’t sex always be tinged with guilt and loss for them?

Shortly after midnight, lights came on. Ceiling fans began to rotate. Our parents flinched and gasped. They rolled over. They patted their chests as if they’d been coughing. They threw up pool water. They cried out. They stood up too fast. They called for us by name. Oxhead ringing again with voices in the dead of night.

In the following weeks, disinformation followed—You had a collective virus, children. The virus causes mass hallucinations. It happens. Let us show you this video . . .

Factions formed. Some decided to believe the disinformation and deny what they had seen. They wanted their parents back, regardless. They believe that if you’re lucky to be offered a safe childhood, you should accept it. Lei’s senior project included this line: Animals that are risk-takers—note the condor—are more likely to go extinct.

June was part of a group that wanted out. We believe that you can’t live a lie. We need to trust that people around us, the world, are real. We still want to have sex, but we’re afraid that whatever happened to our parents had to do with having us. We didn’t want to sacrifice ourselves for offspring. (We were too literal and didn’t understand parenthood.) We gathered our things, kissed the representations of our parents—we still loved them deeply. June had arranged for a limited hit to the outermost gate. We slipped through it.

We still don’t know what love is. 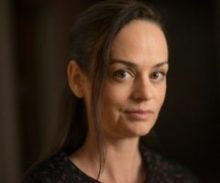 Julianna Baggott is the author of over a dozen novels, including Pure and The Seventh Book of Wonders, both New York Times Notable Books of the Year. Her work is in development for film/TV with options at Warner Brothers, Disney+, and Lionsgate. She has a forthcoming story collection, I’d Really Prefer Not to be Here with You, and a novella, The Wick. She teaches screenwriting at the Florida State University Film School.