Published in June 2019 (Issue 109) | 1760 words
© 2015 by Ellen Kushner. Originally published in Stories for Chip: A Tribute to Samuel R. Delany, edited by Nisi Shawl and Bill Campbell. Reprinted by permission of the author.

“Writers who (as it were) fetishize straightforwardness, yes—and see high style as a way to achieve it. That’s [Sir Thomas] Browne’s legacy. But not clarity.”

It’s a cold night in a cold city. Cold stone under cold starlight. He walks down a deserted street, sure of himself, sure of the weapon he bears. He’s not altogether surprised when the stranger steps out of the shadows.

“Hey,” he says to the newcomer. “You hungry? I’m going to friends with a fire and a big pot always bubbling on it.” By which we see that it’s not just his sword that defends him, whatever he may think.

The other stands very still. “You’re not what I thought you’d be,” he says flatly.

“Why not?” the swordsman asks, curious.

“The way they talk about you, I thought you would be all embroidered gloves and studded leather.”

The swordsman nods. He’s used to being misunderstood. “So are you hungry?” he asks again.

“Not for friends. Not for a bubbling pot of stew.”

Slowly, the swordsman nods. “Fame and glory, then. Studded gloves and embroidered leather.”

Without another word, he draws, and the other man does, too.

It’s almost too easy. This kid—he can see it’s a kid, now—is sure of his own moves; he was clearly top dog in all his classes. Good ripostes, full of verve and aggression. But he’s not always sure how to respond. He should be thinking more about defense. That’s something you polish with time.

The kid’s got his lower lip caught in his teeth. Relax your jaw, the swordsman thinks; but he’s not his teacher. Instead he says, “Fame and glory? There’s no one here to see you. No one will know. Ah! Nice move.”

More aggression now. The swordsman is having to enlist his own flawless defense. Not what he expected.

“No silks,” the kid pants, coming at him the length of the cobbles. “No leather—”

Was there something underfoot? Too dark to see what it was, or if it was, or if it’s just a kid who badly needs to win making him give way; but the swordsman finds himself on his back, with his opponent’s point at his neck.

“What I want,” the kid says. He pauses. “I don’t think the word has been invented.”

On his back, he nods his head—submitting, acquiescing, but also asking permission.

The other grants it with a similar nod.

He reaches into his jacket, pulls out a card, a Deuce of Lions. Across the corner is scribbled:

The House of Nine Doors

“Here,” he tells the kid. “Go here. They’ll know what to do with you. Strip down, and you’ll be shouting more words than you ever knew before.”

Without a word, the kid takes the card, sheathes his sword, and walks in the direction he wasn’t coming from. The swordsman gets up, and, without dusting himself off, proceeds to the place of food and friends.

He’s thinking of jewels. Which is not surprising, since he has them secreted all about his person. And secreted is the mot juste: It is a secret, a big secret, that he has even met with the one who gave them to him. (They are rumored to be mortal enemies.) A secret that he has been trusted with them. Him, and only him.

The idea is that no one could imagine them being transported thus, without a cordon of security—and that he alone has the requisite skills to ensure they reach their destination, anyway.

It is well done, and neatly thought of.

He tries not thinking about jewels. Jewels in little pouches, sewn into special pockets all over his person, here, there, and everywhere, by a master tailor who knows every trick, so that not a single bulge reveals itself.

He whistles a tune he heard a girl sing once, something about sack and sherry. He doesn’t remember the words. But better not to whistle; don’t want to draw attention. On the other hand, any implication that he doesn’t want to draw attention could draw attention to him. This is a city of thieves. And he is passing through the higher reaches of the town, streets of fancy shops. He needs to look like a man without a care, like he belongs there—no, as if he’s on his way somewhere pleasant, not important, a picnic, or drinks with an old friend, on the other side of town. Just passing through. No jewels, no intention.

A woman coming from the opposite direction. Singing the song he was just whistling. A coincidence? Maybe. He has his eye on her nonetheless. She is small and lithe, gray-eyed and dark-haired. She isn’t looking at him, though; she’s looking at the shops, their wares laid out on boards elaborately carved and gilded, because this is that kind of street, trays of goodies depending from the sides of the shops themselves. When night comes, the display tables will be drawn up as shutters and heavily bolted. Right now, though, they’re open and displaying just a fraction of the lovely things inside, each one guarded by a self-important apprentice wielding a heavy baton.

His reflexes are too good. When she stumbles, crashes into a board, sending strung pearls and carved lapis tangling to the ground, when the ’prentice goes for her with his baton, the swordsman throws himself in the way, shouldering the ’prentice off, letting her grasp his forearm before she can go down.

He thinks she’ll make a run for it. But to his consternation, she just stands there, looking every bit as haughty as a woman that small can do. The ’prentice is torn between seizing her, and catching up all the precious wares before anyone else on the street can grab any.

She hasn’t apologized for the fall. But before too long, everything is back up on the boards, nested in their velvet as before.

“Count it,” she tells the flustered apprentice. “It’s all there.”

The swordsman should have gone his way; but that would have looked suspicious. So he stays.

A little crowd has gathered, of course. “Should I call the guard?” someone says.

“Count it,” the woman says again. “Or call your master if you will, and let him do the work. I weary of standing here under the implication of insult.”

Despite himself—or maybe because of it—the swordsman smiles. She doesn’t smile back; she doesn’t even look at him. She hasn’t thanked him, either.

“It’s all here,” the apprentice says at last. He nudges a final pearl back into perfect place. “Everything is as it should be.”

She continues to stare at him, her gray eyes sharp like steel. The unspoken word And? hangs in the air.

Finally she smiles, showing good white teeth. “Never mind,” she says. “A natural mistake. It could happen to anybody.”

The crowd parts to let her pass on down the street.

Relieved, the swordsman walks on the way he was going. What an odd woman! He wonders if he’ll see her again. He’s a bit shaken; this little excitement was not part of his plans. It will take him a while to start whistling again.

Especially when he touches one of the secret pockets of the sequestered jewels, and finds it empty. There is a small slit in the side.

One of them is bearded, the other clean-shaven. Each bears a long and elegant weapon with a surgeon’s point and a razor’s edge, each hilt a work of art, guards scrolled like the fine script of a legal document.

They meet at a crossroads. That is where significant things happen; everyone knows that. Encounters at a crossroads are rarely by chance, and never inconsequential.

The clean-shaven man says nothing. He is slim and young. He draws his weapon, for no apparent reason.

The bearded man has been around awhile. He knows his worth. “I don’t fight with strangers,” he says, and the other says, “But you’ve seen me before.”

“Where?” asks the bearded man.

“In your dreams,” the younger swordsman replies. He wears no gloves. His hands are chapped, rough, the veins rising on the back where his right fingers hold tight around the grip.

He has a companion, a weedy-looking fellow, dark like a crow, who cradles some kind of funny harp in his arms. The musician stands well back, at the edge of the point where two roads meet and form a V.

The bearded man, the dreamer, examines them both. He hasn’t seen them in his dreams—or if he has, it was so long ago he has forgotten—but he wants to, from now on.

Still, it doesn’t do to look weak. Speak first, or thrust last, but always maintain the upper hand.

“Don’t, then.” The hard-handed man throws back his head, showing off his bare neck, a pillar of light and shadow. “But by all means engage.”

“A playful duel? A duel of skill?”

“What are the stakes?”

The bearded man inclines his head. “And him? Your friend?” When he sees him from the corner of his eye, the strange musician does seem to mean something to him. But how? So young . . . “What does he play for?”

It’s a beautiful fight. They each want the other to win. Not so much duel as duet.

Halfway through, the young musician lifts his device and plays. The air is full of the scent of cinnamon, of city streets, of cigarette smoke and diesel fuel; of baking bread and new-cut oranges.

But something always does. 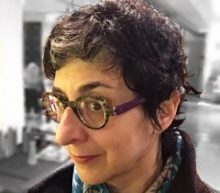 Ellen Kushner’s novel Swordspoint introduced readers to the city to which she has returned in two more novels, a growing handful of short stories and the collaborative serial prequel, Tremontaine (SerialBox.com). A longtime performer and public radio host, she narrated all three as audiobooks for Neil Gaiman Presents, winning an Audie Award for Swordspoint. Her award-winning Thomas the Rhymer is a Gollancz “Fantasy Masterwork.” With Holly Black, she co-edited Welcome to Bordertown. She has taught writing at Clarion, Odyssey, and Hollins University. She lives in New York City with her wife, author and educator Delia Sherman, and a great many theater and airplane ticket stubs.