When the witch came across the man whose leg had been shot through by the arrow he was hollering and disorderly and seemed like a bit of a nuisance. Still it could be said honestly that the man had a particular charm about him. For example when the witch asked if he was all right the man responded with only an agonized groan but beyond the groan there was also a look he gave her like the groaning in agony was a joke they alone were in on and she felt an immediate conspiratorial intimacy with the man with the shot leg.

They talked a while and she took him to her cabin.

At the cabin she tore open his pants to examine the bloodstained leg. The arrow was sticking out several inches. The wound around the arrow looked more like a geological formation like a salt flat than a wound. The witch clicked her tongue sharply.

It is against an artery. If I pull it out now you will die. But if you stay awhile I might be able to help you.

The man swallowed hard and gritted his teeth and agreed to stay with her awhile.

Many armies and delegations passed through the forest without the witch ever knowing or caring. For miles and miles surrounding her cabin the wood was so thickly veined and vexed with ages of stray magic cast off by the witch and others that almost all travelers went to whatever lengths necessary to avoid this part of the forest. More ignorant wanderers either had instincts keen enough to notice the scenery losing definition and turn around or fortunes poor enough to become meals for the native cryptid population.

As such the witch had not taken visitors in some time and maintained little interest in the politics of the material world. She might have guessed the man somehow got on the wrong side of his bow while hunting if not for the lumpy leather helmet and breastplate he wore. He must have dragged himself a long way from his company to end up in her part of the wood. The witch had not felt any other strangers in the surrounding web of magic.

She asked with whom he had been at war and why.

He said that he and several other fellows had been at war with an empire whose northernmost border met his birth nation’s southernmost. He had no explanation for why their political relations soured. Though he could read he no longer did much. His academic career was behind him. He had been conscripted. Whoever made trouble for those that housed and fed him. That was who he warred with. That they had been at war was why enough.

How were you shot?

His nostalgic jingoism deflated. I couldn’t take it he said. I ran away. I was set upon only a few hours from my company. As enemy or deserter. I don’t know. I couldn’t take another day. He cradled his head in his hands. I did terrible things.

The witch nodded and touched his shoulder. It was a very comforting and long touch.

You’ll forget about them.

At first the man lived almost entirely in a makeshift bed in the witch’s porous cabin. He would frequently offer to do work before falling over three steps from the bed.

Every morning the witch went to his side and muttered what sounded to the man like insults of a barbarian tongue. She muttered not at him but at the arrow which for all of the first six weeks was firm in his leg and appeared without change.

The wound with every hour became even more like a salt flat.

When a month was past the man asked what in the world the witch planned to do. The witch that morning had dragged him on a sort of gurney into the yard so that he could get a bit of sun. Now she carefully scrutinized a little twig before answering. I am enchanting the arrow but it is long work.

Is it really such a painstaking task to remove a splinter?

She threw the twig without looking and hit him in the ear before turning to face him. Her mouth was an indignant slant. It is not a question of just removing. How long would it take you to whittle that twig into an arrow? By hand without a stone?

He confessed that it would take a long time.

Come the second month the man was hopping around the witch’s hut on his one good leg. Both he and the witch had tried their hands at carving crutches but every pair was unwieldy and mismatched and if anything exacerbated the man’s limp. So instead he became a fantastically nimble hopper. They were together now in the barn as the witch was milking goats.

I must admit the leg feels better.

The witch held up a hand. Come help me a moment she said.

He hopped over and squatted down on his one good leg using the bad one like a kickstand.

He held the milking bucket for her.

You’re concerned that I still haven’t been able to remove the arrow.

I am concerned that it is sprouting.

She smiled an immensely self-congratulatory smile from behind the goat’s udder she was tugging. Good. That’s very good.

In October the little arrow had grown into a sapling. The wound mellowed to the color and texture of rich soil. The man could bend the knee slightly but it took a great deal of effort with all those roots restraining it.

How do they avoid the veins?

They go where they are told. Are you familiar at all with physiology?

He had been a doctor’s apprentice for a little over two months before a more studious and socially auspicious apprentice came along. He told her so.

Do you think it would be difficult to weave a sheet around a bone without killing its owner? Then around the muscles and then the veins as well?

It would be impossible.

She tossed oddly shaped sunset-colored fruits down from a tree. He caught most of them and put them in a basket. Impossible? Hm. Maybe that is why it takes a long time.

He asked what she meant.

To remove a splinter she said. She was indulging herself in another one of her smiles. That is why it takes a long time.

For the first time since he began staying there the witch made the man carry the basket of fruit all the way back to the hut.

A day came in April when the man was once again completely immobile. The arrow had gotten too big. The leg had a three-foot tree sprouting from it horizontally. For a while the witch had to trim its branches for the man to pass through doors but now it was too heavy for him to walk at all. The roots stretched the skin near his calf and kneecap into grotesque knobby shapes.

Can you remove the arrow now?

It took her until sunset to reassemble the gurney and drag the man into the yard. A few feet from the door of her hut the witch sat over the leg muttering what were certainly not simple insults. Slowly the tree’s roots unwound. With the gait of an octopus it crawled a few feet away and coiled into the soil.

The leg was more porous now than the witch’s shanty and the dawnlight from over the horizon made it glow like a leaf. The witch and the man both thought it looked a little like a honeycomb though neither told the other so.

He fell asleep in the yard and slept there three days straight. By that time the leg had withered to naught. Only a stump of thigh was left.

The tree was strong and green and thriving.

A little pebble. The arrow’s head had been dulled to a harmless little pebble by the growth of the tree’s roots. The witch secured it in a leather thong and gave it to the man as a totem. She smiled but the one-legged man did not smile back. He threw the pendant to the floor.

You promised to fix me he said and glared at the witch.

She had in their months together said those words so often they had become a joke between them. Never once was he able to keep from smiling at least a bit when she did. He felt foolish for his doubtful outburst and did not complain again.

Six years followed. The man hopped about and hunted in the surrounding forest for their dinner and labored on the witch’s farm. In return she taught him the most basic magic. He was clumsy at it and even slower to learn it than he had been with doctoring.

One day the man sat resting after a successful hunt and the witch gave him an axe. Without looking up he murmured unceremonious thanks. She gripped his shoulder and turned him to her.

Several years ago you cast this aside. The stone of this blade was once the head of the arrow in your leg. The handle is from one of the tree’s branches.

He gripped the axe and sat without dinner. He had long ago accepted that the leg was irretrievably lost and that he would never walk again and that beyond removing the arrow the witch’s only help was encouraging him to be patient with and at peace in his body no matter how reduced its form. In the morning the witch came to him. He was still staring at the axe deep in thought. He turned to look at her.

Cut down the tree she said.

He did as he was told.

At least a year she sat at the felled tree muttering shape into its length. On new moons she performed special rituals and went days without eating. The man often also went without eating though she told him it was unnecessary.

The tree was eager to please. It creaked and groaned and shrunk inward. Its leaves fled from it. Its bark went gray and eventually like a scab or cocoon cracked off. Where the tree had been—an ornately patterned and immaculately carved leg of very dark wood.

The witch took the man’s new leg and presented it to him. He attached it to his thigh stump and tested it on the ground. It felt strange. He said so.

Well you can still hop around as often as you like. And you can stay here awhile longer if you want. Until it feels right.

Thus they stood together in the caress of a slight breeze with the man looking beyond the witch and the distance of trees over her shoulder trying to think what all if anything might remain for him to return to and he took his time deciding what to do. 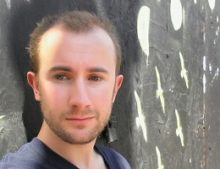 Max Wynne is a location-independent writer primarily based west of Utah. After receiving a window-dressing degree in neuroscience, they spent a few years wandering from state to state, sleeping in questionable spaces, and working a menagerie of menial jobs as a way of trying to wrap their head around their country’s economic and social realities. So far, so confused, but they intend to take the next few years to teach English in different countries and get some perspective. In lieu of more practical ideas, they dedicate most of their spare time to their first novel, Darwin’s Inferno. Look for it in bookstores everywhere in eight years. In the meantime, follow real fake news about their successful media career on Twitter, @cineurotic.