David Wyatt is an English artist specializing in illustration, including both F/SF and children’s books, as well as concept and character work. He has illustrated tales by many well-known authors, including Diana Wynne Jones, Terry Pratchett, Philip Pullman, and J. R. R. Tolkien, among others. He uses many different media for art and exercises his creativity in all sorts of forms. Residing in Devon, he is a known wanderer of moors. 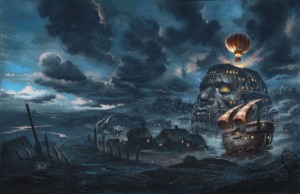 The scene depicted in “Fever Crumb” has the kind of apocalyptic feel that one would expect for prequels to Philip Reeve’s Mortal Engines books. Can you talk about how you chose the elements that came together to accomplish that?

The original U.K. edition was designed as a double cover; the idea was the viewer was in the cockpit of a wheeled contraption looking at the scene through a porthole. When the cover was opened, the whole picture was revealed. This meant I had to choose a strong central image as a focus, which would work in circular frame as well as the double page “reveal.” Once I read Fever Crumb it was fairly obvious to me that the balloon rising from the massive head was the way to go—it provided an unusual, dramatic focus with the opportunity to expand the scene with a stormy, post-apocalyptic landscape. I was aware that the original Mortal Engines quartet would be re-issued in a similar fashion, which is why I focused on machines and landscape rather than characters, as I felt that might be restrictive further down the line due to the constraints of the initial design. Philip is very visual in his storytelling, so it’s always easy to find something striking in his books that I can work with.

You work with many different media, though you’ve said elsewhere that you’ve moved to your Mac for a lot of work these days. How much choice do you have in that when starting a project for a new client, and what’s your favorite?

I’ve never had a client specify a medium before, so it’s really my choice, although time constraints dictate nearly all my book covers are done digitally these days. It’s not so much the initial creation that is the problem—it’s the alterations one is required to make because of marketing, last minute format changes, etc. Right now my favourite way of working is with pen and ink and watercolour, but that’s mostly for my own pleasure. As yet, I’ve not had the opportunity to produce images in this style commercially; they’re not really “in your face” enough for book covers.

What draws so many creative people to live in Devon? You talk some on your website about the history of the area, but what do you find there that comes nowhere else?

Well, I’m sure there are lots of places around the world that have a similar magic. For me, Dartmoor is at once strange and familiar, possibly because some of the art that inspired me as a kid was created by people who live here. There’s a curious mix of cosiness and otherworldliness. It’s as though lots of different times exist at once. Plus, there’re a lot of mossy rocks and twisty trees and mist, which I never get tired of drawing.

What’s the most common flaw you see in the work of novice illustrators?

Not so much a flaw, just a perfectly natural lack of experience/confidence, which I recognize as I had it too. When you first start out, it can be difficult to change things if asked, as you tend to have given your all to make one image the best you can. I used to find it hard to come up with an acceptable plan B, but it’s a lot easier now. . .

What sort of sparks must exist in a scene for it to lend itself readily to illustration?

I think the best illustrators can make even a mundane scene interesting. For example, a simple image of someone sitting on a chair can convey a multitude of feelings with use of lighting, body posture, perspective, etc. For me, it varies greatly depending on the context of the illustration. A book cover tends to demand a powerful, instantly readable image, so I will be looking for drama, atmosphere and strong shapes in the basic design. For interior illustrations, it depends on what mood I’m trying to achieve, be it amusing or serious, intimate or epic. Of course, you often have to choose a subject according to how much space is available on the page—there’s no point trying to show a gigantic spaceship looming over a city if there’s only inches to play with—best to show a couple of stunned faces looking skywards (as an example).

You’ve illustrated the works of numerous major fantasy authors, and your visions have been seen by millions of readers. What can top that for you? What would be your golden assignment?

I don’t really have any ambitions—when I was younger I quite liked the idea of putting my own stamp on various classics, but these days I much prefer working with new characters and creating their own worlds and mythologies. It’s partly cowardice; a lot of the classics have been illustrated so well it can be quite difficult to find a way of bringing something fresh and worthwhile to a new version.

What do you make of current trends toward more purely CG approaches to book covers, as opposed to traditional or hybrid approaches?

Book covers are predominantly adverts, tools to catch a potential buyer’s eye, and as such they will be subject to the fashions of the day. It’s perfectly natural, so I don’t have a problem with it. I tend to be impressed by strong design, whether it’s a scratchy charcoal drawing or photo-manipulation. When I first started out in the early nineties, I think I got work because I brought a simple, dynamic look to covers, due to my early love of comics. At the time, lots of children’s book covers were well-painted scenes from the story; I went for a kind of movie poster/graphic novel look.

You talk on your website about your musical past, and about how learning to play the guitar during art school was invaluable. Do you still play, and how does creativity in other areas influence or bleed into your other work?

Yes, I still play a lot; in a band, and recording my own stuff. I also do Argentinian Tango, which is another way of working with music. They are all creative (dancing, playing and drawing), but in distinctly different ways, like you are going up the same mountain from three different directions, each with their own challenges and rewards.

What projects are you working on right now?

I have a few things on the go—The Spook’s Blood, by Joseph Delaney, which is part of a long-running series (the first book, Spook’s Apprentice, is coming out as a film called Seventh Son next year). For younger children I’m illustrating Ice Spell, the third in the Frogspell series. Also at the moment I’m doing some character designs and concepts for a film; I’ve been having trouble visualizing things from multiple angles, so I’ve been making Sculpey models to help out, which is great fun.

What do you enjoy most about the modeling, and how has it affected your painting style?

I don’t normally make models, partly because of time constraints, but also because I don’t like using too much reference. I tend to draw things from my imagination; sometimes I’ll need a bit of help, like folds in clothes, or how light falls on hair in specific ways; in which case I might use reference for small areas that help sell the image. Because I often use a lot of dynamic perspective, I sometimes take snaps of myself from odd angles so I can check how the anatomy is working, etc.

The last model I made prior to the one I’m currently working on was Captain Nemo’s Nautilus (for Oceanology). I had to do a cutaway diagram of the interior, so I needed to know exactly how the ship might be constructed. The model I’m working on at the moment is of an unusual character, which will probably be made as a puppet, so I need to think more in three-dimensional terms as opposed to a one-off painting. You can breathe life into an idea quite quickly with clay; I find it fun because it reminds me of being a kid messing around with Plasticine . . .

J. T. Glover has published fiction, non-fiction, and poetry in Dark Recesses and Underground Voices, among other venues. Born and raised in the Pacific Northwest, he currently resides in Richmond, Virginia with his wife and a not inconsiderable number of aquatic friends. By day he is an academic reference librarian specializing in the Humanities.