The AIsource seem familiar. Have they appeared before?

This might not be clear to readers who only know me from my Lightspeed and Nightmare stories.

Approximately half of my short science fiction, and three of my novels, take place in a future history I catalog under the umbrella title “The AIsource Infection.” In fact, there should be a novella-length entry, “The Gorilla In a Tutu Principle, or Pecan Pie at Minnie and Earl’s,” in the current issue of Analog Science Fiction. The AIsource are from that series of stories, and “Sacrid’s Pod” represents the very first time any story related to that series has appeared in Lightspeed.

Adults think teenage rebellion is against them, but it’s not—it’s only acted against them to assert their independence. Were you ever a rebellious teen or did a certain teen inspire you to write this story?

I was not rebellious in the sense that you likely mean, but I was sure as hell no walk in the park. I was very much the problem kid, the nervous wreck. No particular teen inspired me in the creation of Sacrid. But she’s a common type.

I’m sure some helicopter parents wish they had a place like this to send their children, but it seems so heartless to ship a child away to protect them. However, there are boarding schools, where parents think their children will learn corrective behavior. So many bizarre stories happen in those places, and some turn out to be okay. Did you think of combining a boarding school with virtual reality to make it a glorified prison?

I didn’t see the service offered by the AIsource as a means of “correcting” the wayward child so much as removing her, to make certain there was never any chance of her bringing what the parents considered shame back to the family. This is shockingly not all that unusual in human history. Families have banished kids to foreign colonies, to the military, to convents and monasteries, and it was often a de facto means of confining them for life. In Ireland until fairly late in the twentieth century, it was considered perfectly reasonable to send a “disrespectful” or “too independent” girl to the Magdalene Laundries, where they worked for long hours in what amounted to slave conditions as prisoners under harsh discipline, and could be trapped there well into adulthood. So yeah, a prison.

Pods of the sort described in the story have already been introduced to the AIsource Infection Universe, in a story called “Blurred Lives.” More of that anon. But I will note that with their virtual reality component, the AIsource are trying to make these pods as unlike prisons as possible. It would be a lot worse, after all, were the offered entertainments withheld, if the prisoners were permitted no means of escape of madness.

Freedom, I wanted to scream freedom while reading this. The effects of the AI’s voice confined me to a small box. I really enjoyed your skill in how the protag’s view is part of this negative space. Even though you hadn’t described the protag and we hardly get to hear her, I could picture her so clearly. Was this the effect you were after and if so, are there any stories that inspired you to write this?

Many of my stories for Lightspeed in particular are challenges I set myself, and this one began as an attempt to write the entire story in the AIsource caretaker’s voice. I discovered while doing it that Sacrid really wanted to be heard. One reason I never described her—though I might if I return to her story, a genuine possibility—is that her rebellious ways do presumably include the cosmetic, and honestly, my wildest efforts to be outrageous could very easily devolve to quaint. (Then again, given the kind of society she came from, and the kind of parents who would do this, she easily could have just worn lipstick one day.)

No prior fiction comes to mind.

Needless to say, it was uncomfortable to read, yet I couldn’t put it down. It’s also interesting how the AI indicated most humans would rather get lost in artificial worlds. Somewhat like what we do today with YouTube, videogames, and obsessing over reality TV stars, one of which is now the U.S. President. Did you want this story to comment on how we need to experience authenticity and not take our freedom for granted? Do you think you’ll ever expand on this piece?

One of the questions asked by the story is whether a simulation capable of duplicating reality to a degree where no difference can be discerned is capable of overcoming the knowledge that one is also a prisoner. I think it depends on the person. Honestly, if you gave me a pod of the sort described in the story, or, if you prefer, a holodeck, and I found a way to customize experiences at will, I might never come out. But that’s just me. Sacrid has the extra added motivator of being pissed off.

Yes, the more I think about it, and this is happening even as I type these words, I think we will see Sacrid Henn again. You will certainly see the AIsource again. As I’ve said, they have fueled hundreds of thousands of words of fiction already, and this will continue.

Are you still thinking of delving into the romance genre? What’s next on your prolific writing agenda?

1) Yes, but don’t hold your breath. I have a long list of somedays.

2) Two stories that have occurred to me in the last few days, and which may or may not come to fruition, are “Want” and “Two Letters to My Father.” I have not written so much as a single word of either of them. I do not know if they’re “next.” We shall see. 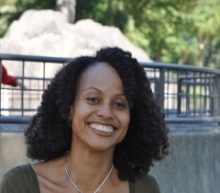 Adanze Asante is an African Diasporic writer, a black belt, and an Olympic weightlifter, creating weird stories in the Bedford Stuyvesant village on planet Brooklyn. If she’s not writing, she’s reading. If she’s not reading, she’s cooking gourmet vegan meals. She is a Clarion West graduate and is currently writing on a speculative-fiction novel. Her work is featured in Omenana, Wrap Around South, African Voices, and elsewhere. You can find her on Twitter @Adanze1.