“A Smell of Jet Fuel” centers around the 9/11 World Trade Center attacks. Do you have any personal connection or reaction to the original attacks that you’re comfortable talking about?

I was a teenager in the midwest in 2001. Later, in 2005, I lived in NYC for several years. But for the most part, no, I don’t have a personal connection. My connection is all public: experiencing, along with everyone else, how those events were used to reshape so much of American life, mostly for the worse. And they were used, very deliberately, to reshape life outside of America, definitely for the worse. Millions of Iraqis and Afghanis were killed, and millions more displaced and ruined by the strife American wars set in motion—wars that we are still perpetrating, two decades later. 9/11 didn’t cause those wars—choices by our leaders did. In a way, it’s a horrible twist of history that we can’t think about the World Trade Center attacks without thinking about all the violence and damage of the Iraq War and the War on Terror, because the attacks themselves were truly horrendous, and the pain of the victims, their families, and New Yorkers was and is very real. I hope my story can, in some small way, capture that dichotomy: the awfulness of the day, in tension with the compounding awfulness of the decades to come.

Time travel stories are an old standard in science fiction, and this one feels very much like a part of that long (but hopefully not looping) conversation. Are there any particular past stories that inspired you to write this, whether out of love or dissatisfaction or a more complex response?

This story is an homage to Ray Bradbury’s masterpiece “A Sound of Thunder.” In that story, as I’m sure many readers will remember, time travel is used to send big game hunters back millions of years to kill a tyrannosaurus rex. They have to be very careful not to step off the path, not to disturb anything (the T-rex was about to die, anyhow), lest they change millions of years of evolution. But of course they do, and when they return they find their intervention in history manifest not in biological ways, as one might expect, but in social ones: an ominous flipped election result and surreal changes to how words were spelled. In my opinion, this is one of the greatest twist endings in science fiction.

When I got the idea to riff on Bradbury with a story about time tourism to 9/11, I wanted to do two things: one, send up crass American tourist culture, and two, explore Bradbury’s butterfly effect on a different scale, rippling through the volatile and contingent history of the 21st century. But as I dug into “A Sound of Thunder,” it was so rich that it felt very doable to not just allude to Bradbury but to play by some of the same rules he set up. The idea of “Escapes” is even mentioned in Bradbury’s story, though not explored. So that became a thread I spun out further—and hopefully did justice to.

If you had access to a Machine, where in history would you take it? What catastrophe, triumph, or everyday beauty from the past would you like to witness?

Well, the rules always matter with this sort of question, don’t they? Will language be a barrier? Can I eavesdrop on secret meetings of presidents and spies? Assuming no to both, I think I’d like to visit a few of the great revolutionary upheavals: the French Revolution and the Russian Revolution, for instance. Events when, as Lenin put it, there were “weeks where decades happen.” Of course, we had quite a few of those weeks ourselves in the last year, and they were largely miserable to live through. But in revolutionary upheavals I think many also experience a potent sense of possibility, a feeling that maybe everyday, historically-anonymous humans can seize and shape their future, rather than having history handed to them by a ruling class. Even though revolutions often go sour, that’s an atmosphere I’d like to soak in.

This story could come across as resolutely hopeless, with a ruined climate and persistent symbols of intolerance. Yet, there was a future that Sita came from—and the two looked pretty similar in the decades after 9/11. Can you tell us about something going on today that gives you hope about our Future?

To be clear, I think this story is more pessimistic about our own time than about the broken future Brad is from. After all, Brad gets it when Sitra says she’d rather go home than live through the early twenty-first century. I wrote the story in May of 2020, which was quite a grim time in the American consciousness. (Now of course we feel like there is light at the end of the tunnel, even though the daily body count of global COVID deaths is still, when I write this in May of ’21, much higher than it was in those early months.)

Anyhow, hope! Well, the vaccine certainly gives me hope. It’s a scientific marvel, and getting vaxxed made me feel like a huge emotional burden was finally lifted—highly recommended! I’m also always encouraged by the ever-dropping costs of renewable energy deployment. Switching to solar and wind isn’t necessarily going to be easy, but in many ways it will be cheaper than simply keeping up the current system, and will come with lots of opportunities to disrupt existing inequalities. In fact, most of what we need to do to save the planet from climate change are things we need to do to save ourselves from capitalism. I find hope in energized movements to rebuild the American labor movement, like the push to unionize Amazon and pass the PRO Act. In many ways working people are at a nadir of class power—the world’s billionaires looted trillions of dollars from us during 2020—but there is a definite sense of an upswing there. And I find hope in the mass movements for racial justice that arose a year ago, when the organizing terrain couldn’t have been worse. Truly history is something that happens whether we feel like it or not, that’s bigger than any one of us, and even when we find ourselves beaten down and demoralized, that may be the very moment that others find the right conditions and impetus to rise up.

How does the future look for your own fiction? Do you have any upcoming projects you’d like people to watch for?

I just signed a contract to have a cli-fi fix-up novel I originally wrote as my master’s thesis published by Fordham University Press, and I’m very stoked about that. It’s a set of five novelettes, each one exploring the future of the UN climate negotiations and each set in a different socio-economic-climate scenario. So if you like this story’s tone, and its climate politics take on the branching possibilities of future history, I very much hope you keep an eye out for that book, likely early next year. 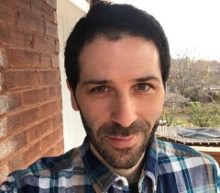