Not sure how much you want to reveal about the story in your interview, but your story involves the startling juxtaposition of a historical figure into a Victorian-era Martian colony. What inspired this? And can you describe the process of writing the story?

A couple of years back, there was a conversation going on about diversity in steampunk, how it didn’t all have to be set in some alternate British Empire. Which of course is so true it really shouldn’t need saying, though unhappily it does. But in the way of such conversations, it did start me thinking about, yup, the British Empire, and how thoroughly my own life and reading has been saturated with it (my mother is a classic daughter of empire, born in Rangoon and grew up in Kuala Lumpur and Singapore, where her father was stationed with the Scots Guards between the wars; and I had a classic middle-class English education, built around the British Eng-Lit canon), but I really hadn’t written about it at all. All my work was either contemporary Britain or far-flung historical fantasy.

At the same time, I’d recently moved from the U.K. to California, so I had something of that expatriate mindset going on; and we live a short walk from a NASA base and the SETI HQ, where I was going to a lot of talks about planetary science and space exploration. Curiosity had just touched down on Mars, so there was a preponderance of Red Planet science in my head; and all of this stuff kind of fell together in a rush, the way things do: steampunk, Mars, empire — oohhhh . . .

Since then, “if Mars were a province of the British Empire” has been the constant theme running through my head like an earworm. How it could have happened, what it might have meant, what it might imply for science, for politics, for international relations, for empire on two planets (or three, in fact, because the Russians have Venus).

One of the consequences is that I keep interrupting myself with new revelations — “Oh, hey, if Mars were a province of the British Empire, T.E. Lawrence would so have gone there,” and like that, over and over. So many damaged people, looking for a chance to reinvent themselves.

And of course Oscar Wilde would be one. (Hint: not a spoiler. The giveaway is in line one. It used to be earlier; I almost gave the story a subtitle, “The Ballad of Reading Wilde.”) After Reading Gaol, after Italy and Paris, he would totally have gone to Mars if the chance were there.

After that, I just followed my usual process: start with a title and a first line, and see what happens. My fiction is always character- and situation-driven; plot is just what people do, in given circumstances. So I put the people in the circumstances, and stand back to see what happens. It’s a process of discovery, for me as much as the reader.

In reading the story, I was particularly struck by the tone and the language, and how evocative they were of the Victorian adventure story. How did you find this voice? Was there research involved? Was it difficult to write an explicitly queer character in an era which is mostly familiar to us from books in which same-sex desire is hidden or absent?

The voice emerges from childhood saturation; honestly, no more research needed. I grew up reading Robert Louis Stevenson and Rider Haggard and Sax Rohmer and Conan Doyle; that voice is embedded. And then there was all the fun of writing about Oscar in a voice that Oscar would have deprecated . . .

And I don’t think queerness is really absent from the literature of the time, so much as unacknowledged. Look at E.W. Hornung’s stories about Raffles and Bunny; Graham Greene made that relationship explicit in his later play “The Return of A.J. Raffles,” but he was only pulling aside the curtain on what was already and absolutely inherent in the canon.

And I grew up in an atmosphere where gay sex had only recently and barely been made legal (“between consenting adults in private” was the rubric; you could still be arrested for holding hands in public, and gay pubs were raided as a matter of course), where coming out called for genuine physical courage, and custom and practice was still to keep it hidden; the kind of rendezvous the men are having in this story is something I absolutely recognize from England in the ’70s.

Throughout the story, there’s an undercurrent of shame and bitterness that seeps out of the narration. Your narrator, like the rest of the group, seems to have come to some understanding of his sexuality, but it’s uneasy, and that uneasiness seems, to me, to be what bursts out at the end and leads to some level of communication with the alien creature. What’s the parallel being drawn here between queerness and alien sexuality? What led you to this analogy?

See all of the above, I guess. The shame and the bitterness both were inculcated early. Gay sex was legalised in England in my childhood, but only for over-twenty-ones; which meant that all my adolescent sexual experience was criminal. I went to college in Scotland, where it was still illegal altogether. There was a gay liberation movement, but most gay men didn’t participate; the culture was to keep your head down, keep quiet, be discreet and hope that no one noticed. Unease was inherent, in any understanding of same-sex desire. (The legal experience was different for lesbians — the story we all believed at the time was that lesbian sex was never criminalised because Queen Victoria just couldn’t understand what women might do together — but the social and cultural experience I think was much the same.) If there’s an analogy being drawn here between what’s queer and what’s alien, I think it stems absolutely from the world I inhabited and the influences that shaped my thinking. I used to feel astonished that my grandfather was born into a world where as a child he never saw a motor-car, but before he died men had walked on the moon; these days I feel almost the same way about my own experience, where I was born into a world where gay sex was an imprisonable offence, and now even the prime minister is obliged to support gay marriage.

Finally, I noticed on your website that you’re planning a novel in this setting. Would you care to tell us anything about that or about other upcoming works?

Oh, I am planning so much, so very much in this setting. The novel is essentially Kipling on Mars (because of course he would have gone there; Kipling went everywhere), and it’s a sort of exploration of what colonialism means when the creatures whose land you’re colonising really don’t recognise the concept, and have very much their own agenda for bringing you there; while at the same time it’s a Big Dumb Object story, and a Vanished Race story, and another of those Edwardian adventures.

And there are more short stories, out already (the first is “The Burial of Sir John Mawe at Cassini,” which was published in Subterranean and will be reprinted in Gardner Dozois’ Year’s Best Science Fiction) or else forthcoming. And stepping away from Mars, there’s a collection of queer short stories, Bitter Waters from Lethe Press, which is currently shortlisted for a Lambda award; and there’s a short novel recently out, Being Small, which is about coming of age with a dead twin and a mad mother, and falling in with AIDS caregivers, and all that then ensues . . . 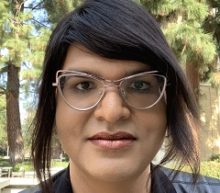 Naomi Kanakia is the author of two contemporary young adult novels, Enter Title Here (Disney ’16) and We Are Totally Normal (HarperTeen, ’20), both published under the name Rahul Kanakia. Additionally, her stories have appeared or are forthcoming in Asimov’s, Clarkesworld, F&SF, Lightspeed, The Indiana Review, and Nature. She lives in San Francisco with her wife and newborn daughter.