This is a fascinating piece, and started a deluge of heady thoughts while I read. To start, what was the seed of this idea? What came about first?

This story started with the title. It was just a phrase that popped into my head one day and became a brain worm of sorts. I had no story, no character, and no setting for it, but those two words felt like they had a lot of potential. It was also around this time that my mom was in the early stages of Alzheimer’s, and her condition made apparent to me the connection between our memories and how they coalesce to create who we are. Anything affecting these memories fundamentally alters the self, however the “self” might be conceived. It was several months later the other story elements emerged, and “The Memory Plague” started to come together. Then it took me four years to write it. Literally, four years. I’ve never struggled so hard with a story.

“The Memory Plague” deals heavily with the concept of what constitutes a “self,” and approaches the question from several angles. Have you encountered any other works (fiction, non-fiction, scientific studies, other art or media) that deal with these concepts that you would recommend?

While I am sure there are a great number of stories and books written on the topic, it’s not a field I have delved into all that much. This story was born from personal experience.

Given that alien memories infected this creature, causing its endless cycle of rebirth, (re)memory, and (re)death, the title works well. But I’m curious, why did you choose to call it a “plague?”

“The Memory Plague” is told from the perspective of an alien that shares collective experiences among its brethren—a classic “hive” mind species—and the presence of the human’s memories intermixed into their own has caused them to be exiled from the rest of their species, the ultimate quarantine, in a sense. If Audu-Omi-Rhu-Ba had been allowed to return to their ship, the human memories would have been transferred to the entire alien species through their shared consciousness, which from the perspective of the alien species would have led to the destruction of their entire civilization. From the alien perspective, this is a plague.

Is there any special significance to the names or physical designations of each component of Audu-Omi-Rhu-Ba?

I know this is probably a disappointing answer, but there is no significance to the names. For me the names were all about the right feel, and when strung together I wanted something with a slightly sing-song quality to it, while still sounding alien. Finally, it was important to me that all of the names be distinctive from each other because each of the forms are distinctive facets of the whole creature. The roles, however, are significant, and were intended to mirror what I thought were important facets of the human self: the primeval fears and instincts (Audu), curiosity (Omi), aggression (Rhu), and reasoned intellect (Ba).

What else are you working on? How has the pandemic affected your writing?

For the past few years, I’ve been working on a series of novels, the Calypto Cycle, and finishing “The Memory Plague” was my first foray back into short fiction in some time. I have since finished almost two more novels in my book series and about a half dozen other short stories. As for the pandemic, my family has been able to weather it fairly well (for now), although it has led to some of the darkest fiction I’ve ever written. Ironically, “The Memory Plague” is not a product of these times, but certainly seems to be fitting reading for them. 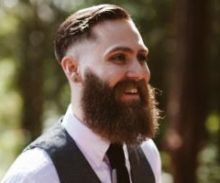 Elan Samuel grew up traveling between southern California and Israel. He now lives in Oakland with his partner and their three cats, and works as a writer and editor. He is currently pursuing an M.F.A. in creative writing at Western Colorado University. Find him on Twitter at @bonbonelan.