Your QDSF story centers around the cyborg subjects of a peace treaty which classifies them as weapons. How did those characters start for you?

Matters of trust are really interesting, especially in the context of a relationship. Here, I wanted a relationship where neither Jake nor Tyler are ever really sure whether they are friends or enemies, but they keep at it anyway. To some degree, that ambiguity is reflected in who they are. Neither of them are exactly human, but they aren’t not-human either. Making the secrets they keep military in nature gave everything a life-or-death aspect. It’s the one clear thing that’s necessary to drive the story when everything else is ambiguous.

The Chinese strategy game Go plays a significant part in the relationship between Jake and Tyler. Why did you choose that symbol for the larger machinations at work in the story?

Go suggested itself at first because, unlike chess, modern day computers don’t play it very well. (I should point out here that I play even worse.) This is, in part, because Go has a huge state space. To me, plays in Go can feel rather subtle. Placing a stone off by a point can have drastic ramifications. A fight on one side of the board may affect the situation on the other side of the board. There’s a lot to keep track of. Some of the techniques that work for computer chess don’t work for computer Go because computers don’t have the capacity. At a mundane level, this points out just how technologically advanced Jake is that he plays effectively a perfect game.

Given full information, Jake can think his way out of any situation. Of course, he’s hamstrung because at no point in this story does he ever have full information. Most of this story is him trying to puzzle where he stands in both the matter of life-and-death and his relationship with Tyler. Using Go also got across the fact that even though the story focused on this one relationship, their actions have wider ramifications. The local interactions between Jake and Tyler have an effect on things much larger than their personal lives.

By the end, it’s clear that Tyler is several steps ahead of everyone in his plans. Yet many of those schemes hinge upon trust he puts in Jake. Was he able to predict Jake’s actions to that degree, or was trusting Jake a leap of faith for him?

This is where I put on an enigmatic smile and say, “What do you think?”

Seriously, one of the things I love about short stories is that I can play with ambiguity. This story has a bunch of different readings and as the writer I don’t like to privilege any of them.

However, personally, I think if the cyborgs were that predictable, they wouldn’t have been all that useful during the war and wouldn’t be such a problem for the government now that the war is over. To me, it’s not obvious that Tyler is several steps ahead or if he has plunged ahead trusting that Jake will somehow figure things out because that’s what Jake does. He spends much of the story not exactly sure where he stands with Jake.

The final scene has more than one reading. I think you can also read it as Jake proposing a deal to Tyler that allows them to be together taking the leap of faith that Tyler will agree. However you read the story, I think they are both taking leaps of faith. Ultimately, they will always have secrets they can’t tell each other.

I enjoyed this story immensely. Do you have any upcoming work for us to look forward to?

Thank you! I’m glad you liked it.

I have a story called “Restore the Heart into Love” in the May/June issue of Uncanny Magazine. “Hold-time Violations” is forthcoming at Tor.com. Also, I have a story called “Selected Afterimages of the Fading” acquired for the anthology Defying Doomsday, to be published in 2016 by Twelve Planet Press. (This is assuming the Pozible campaign, which will be over by the time this spotlight is published, has succeeded.) 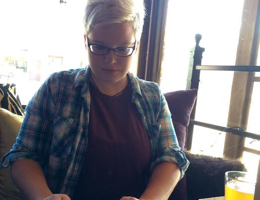