“The Day They Came” is such a fresh take on the “alien invasion” story, particularly in that we never actually see “them.” What were your influences in crafting this type of story in such a new and unusual way?

There’s always a worry when writing an alien invasion story that the aliens will be silly, no matter how hard you try to make them interesting. Alien invasion stories belong to a subgenre with a lot of history and expectation built into it. It’s very well-trod ground, so I kept asking myself what, besides aliens, this story was supposed to be about. Alien invasion stories can be about a lot of things besides aliens: politics and culture, religion and war, ecology and medicine, teenage angst, the end of the world, small sentient household appliances saving the neighborhood, etc. How important the aliens are in those stories varies, and so does how much we need to know about them for the story to work.

At some point, during one of the many iterations, I realized that what I was writing is a story about grief and how terribly isolating grief can be. That’s when I finally clued in to the fact that it didn’t matter who or what the aliens were. There might be a war happening somewhere on the planet; there might be giant bugs destroying cities; there might be ships the size of moons in the sky. But none of it matters, because this is the story about one person who has suffered a great personal loss, and everybody else in the world is going on without realizing that nothing will ever be the same. It’s a small story about being alone in the middle of a big event, and that’s a different kind of story than those that require the aliens to be well-developed and in the forefront.

You’ve written this story in the second person, which is a relatively rare choice for fiction. Moreover, you’ve kept from revealing any details about the age or gender of the main character. What are you able to accomplish in this voice that perhaps wouldn’t be possible in a more traditional first or third person format?

There’s something a bit invasive about the second person perspective. Right from the start the story is demanding attention in a way that can be a bit obnoxious, and every sentence is full of you you you you, which means that even if the main character (and implied narrator) is somebody completely different from the reader, there is still an imaginary finger pointing from the page outward.

I like the layer of discomfort that adds. I like that it makes it possible to tell a story in which the character’s immediate surroundings are explained in great detail, but the character is moving through it almost detached or separated, because the external world no longer matches what is going on in that character’s personal reality.

I avoided assigning a gender to the character initially because I thought it would be a fun challenge, and later kept it because I wanted to keep it as an unanswered question, something that the reader has to fill in—or not—as part of reading. I have to admit I didn’t think much about the character’s age at all, even though the resulting ambiguity serves the same purpose, and I’m now curious about what assumptions reader make about the age.

The most threatening moment in the story—both for the main character and the reader—is the moment where the television anchor speaks back to the main character. What was your inspiration for creating this scene?

In an early draft of the story, I had written to an end (a different one than the story has now) without that moment, but as a whole found it very unsatisfying. I knew something needed to happen. There needed to be a significant upset of the status quo. However much the world had changed, it had still settled into a new stability of sorts, with its own predictability, and I wanted to disturb it.

But I knew that whatever happened couldn’t be flashy or explosive; it was never going to be that kind of story. I wanted something quiet and creepy and startling, and I figured that the television talking back qualifies. Is it real? How does it work? Who’s making it happen? Does it happen to everybody? Is it a precursor to disappearance? Who knows? (I certainly don’t.) They’re questions that aren’t meant to have answers, because the very worst (or best, I suppose) type of dread is the kind that comes from something is just familiar enough to be tangible, but not familiar enough to be explicable.

You play a lot with the ideas of memory and time. For example, as time goes on, Mrs. Meester, who seems more and more unconcerned about her disappearing children, keeps forgetting that the main character’s father is dead, and continues to inquire after his health. How does this contribute to the overall sense of creeping horror in the story?

The very first thing I thought of when I first imagined this story was the first sentence, but the very second thing I thought of was, “What if there was an alien invasion and nobody noticed?” Of course somebody does notice, and that somebody is the main character, because there’s no story to tell if there’s nobody around to witness it. If an alien spaceship falls in the forest, etc.

There is often a grandeur to invasion stories—the fate of the entire planet and all of humanity is at stake!—but I was more interested in the small scale, which meant taking something as mundane as remembering what happened yesterday and messing it up. A mother who doesn’t know that her children have been disappearing, neighbors who don’t remember that the main character has suffered a personal tragedy, the fact that nobody else even knows there’s an invasion going on, and even if they did, they don’t seem to care, all of those are individual moments of wrongness that add up to the larger horror.

The story is called “The Day They Came,” and although you’ve described the way that the world is radically changed as the result of that coming, you never describe “them” or what the exact moment of their coming is like. What does this allow you, as a story-teller, to do with the plot?

In an invasion story in which the aliens are richly developed and present in the plot, it becomes very important who they are, what they want, where they’ve come from, how they interact with humans, all of that. But that’s not what I wanted to focus on, so I cut all of that out almost entirely.

When I shuffle the aliens out of the way, I give myself a chance to move other aspects of the story into those places of importance. We don’t know what the aliens are doing elsewhere on the planet, but right here, in this one rural county, they are disrupting families, changing routines, limiting resources, bleaching away parts of people’s minds, and making people disappear. That’s what happening to the world we see from the very limited perspective we have, and by the end the range shrinks down even more to the scale of the memories and decisions and fear inside one person’s mind.

When everything is strange and scary and uncertain, the human mind latches onto the familiar. I was playing with this idea in two ways. First, there is the difference between the main character, who knows that everything is changed, and the neighbors, who do not. It’s isolating, it’s unsettling, and it’s also a bit of salt in the wound of guilt and ambivalence that comes with losing a parent after a long, painful illness.

But alongside that are the incidences in which something strange and terrifying happening now reminds the character of life before. This is a character who got up and went to work and apologized for being late just hours after the father’s death; habit and familiarity are very important. The food, the strangeness in the woods, the parents and children in line, the disappearing neighbors, the taste of the water, all of it is linked to memories, because that is what the character is holding onto.

But it doesn’t last, and by the end there is a distance to all those memories, a filter through which they are no longer something clear and reliable. The world is too different, and the father is definitely gone, and there is very little left to cling to, so it’s time to go out and see what’s become of the world.

Does most of your work fall into the science fiction genre? What is your next project?

Most of my work has speculative elements, and quite a lot of it is science fiction, but I also write fantasy and stuff that could be either, or both. I like making things up, especially things that don’t exist in the real world. At any given time I have multiple short stories in various stages of completion, and I am currently working on a pair of YA urban fantasy novels. 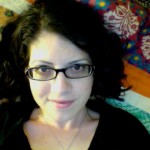 Gina Guadagnino compensates for being extremely short by cultivating her expansive vocabulary. She is overly-impressed by her education and the number of books in her personal library. A fiction writer and a blogger, she earns her living in social media, and still can’t believe that someone actually pays her to muck about on Facebook all day. Gina lives in exile in Florida with her husband, his rapier wit, and their precocious child.