In “Wilson’s Singularity,” we get a glimpse of a future world that asks the question: Would it be better to be ruled by something inhuman if it cured the world’s problems, or to live in an imperfect world and keep our humanity? Where did you get the inspiration to write this story about a failed utopia?

A combination of things—partly the insanity of the 2016 election campaigns and the disparate visions of America presented, none of which seem to address the real problems, except possibly Bernie Sanders, and even he has blinders on. The other was a conversation with a friend who despaired of us getting through the next decade under any of the candidates who said the American people don’t deserve democracy, that what we need is a benign dictatorship that takes good care of us.

That started me thinking about how well that would really work, and what if it wasn’t a human but a well-intentioned AI that took over, a dispassionate but caring force for good that still pissed off people? Could we ever be happy with a utopian society if we weren’t the architects, and would everyone ever be happy with it, whatever form it took? How could that happen in the first place and why—and then I was off and running . . .

The first draft had almost no details about their relationship and less about Jim . . . It was too much about the machine and how it took over and on reflection needed to be more about Wilson, to see all that through him. The rewrite explored everything much more deeply, and Jim’s backstory and the reasons for their relationship grew clearer as well.

The difference in their ages was always there, but it took on greater significance as Jim’s part in the story grew from someone using Wilson’s relationship to Unity as an excuse to leave him in the first draft, to a deeper problem with the status quo of their new world order. Fleshing them out moved the story away from the AI, which grew less prominent because the story was really about “us,” not it.

The distinction you make between them evolved as the core difference in their worldviews, shaped by how they grew up. I see generational differences around me in how the same situations or facts are viewed and that seemed the best way to express the central conflict of the story—as it was reflected in their relationship. That sounds obvious now, but getting there was about seeing the trees instead of the forest. To me, growing up in our violent world like Wilson, living in a new world where all are provided for equally, with no wars, no killing, no discrimination, seems almost ideal, even under a machine’s control.

But any Heaven will always be someone else’s Hell, and that became Jim’s background. It’s not that he wants the violence, but he didn’t know it, so he misses the freedom to choose in the abstract. The idea that his attraction to Wilson’s fame and the attendant advantages would outweigh his upbringing was interesting to me, and I’ve seen enough examples of that. It also laid the groundwork for his departure and return.

What was more interesting to me was the idea that he was Wilson’s Jiminy Cricket—that Jim could be with Wilson and stay true to his feelings. Expressing them gave Wilson a way to justify what he’d done to the world by countering Jim’s objections—but also in delivering his husband’s complaints to Unity to assuage any residual guilt. It’s a balance in their relationship that goes askew once Jim meets “the opposition” and is re-indoctrinated into his parents’ beliefs—the story became about that change coming to a head.

There’s quite a moving scene where Wilson reflects upon his first conversations with Unity, and how their bond developed over discussions of violence surrounding race in America. How do you feel like the current threats of today’s world—police brutality, ISIS, etc.—relate to our current state of technology? Do you think this makes us more connected or drawn apart?

I think it makes us both. We communicate almost continuously in smaller and smaller bursts, email chains, Facebook, texting, Twitter—a trend ultimately expressed in Instagram, where we reduce what we have to say to a single image. The adage that a picture tells a thousand words has become literally literal in that and emoticons.

Because of that constant interchange, I know more about what’s going on with more of my friends who live over a greater distance than ever before. But I see them less than ever. When the tech wasn’t there, we called or made more time to get together to satisfy the same level of intimacy. So my generation spends more time talking to more people, but in rooms alone, seeing less of them in person. That’s probably different for the current generation that uses social media more to link up in Meetups, or Tinder, etc.

That generational difference is essential, because for mine social media is a way to stay informed, for those younger it’s more a call to action—this is how Twitter overthrew Egypt, and how it’s changing world politics.

When it began, the Internet allowed us to congregate with like minds from the highest to lowest level. Now social media on phones and tablets lets people unite and organize in a way never before possible, with unprecedented portability in real time. We can use that to our advantage to reduce police brutality with live police officer cameras that send video directly to headquarters in real time to avoid tampering. But the technology also allows coordinated terrorism, like the bombings we saw in Belgium, and undoubtedly others.

What’s scared me most was a news story about young people in America in touch with ISIS recruiters by social media offering to fly over there to fight the good fight and being told no—stay home—you can do us more good as a resident sleeper agent. And we’re seeing it, people who’ve been here all their lives, completely off the radar, now ready to—well, do whatever. It’s as radical a change in warfare as eighteenth-century American rebels using guerilla warfare to pick off regimented British troops from hiding. We’re moving into new methods of conflict we’ve never had before.

I’m still more scared of homegrown white separatists than I am of Muslim extremists, because they’ve historically killed more Americans. A hacker recently sent racist recruitment flyers out of unsecured printers on college campuses across the country. What keeps them from hijacking drone bombers and sending them into black neighborhoods?

All that worries me more than a computer willing to feed and shelter everyone taking over the world, or even the Illuminati. I tell conspiracy theorists that I only wish there was an intelligent plan to turn us into one world. That seems preferable to the chaotic fight for dominance we have now, as the last vestiges of the conservative old order rages globally against the dying of their light as the majority of us grow past them. Surprise, yes, ultimately I am an optimist. We are meant to be better than this; we just have a lot of growing up to do, as long as we can survive long enough to do it.

What are some of your favorite AIs in science fiction?

It’s funny, there were artificial intelligences long before we called them that, usually housed in robot bodies. Those were my first. The Robot in Lost in Space was a friend I wish I had growing up. HAL 9000 may have been a killer, but it was well-meaning, just poorly programmed, so it was really a victim of its maker’s flaws, as are we all. Humanity is evidence that whatever higher power there is likes to experiment and that not all its creations are perfect. Speaking of godlike, Frankenstein’s monster, as played by Karloff . . . His broken brain was taken from a jar, but his mind was his own, an artificially bred intelligence. And Data. Who doesn’t love Data?

Are you currently working on something new, or do you have any upcoming projects we should keep an eye out for?

Oh yes, the curse and blessing of being wildly ADHD, I’m always busy . . . I have a regular review column in Fantastic Stories of the Imagination, “READ ME!,” and will be working my way through reviews of a three-foot-tall stack of books I’ve been promising to read for two years now. What better way to do it than by setting a bi-monthly deadline? That’s great fun to write and hopefully to read.

I’m editing a documentary film called Invisible Universe directed by M. Asli Dukan, as long as we keep funds coming in, so if you want to see it, go to the site and pitch in! She’s been shooting interviews and events for eight years, documenting the leading lights in the history of black speculative fiction. Seeing her footage of the amazing Octavia Butler and my dear departed friend Leslie Banks has been part of the pleasure of helping Asli realize her vision, as well as enjoying her many conversations with living legends like Sam Delany and pretty much everyone else you’d want to sit and chat with in genre fiction, along with academic experts, artists . . . it’s historic.

And last, but far from least, an email query from my first novel’s agent has inspired me to face my fears and stop delaying the conclusion of my Vampire Testaments trilogy. The Vampire Testaments page on Facebook will track my progress. I face the challenge with pure terror—I have a whole new world to build, set twenty years in New York’s future, but have already made major breakthroughs. Until that’s done at the end of the year, I’m happy to say that people can still read me here and in the What the #@&% Is That? anthology, edited by John Joseph Adams and Douglas Cohen! 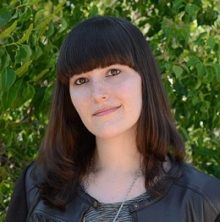 Tara Sim is the author of Timekeeper (Sky Pony Press, Nov. 1, 2016) and can typically be found wandering the wilds of the Bay Area, California. When she’s not chasing cats or lurking in bookstores, she writes books about magic, clocks, and explosives. Half-Indian and full geek, she eats too many samosas and awkwardly dances to Bhangra music. Follow her on Twitter at @EachStarAWorld, or check out her website at tarasim.com.