In your short story “Life-pod,” the separation of children from their parents is a recurring circumstance, such as the Eavesdropper’s shaded memory of a lost son, the sleeper’s melancholy dreams of childhood, the humans having been abducted from their homes, and the orphaned, adrift Life-pod itself. Was this the primary concept you set out to explore, or did the story emerge from a different idea contained within the tale (or from something else entirely)?

I didn’t start out with any theme in mind. This story is an example of one of my “quilt” stories. I have a file on my computer for writing practice where I start with a random sentence and see where it will take me. Sometimes some of these paragraphs seem to speak to each other or at least suggest a connection, so at a later stage I knit them together, add more details or scenes, and make the story. “Life-pod” was one of these. I think that the things I am interested in exploring, or observations about life that have been fermenting in my unconscious, naturally bubble up when I am doing these oblivious little writing exercises. I don’t always write like this, but when I do, it is a lot of fun to see what the story turns out to be — usually a surprise!

I guess I’ve always been interested in themes of home and family, since I have spent so much time apart from the place and the people who formed me. I am also well aware of the Indian colonial legacy from 200 years of British rule, and how it shapes us today. As an accidental Indian expatriate living in America, the notion of otherness fascinates me — how we humans distance each other and then attempt to build bridges of connection that inevitably call on us to transform in some way, sometimes terrifyingly so.

The Eavesdropper is able to glimpse the memory-dreams of the humans in stasis around her. In so doing, she stumbles upon the revelation that there exists an entity in an underlying reality — possibly the same presence that the aliens call the Hidden One — an entity so massive in scope that faster-than-light tachyons serve as its nervous system . . . a wonderfully compelling idea. What does this entity, be it sentient or not, represent to you? Have you explored the concept of such a being/force in other works — or, do you plan to?

The idea of the Hidden One came to me many years ago when I was thinking about invented aliens and the issue of scale. I used to live in Austin many years ago and had the privilege of multiple conversations with the eminent physicist George Sudarshan, who invented the concept of the tachyon. I mentioned the possibility of a galactic-scale alien and we chatted about how such a beast would be governed by compulsions quite alien to us, perhaps would not feel the need to reproduce, and so on. That conversation has been in my head for years after I moved from Austin, and it surfaced when I wrote this story for a special issue of Foundation back in 2007. I had lost touch with Dr. Sudarshan by then, but perhaps he would be pleased to know that the beast of our conversation ultimately showed up in a story!

I explore a similar (perhaps the same) beast in a short piece that is coming out in the Bestiary anthology edited by Ann VanderMeer. I suspect the Hidden One is going to show up in my work again, perhaps more than a few times.

For the pleasure of speculation: Why do you think the Eavesdropper was created? Do you think it was an act of betrayal on the narrator’s part, as she fears may be the case, or do you think there’s more to the story of her genesis?

Well, without infringing on the right of each reader to make the story their own, my own speculation is that the Eavesdropper was created as a bridge species. Betraying your own kind can sometimes be complicated, especially in a situation of conflict and limited mutual understanding. Perhaps under those conditions she thought it would be best for each side if she complied with the aliens’ demand; perhaps circumstances were such that she could not make a free choice, whatever that is. The thing is that she had to change in order to be the bridge — that distanced her from her own species but gave her powers that only the aliens possessed, so that she could, to some extent, experience the universe like them. But change is hard, which is why she is also alienated from herself.

You are a physicist as well as a fiction author. When writing, do you ever experience a conflict between the laws of hard science and the whimsy-potential of fiction? Are your academic and creative minds ever at odds?

I think the laws of physics make for interesting constraints rather than conflict between rigor and creativity. Being aware of such constraints, I have to come up with plausible ways to explain, for example, faster-than-light travel, which is where creativity of the scientific kind comes into play. Creatively and deliberately violating these constraints can be fun too, as long as you have some kind of plausibility argument for an alternative set of laws. So my academic and creative minds are not in conflict, in fact they are a kind of hybrid beast, each feeding the other. A story I wrote for Project Hieroglyph, “Entanglement,” resulted in an academic project on climate change that took me to the edge of the Arctic Ocean last year. And once I was conducting a fairly standard undergraduate physics lab to do with rotations and the law of conservation of angular momentum, and I had this vision of giant wheels spinning in empty space, and that ended up turning into a very whimsical story called “Conservation Laws.”

I am currently putting the finishing touches on a novella about a female proto-scientist on a very different world for an upcoming anthology. It is an adventure story with lots of lovely worldbuilding. And I also have a semi-secret project working on an unwieldy creature that is a sort of anti-novel. 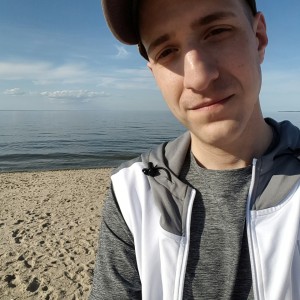