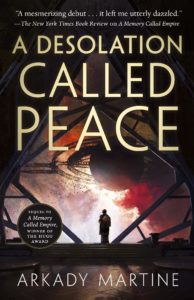 Hello again, readers, and hopefully you’re all having a better new year than the one that preceded it. For this month’s review, though, I’m actually going back to 2021 to take a look at A Desolation Called Peace, which is the follow-up to the Hugo-winning A Memory Called Empire by Arkady Martine, itself a fantastic piece of writing and one I highly recommend (and one you’ll want to read because there is almost no break between the events of the first book and the start of the second).

A Desolation Called Peace continues the journey of Mahit Dzmare, Ambassador from Lsel Station to the sprawling (and bloodthirsty) Teixcalaanli Empire, and her erstwhile friend/lover/foil Three Seagrass as the two of them attempt to navigate a treacherous new relationship between both Lsel Station and the Empire, as well as each other. Following the events of the first book (which I won’t spoil here, go read it), the Empire has found itself a new enemy to turn its fleets against, but it is an enemy unlike any the Empire has faced before, and Mahit and Three Seagrass find themselves pulled into another web of deceit and intrigue taking place on the very frontlines of the war itself.

As in her first book, Arkady Martine does a fantastic job building out not just the grand and imperial elements of world-building, but also the smaller, more intimate details that make her universe feel fully inhabited and cohesive, along with a master’s level course in the very structure of language and the ways it shapes our thinking. For me, this was probably the part I was most curious about—whether or not Martine would be able to replicate the incisive insights that helped A Memory Called Empire win the Hugo – and I’m quite glad to say that she definitely succeeds in bringing back the magic. Anyone who is a fan of the structure of thought, of how what we take for granted might seem totally alien to someone else, will definitely find just as much to enjoy in this book as there was in the first one.

That’s not to say that A Desolation Called Peace is bland philosophical treatising, though—far from it. Again, like her initial offering, Martine crafts an intriguing story full of carefully balanced mystery and action that will have any fan of science fiction on the edge of their seat, and it’s one that builds upon established characters while also introducing plenty of new faces that are just as compelling as the old. I particularly enjoyed the evolution of Mahit and Three Seagrass’ relationship as they each find themselves in roles that are familiar, yet subtly different than their previous interactions, and what that means for who they are to each other.

One thing I do have to point out, however, is that this is a book that requires you to pay attention, both to names as well as events. The Teixcalaanli nomenclature system of “number” followed by “noun” can lead to some similar mental associations when it comes to characters, and keeping track of who is doing what on behalf of whom caused me to occasionally require some backtracking just to be certain (granted, that might just be a me-problem, but it happened enough that I feel it’s worth addressing). That being said, the complexity of the book itself always made sense once the strands of the various storylines came together, and Martine delivers satisfying conclusions to the mysteries she weaves, so it’s well worth taking the extra effort to keep track of everything.

Overall, A Desolation Called Peace is another excellent display from an author who clearly knows what she’s doing, and one I recommend wholeheartedly. The characters are rich and varied, the environments are lushly illustrated, and the underlying themes of empire, expansion, sense, and self are explored in satisfying depth with plenty of room for second and third readings to catch what you missed the first time through. I’m not sure if Martine is planning on adding a third book to what is so far an engrossing duology, but if she does I will be more than happy to read it.

Read if: You’re not quite sure what the difference between barbarians and empire is; you’ve ever found yourself thinking in heroic couplets; you contemplate the luxury of sleep for a good ruler.