Book Review: Across the Sand, by Hugh Howey 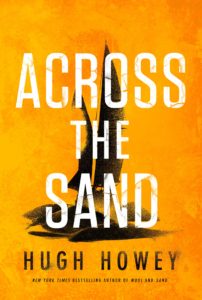 Salutations, word devourers, and welcome back to another book review. This month we’ll be looking at the newest novel by self-publishing sensation Hugh Howey–Across the Sand, a long awaited follow-up to his original novel Sand.

For those of you who have read Howey’s previous work, especially Wool, Across the Sand offers more of the same not-quite-dystopic-but-only-because-we’re-optimists-dystopic-future worldbuilding that he initially rose to fame on, but I’m happy to say that it’s not a formulaic write by numbers piece. Instead, Across the Sand fleshes out the world initially created by Sand while also expanding on what it means to be part of a family, a community, and a world that on first glance might be falling apart, but on second might be worth saving.

Across the Sand continues with the same set of characters from Sand (the family Axelrod, and associated hangers on) while adding some new ones set slightly in the future, but new readers need not fear—I hadn’t read Sand before reading Across the Sand and was still able to follow everything without feeling like I was missing integral plot points or character development. That being said, there were definitely points were I felt like there was a lot more backstory being hinted at than what was available in this book, but that’s easily rectified by reading the first novel. As a standalone novel, Across the Sand pulls its own weight.

In terms of the actual storyline, Howey’s luscious worldbuilding (which seems incredibly odd to say about someone who’s known for writing such arid environments) is on full display, as usual. The inhabitants of post-apocalyptic Colorado are well at home in their dusty environment of sand and blasted rock, and the lives they lead attempting to make something from the scattered remains of what came before is both compelling and melancholy in a way that takes some time to take hold, but is all the more powerful once it does. Like Wool, Across the Sand starts out as a series of seemingly scattered vignettes set in a shattered world, but ultimately comes together to tell a story about love, loss, yearning, and settling that resonates far beyond the initial environmental despair.

As a fan of Wool, one of the things I was looking forward to was Howey’s ability to make the commonplace seem obscure and magical, and in this Across the Sand did not disappoint. Initially entering the world, I felt unmoored and confused, a stranger in a strange land searching to make some sense of who was what and when was where. But Howey does an excellent job of filtering in new (and necessary) information in a measured way such that the broader picture unveils itself piece by satisfying piece all the way to a thrilling conclusion, and what was once opaque turns crystal clear after some time immersed in the context. What seemed like the tumbling grains of vaguely connected lives flowed together into a harmonious flow of family and fate that left me quite satisfied after the final curtain went down. I felt like I understood who each character was from a visceral level, and why they acted the way they did, as well as why they ended up where they were, which is a tough trick to pull off for even the best writers.

The other thing that struck me about Across the Sand is how easy Howey makes it seem when he’s playing with commonplace tropes that end up being not quite what you expect. Across the Sand is a coming of age story, except it’s not quite that, because some of the characters are already of age and have to deal with the stupidity of youth, some think they’re of age but are still caught up in the stupidity of youth, and others are just idiot kids who happen to luck their way through (or not!), but all of them are honest and believable in how they react to their world. It’s the story of a grand pirate adventure, only the seas are sand, the treasure is ancient trash, but there’s an actual treasure in understanding who you are as a human being and how that relates to the human beings around you.

Ultimately, Across the Sand is an uplifting story set in a downtrodden world, and one that feels especially pertinent in our current era full of walls and nation-state inhospitality, and I really hope you read it.

Read if: you’ve wondered what it would be like to soar beneath the sand; you do what needs doing to survive; you’ve ever wanted to grab your wizard rod and wreck some fools.