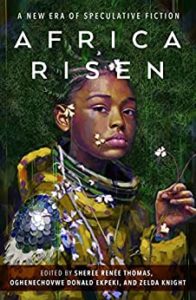 If you love short fiction as much as I do, a quick glance at the table of contents for Africa Risen should be enough to get you to buy this book. Steven Barnes is a science fiction legend who has been publishing since the days when very few Black authors were getting published in genre. While he is better known for his novels, ISFDB (The Internet Speculative Fiction Database; bit.ly/3JcjnkC) lists a number of short stories, the first going all the way back to 1974. Tobias S. Buckell is a fantastic short fictioneer and something of a legend in his own right, with enough stories to load up far more than his latest collection (Shoggoths in Traffic and Other Stories), and an array of awards nods, including a World Fantasy win for collection The Tangled Lands, coauthored with Paolo Bacigalupi. Maurice Broaddus is no slouch, with several novels out and a huge body of short fiction going back to the ’90s. And then, of course, there’s Tananarive Due, known best for beautifully written horror—her excellent collection Ghost Summer won a British Fantasy Award, and was named after her 2008 short story “Ghost Summer” (published in anthology The Ancestors), which won a Carl Brandon Award.

Yes, friends, if you’re a short fiction enthusiast, these are probably the folks whose names excite you. But this is Africa Risen, and if you’re a true short fiction enthusiast, there are a bunch of other people in here who should excite you as well. Wole Talabi comes to mind, a sharp writer who occasionally dons the editor’s role, and who has been recognized with a number of awards nominations and wins, his short “Wednesday’s Story” appeared in Lightspeed in 2016; Chinelo Onwualu comes to mind, who co-founded important speculative fiction magazine Omenana, and whose fiction has appeared in a number of wonderful venues, also with a number of awards nods; Akua Lezli Hope comes to mind, and Tobi Ogundiran, and Alexis Brooks de Vita, Tlotlo Tsamaase, and many others—I mean, seriously, most of the folks in this anthology . . .? If seeing them here doesn’t excite you, if it doesn’t make you eager to read this book, it is not because they lack skill or talent; it is not because they haven’t made their mark on the field; friend, I say this with love: it is because you haven’t been paying attention.

But don’t worry. Editors Sheree Renée Thomas, Oghenechovwe Donald Ekpeki, and Zelda Knight have brought them all together in one volume, and this is a gift. Besides, frankly, if none of the authors motivate you, seeing these three editors go to work on a project together, well that should be an automatic win.

As with most anthologies, not every story will land for every reader. The pieces here vary greatly in theme, style, and subject. Most of the entries are well-told, but I’ll go over a few that were standouts for me.

WC Dunlap is a bit newer to the publishing scene, so, unlike the authors mentioned above, if you don’t recognize the name, it’s a bit more forgivable. But I urge you to read a few of her pieces because she’s a great writer. I first read her in the inaugural issue of reborn FIYAH magazine, a story called “Revival” which was so good we reprinted it here in Lightspeed. I can also strongly recommend “The Front Line” published at Tor.com, which was reprinted in The Year’s Best African Speculative Fiction (2021): Volume 1. Here she has “March Magic” which lives up to the standards she has set for herself in the field. It’s a story about an interesting kind of witch, one who doesn’t just live in the swamp, she has nearly become part of the swamp. But she detaches from her deeply rooted state for an important event: a battle which is about to take place in social, physical, spiritual, and political fields. An engaging voice welcomes the reader while also delivering strong visual and tactile details, surrounding the reader in story. Subtext is immediate and powerful—for those who know how to read it: the places that some see as dangerous are, for her, home, a safe haven, away from “yoke and the whip”. The real dangers, in other words, are not gators, but people. What happens next reminds of me of Season three of American Horror Story, if it had centered Black perspectives instead of white ones, and if it had been far more creative instead of relying heavily on stereotypes: a gathering of a variety of witches, brought together to stand against racism on one of the most important days in 1963. All this is basically a long ramble to say: this piece is fun, powerful, brilliant.

Dilman Dila is a writer I haven’t read as much as some of the others, despite the author having been publishing stories for quite a while, so I was grateful to read “The Blue House” here. It’s an introspective story, with the introspection depicted largely as conflict between programs in the mind of an android who isn’t sure if she is still alive. In fact, she thinks she may have died a long time ago, and that she may have been rendered “functional” after her death. In retracing her survival in what is a desolate, essentially post-apocalyptic setting, both sentience and the nature of living are examined. It’s a good story which will appeal to readers at the intersection of intellectual meditation and harder science fiction.

“The Soul Would Have No Rainbow” was a great excuse to get to know Yvette Lisa Ndlovu’s writing. Langa’s grandmother has died. And while greedy relatives have taken all they could of what grandma left behind, they overlooked a mysterious cookbook, which Langa found. The cookbook, it turns out, reveals secrets about grandma, and in turn, about Langa herself. The narrative is beautifully told, with glimpses into harsh histories, and subtext around the problems still lingering from those histories. It feels mythical while being nicely grounded in human life; it’s gentle and intimate, and it’s a fantastic read.

I recently published Aline-Mwezi Niyonsenga’s “Saviour of the Light Market” in Fantasy Magazine, a story I found to be super creative and interesting, so it is, perhaps, unsurprising that I thoroughly enjoyed “Housewarming for a Lion Goddess”. It’s a story about new places and transitions, new states of mind, as well as the things we carry into those new places. The protagonist has just moved into a new apartment, and the guy she’s dating helps her move in. But our protagonist has secrets, and like many of us, she has to reconcile memories and past problems with the present, trying to manage her emotions and worries left by prior betrayals. And as many of us do in new relationships, the guy went and found out some things she may not want him to know. Unlike many of us, she just might have to kill him over it. The opening utilizes good imagery, and there are moments of seriously lovely writing. Something about the voice and style feels comfortable, lived in and real, as if everything is being shared by a good friend. It might also be the sense of knowing a character after only a few lines, of learning so much in a short span, and of it all feeling grounded in true-to-life experiences, yet still fascinating. Metaphor is strong throughout the story, and the depiction of the relationship is wonderful. The use of food in the narrative is a highlight, not to mention extremely relatable. Elements of subtext on gender and power elevate the story, as do the central themes around dealing with the past. Again, a very wordy way to say: this story is awesome!

If you crack this book open and don’t recognize most of the authors in here, you know what? It’s alright. You’re in for a treat. And I hope it will lead you to even more delightful reads. And if you are already familiar with most of these authors, then you probably don’t need me to tell you what to expect. You’re probably as eager as I was to dig into these stories. Thomas, Ekpeki, and Knight have assembled some of the best writers in the speculative fiction field, and that is something you simply don’t want to miss.