Book Review: Afro Puffs Are the Antennae of the Universe by Zig Zag Claybourne 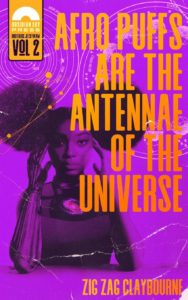 It’s the start of the new year of 2021. I’m writing this review in November 2020, right after the election. It’s a bit hard for me to contemplate what life will be like in January. Will the COVID vaccine be finally out? (Maybe.) Will there be a peaceful transition in the White House? (I hope so, but I don’t really know.) With all the questions, I needed a book that would distract me from the tumultuous times. A book that spoke to beauty and creativity but wasn’t overly complicated. Something that I could put down at any time but would also be there when I woke up with anxiety in the middle of the night.

Enter Zig Zag Claybourne and his soul food of a book, Afro Puffs Are the Antennae of the Universe.

Desiree Quicho, captain of the spaceship Aerie, and her crew have just pulled off an amazing heist of a transportation device, the Bilomatic Entrance, from an evil corporation bent on controlling the universe. Now all she wants to do is relax and build her house on the beach of Atlantis while she waits for her husband to return from his own interstellar trip with the Brothers Jetstream. But people keep trying to blow her plans up—literally. Also, the Bilomatic Entrance has somehow become sentient and now plans to wreak havoc by bringing humankind to enlightenment in its own way.

How to describe this book? Start with the absurdity of The Hitchhiker’s Guide to the Universe. Throw in the funkified redemption elements of Janelle Monáe’s ArchAndroid and George Clinton’s Atomic Dog. Sprinkle in the lyrical richness of James Baldwin and Parliament. Read snuggled on your couch, under blankets, during a time when the world makes no sense and you crave the comfort of women being confronted with insanity and saying, “Well, guess it’s up to us to save the world again.”

I will confess, I had a hard time with the beginning of the book. Afro Puffs is not exactly a sequel to Claybourne’s book The Brothers Jetstream: Leviathan, but readers will need to read that book in order to get the full experience. There were a lot of references to the Brothers Jetstream and the False Prophet Buford that might have been more impactful if I had read the first book. It was also hard to differentiate between the numerous characters and their motivations.

But what hooked me from page one was the language. It’s zany, its goofy, it’s poetic, sometimes deep, and oftentimes hilarious. I wish I could pull quotes from this book, because the writing is so smooth it’s like jazz. It made me decide to just roll with the book and let the language do its thing. And through that, it made me appreciate how Desiree approached life. There is something about a bunch of badass black women saving the world through general badassery, even if that meant capturing her enemies and then using their knowledge and skills to help instead of punishing them. There were some enemies, though, who did get their due comeuppance, and the revenge was sweet and hilarious.

Plus, the book comes with a soundtrack list. You can never go wrong with that.