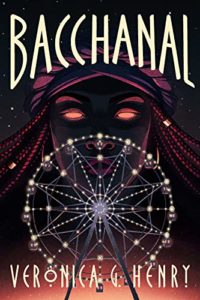 I’m a sucker for carnival stories, and Veronica Henry’s Bacchanal is the first one I’ve read that’s centered on a Black protagonist. Think of a Southern Gothic version of The Midnight Circus with a touch of Lovecraft Country.

Eliza Meeks can communicate with animals, though her gift is fickle; if she isn’t careful, she can accidentally kill the animal she’s trying to talk to. That doesn’t stop her from nabbing a caretaker job at a traveling carnival, Bacchanal, with only the clothes on her back and Mico, her pet marmoset. Eliza hopes to earn enough money to find her missing younger sister, Twiggy, the only family she has left. But as she travels with the carnival and gets to know its employees, she begins to learn that the carnival is not what it seems. For instance, she was recruited by Clay, who named himself the business owner of the carnival. What she doesn’t know is that the true owner is Ahiku, a demon masquerading as a Black woman named Geneva Broussard, and she is using the carnival to search for another demon who is purported to be stronger than her.

Bacchanal Carnival is enticing, but at the same time, sinister. People are drawn in by the strange attractions that have an African flair—stilt-walkers, drumming, kola nut vines infused with mind-altering drugs—but not all of them leave. People disappear, including children, captured as souls by Ahiku for bolstering her powers. Eliza brushes against trapped spirits, women gangsters, werewolves, West African warrior women bodyguards, and the carnies who are indebted to Ahiku. There’s Clay, the business Manager of Bacchanal carnival who does Ahiku’s dirty work to protect his son. There’s Jamey, whose aunt is the best-known gangster in Harlem. And there’s Ishe, doomed to never see his wife again. Everyone in the story seems to either have deep debts to pay for protection for loved ones, or are people who are unaware of their own roles to play. Even the animals Eliza is put in charge over hold their own secrets.

Henry winds the desperation of living in the Depression era with the tight edge Black people walked on existing in the Antebellum South. Ahiku’s preying as she searches for her foe is just a drop in the bucket. Does the Carnival provide a service in putting a few people out of their misery, even getting rid of those who are annoying or harming others? What of the children, who are taken from poor families unable to provide for them, or who are orphans? Are their souls better off held captive in Ahiku’s power? Clay, one of the more sympathetic characters in this book, wrestles with these questions, and I would have loved to see that more.

The story does suffer from focus on too many characters, which slows the pacing in the middle, but Henry makes up for it with her nail-biting scenes of tension as Eliza tries to discover the secrets of Ahiku, her own past, and how she is caught in forces who are willing to use her as a pawn for their own devices.