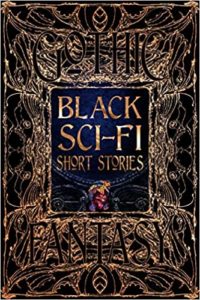 This anthology and I had a huge misunderstanding at first. Let me tell you, folks: I am not a fan of the cover, nor the title.

Not that the cover is “bad” or that the title is “wrong.” But when I initially glanced at the cover image, along with the word “gothic” thrown into the series title (not to mention that many in genre feel “sci-fi” is a term used mainly by people outside of “science fiction” literature), I had the impression of one of those anthologies which reprints old-timey stories. Penguin has a lot of these, such as The Penguin Book of Ghost Stories or The Penguin Book of the Undead. Cool books, and I used to love poring through them, but they just aren’t what I’m looking to cover in my Lightspeed reviews.

Turns out, not only did we have a misunderstanding, but this book is both wonderful and important. I’ll start with the “wonderful” and get to the “important” later.

Black Sci-Fi Short Stories opens with a brief but thoughtful foreward from Do You Dream of Terra-Two? author Temi Oh, who discusses the role of science fiction, the ways individuals and stories can inspire us, and the impact of seeing or not seeing the Black experience represented in science fiction, all beginning with an anecdote about Stephen Sondheim and Oscar Hammerstein. Sandra M. Grayson follows this with an erudite introduction which defines terms and places a number of the book’s older pieces—such as “The Comet” by W.E.B. Du Bois (published in 1920) and “Blake, or The Huts of America” by Martin R. Delany (published in two parts, in 1859 and 1861-62)—within the lineage of science fiction literature; Grayson explains what they are about, why they are important, and where they fit in the overall pantheon of science fiction.

From there, the book primarily offers original fiction and reprints of newer fiction, but cleverly ties these stories to that lineage of Black science fiction by placing them alongside those classic, historically important works. This allows the reader to understand the newer narratives in complex contexts, lending even more weight to an already solid set of pieces.

Favorites start with the first story in the book, James Beamon’s “An Empty, Hollow Interview.” In a future where people use gene therapy to remake themselves in the image of famous folks, especially long-dead famous folks, a particularly successful such a person has become a megastar by way of the genes and appearance of actress Hope Lange. The gene therapy comes at a high cost, and this cost is a signifier of the lengths individuals will go to just to become someone else. It’s star culture meets self-destructive, internalized hate. Through this lens, the narrative examines the pressures of society to be what you aren’t, and by inverse logic, becomes a treatise on the ways that existing as what you are is resistance.

K. Tempest Bradford’s “Élan Vital,” on one level is an exploration of love and sacrifice, in particular the powerful love for one’s mother. On another level, it’s a critique of the medical system, and our culture of disparity, wherein things which are perfectly possible are only available to the wealthy; the not-so-wealthy must sacrifice everything to keep up. Finally, it takes the idea just a bit further, to demonstrate the ways in which this kind of system exploits the bodies of the disenfranchised, to the benefit of the rich.

I’m going to say something about Tara Campbell’s “The Orb” that I very rarely say: I didn’t entirely get it, but I loved it. It was weird in all the right ways, and maybe the weirdness is the point, or maybe it’s just one of those stories which I need to read a few times to fully understand. In a secluded compound an enigmatic man has gathered a handful of people (read: cult) to raise “the Orb”: a firm, fleshy thing which grows as they feed and care for it. As said Orb grows, it raises new challenges, and eventually people start to disappear. The point-of-view character becomes more connected to the Orb as the story progresses, even undergoing strange physiological changes. If I were put on the spot, I’d say this is a superb piece about the control exerted by society and culture, told with strong feminist subtext. It feels allegorical, and the clearer themes are on giving up the self for unclear purposes and uncertain futures. Then again, were I put on the spot, a wiser answer might be “I’m not quite ready to talk about it yet.”

In Patty Nicole Johnson’s “The Line of Demarcation,” Doelle works in a warehouse reminiscent of an Amazon warehouse. At the urging of her company, she traded her arms for “Neolimbs” and was rewarded with higher income. But all is not as promised. The limbs don’t quite match her skin tone and, worse, they hurt like hell. As her aunt Deidra’s health declines, and as Deidra’s medical needs become more expensive, the company pressures Doelle to replace her legs as well. The story becomes a sharp reprimand of corporate culture, and of a medical industry which preys upon those in need, ultimately resulting in indentured servitude. It’s about class, but it’s also about products and systems which are designed with only certain segments of our culture in mind. It’s about false promises, but it takes the idea a step further: predatory companies (and people who benefit from them) are adaptable in the most insidious ways, using false promises as a lure. Try as you might to get out from under, they will eventually consume you, limb by limb.

Russell Nichols slays twice, first with “e-race,” in which Waldo Ellison is an old man and the future is coming quickly. In fact, it’s crashing through the door. Ellison finds himself forced to queue up for a mandatory eye operation which will erase everyone’s ability to “see color.” He tries to raise hell, first attempting to evoke solidarity in resistance to the procedure, and then to try to get thrown out. Both tactics fail. Through his struggles and the literalizing of metaphor Nichols presents a discussion around the complexity of racism, and the importance of maintaining a connection to our histories of resistance.

My notes for Nichols’s second story, “Giant Steps,” have three words etched above the rest, written large, in full caps: SO DAMN GOOD. [Editors’ Note: You can read “Giant Steps” in the March 2020 issue of Lightspeed.] The framing device is simple: Dr. Jenkins is on a trip to Saturn’s largest moon, Titan. Jenkins is making history and flying toward the culmination of a life of dreaming and planning. Striating this narrative are memories of key events which brought Jenkins to this moment, memories which throb in time to the moments of the trip. Through these memories we explore the pain of disillusionment, the need for belonging and a contradictory drive for independence, the impact of Othering, and the force and pressures—both external and internal—arising from notions of gender and race. The prose reads loosely like poetry, at times rhythmic, the power of words and their sounds delivering emotional resonance to the subconscious while lines, dialogue, and ideas engage the intellect. Take note, y’all. This is how it’s done.

Temi Oh rounds out my list of favorites with “Almost Too Good.” This is a slowly gripping story about a woman who becomes obsessed with having a child (though it’s told in second person, and expertly so), who discovers an odd but lovely tree. When she stands under the tree, she thinks she can see into the future. “Almost Too Good” is a beautiful meditation on faith, hope, perhaps even meaning, and is just the right amount of startling and strange.

It’s a wonderful set of stories, the strength of which moves me to believe that the stories which weren’t among my favorites will probably be favorites of other readers. You can buy this book for the quality of fiction and be happy. But I promised I’d talk about the “important” thing, remember?

In the course of sourcing a title for this month’s review, I also considered five other anthologies, three of which incorporate language about diversity or inclusivity in their marketing materials. Through examining their tables of contents and looking up authors I discovered that all five books featured very few or no Black authors—including one with an Octavia E. Butler quote emblazoned on an opening page. But there’s more. I have this new column over at The Magazine of Fantasy and Science Fiction, in which I tackle assumptions about the publishing industry. I haven’t addressed race in publishing (yet), but nonetheless, in going through buckets of data on topics, I’ve accidentally noticed a lot of other data about publishing, such as the paucity of Black attendees at respected writers workshops, and the infrequency of Black authors getting published at major markets. To throw some numbers in here, for example, one very respected, award-winning market which many pro authors consider to be “inclusive” or “diverse” published a total of three Black authors in nearly eighty original stories published in 2020. What I am seeing too often is overwhelmingly white ToCs, or, in cases where “diversity” is attempted, what I call exclusionary inclusion: an appearance of diversity while still excluding certain group(s), which often happens to be Black folks.

Despite the various social movements and outcries and even Twitter campaigns to raise awareness or effect change, my stumbling upon this book in email couldn’t have been more meaningful. It had become too obvious to me that Black voices are still largely ignored, underrepresented in major outlets, and that people in publishing are more interested in explaining why they aren’t publishing Black people than they are in actually publishing Black voices. I rediscovered this book in email after initially discarding it (see above), feeling disillusioned by the statistics and ToCs I’d seen. Thankfully I thought, let me look at this thing again.

This book stands on the shoulders of work such as Sheree Renée Thomas’s Dark Matter anthologies, and in companionship with resources such as Nisi Shawl’s A Crash Course in the History of Black Science Fiction web post (bit.ly/3wmdkmC). But it’s not just another great collection of “diverse voices.” By establishing a history of Black science fiction, one which goes undiscussed and unseen in many circles, first the book proves that Black voices have always been here, even if some readers have never heard of them, never seen them, never looked for them. Then, by presenting so many incredible stories by a host of contemporary authors—importantly, not just the “big names” which many people may find familiar—the book demonstrates that powerful Black voices are still trying to be heard, and that there is no rational reason for Black stories to be as absent from ToCs as they are. In this way this book importantly reveals a pattern of exclusion, one which continues still, and stands proudly against it. This book is nothing less than a powerful argument for Black science fiction to be recognized, to be seen, and to be appreciated on its own terms.

Wake up, folks. Get a copy, read some stories, and see what you’ve been missing.

Arley Sorg is co-Editor-in-Chief of Fantasy Magazine, senior editor at Locus Magazine, and associate editor at both Lightspeed and Nightmare. He reviews books for Locus, Lightspeed, and Cascadia Subduction Zone and is an interviewer for Clarkesworld Magazine. Arley grew up in England, Hawaii, and Colorado, and studied Asian Religions at Pitzer College. He lives in Oakland, and, in non-pandemic times, usually writes in local coffee shops. He is a 2014 Odyssey Writing Workshop graduate.