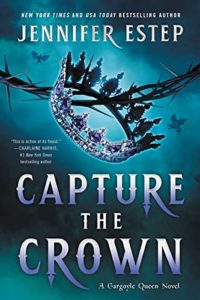 Hello everyone, it’s time for another book review! For this month’s selection, I’m taking a look at Capture the Crown, the first book in a new series by Jennifer Estep in her Crown of Shards universe. It features a fairy tale dress-up princess who also happens to be a pretty competent spy, her hatecrush prince from a rival kingdom, and an entertaining mix of intrigue and pathos.

First off, I haven’t read any of the previous Crown of Shards books (Estep has an earlier trilogy that establishes the universe), but I didn’t feel like I was out of my depth by jumping straight in with Capture the Crown. Prior important events are referred to with plenty of context, and their relation to Gemma, the main character, is removed enough that Capture the Crown feels like the start of its own unique story that just so happens to also take place in this world, which is good. I’m sure those who have read the previous trilogy will find plenty of references and Easter eggs to keep them happy, but Capture the Crown stands perfectly fine on its own.

Speaking of Gemma, the protagonist – while the “pampered princess who is secretly a spy” might be slightly tropey, Estep does an excellent job of infusing her with intelligence and wit, along with her own personal demons she has to constantly battle. Gemma, as a mind-magier (think Professor X but with more gowns), can feel the thoughts and emotions of those around her, as well as telekinetically manipulate various objects, but due to traumatic incidents in her past, her power isn’t always totally under her control. The way Estep writes Gemma’s struggle against herself is very well done, and leads to some well-earned catharsis by the time the final showdown of the book rolls around.

Gemma’s conflicts aren’t just internal, however, as she’s also secretly investigating the theft of valuable minerals from her kingdom of Andvari by the neighboring kingdom of Morta – a despised rival responsible for significant amounts of the pain Gemma has endured. Things get complicated, however, when one of Morta’s two princes, Leonidas, appears in the middle of Gemma’s investigation and dredges up old wounds and fresh troubles. The relationship between Gemma and Leonidas is initially hostile, but as Gemma learns more about Leonidas and Morta, she starts thinking that hate and love might just be two sides of the same coin, and what the heart wants isn’t always what the mind is comfortable with.

I felt that Estep did a very good job of setting up Morta as the antagonists without going full mustache-twirling villain—in keeping with the theme of past traumas influencing current events, we as the reader learn along with Gemma that the villain of your story is the hero of their own, and that kingdoms are made up of complicated people, no matter how much one might want them to be filled with monsters.

This isn’t to say that there aren’t villains to root against in Capture the Crown, as Estep gives us plenty of fiendish plotters and rapacious royalty who would like nothing more than to see Gemma at the bottom of an endless chasm. Navigating their treachery is where Gemma truly proves her abilities as a spy, and while she doesn’t always emerge victorious from all her fights, she uses her head and her heart to make sure what she learns advances her goals.

Overall, Capture the Crown was a fun read with enough depth and intrigue that I always looked forward to what Gemma was going to discover next, but not so much that I felt overwhelmed by dates or names, and while there were a couple of people who I felt had a bit too much plot armor (looking at you, Captain Jerkface of the Royal Jerkface Guards [not his real name]), that just makes the anticipation of them getting their just deserts all the sweeter. If you’re looking for a fantasy novel to flip through at the beach or on vacation this summer, you can’t go wrong with Capture the Crown, and I’ll be looking forward to Gemma’s further adventures.

Read if: You like some romance and royalty in your fantasy; you like alliterative names; you’ve ever wondered what your chances would really be like going against a telekinetic warrior capable of flaying the very skin from your bones.