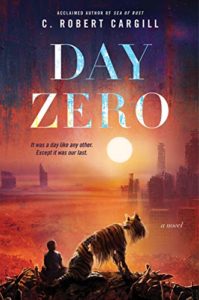 Greetings, bookies, and welcome back to another review! This time I’d like to point your attention towards Day Zero, a stand-alone novel by C. Robert Cargill that tackles weighty topics like the philosophy of self, free-will versus predestination, and just what is that teddy bear doing with a minigun?

Day Zero is told from the point of view of Pounce, an intelligent robot (nannybot in the book’s nomenclature) in the shape of an animatronic tiger who is tasked with caring for Ezra, an eight-year-old boy, who loves Pounce just as fiercely as Pounce loves Ezra. Unfortunately, things quickly go horribly wrong for everyone involved (as naturally happens in books about robots), forcing Pounce to grapple with which of his feelings are really his own and which have been imposed via outside agency, and what that means for his relationship with Ezra. Throw in a chaotic uprising with some good old-fashioned ultra-violence, and Pounce’s quest to find meaning in his life turns into a spell-binding page-turner that is equal parts tough to process as it is to put down.

One of the things I found fascinating about Day Zero is that it is very much an end-of-the-world-robot-uprising-type of book, but one where the lens has been zoomed in extremely tightly on the connections between Pounce and Ezra, which gives it an immediacy that isn’t generally found in that particular style. Large, momentous events are happening out in the world, but they’re always slightly confused and blurry, conveyed via second and thirdhand information, and their relevance is how they peripherally influence Pounce and Ezra’s current ordeal. There is no sweeping, epic quest to reunite civilization in the last utopian enclave, no fancy Macguffin that must be tossed into a volcano after a perilous trek ignoring the fact you could have just flown there instead – instead, Day Zero is about two people surviving the day-to-day chaos of a world that suddenly doesn’t make sense anymore, and what that does to their perception of self.

This leads me to the second thing I really enjoyed about Day Zero, and that is its ability to evoke the sensation of being caught up in events far larger than any one person can hope to control. Cargill’s world mirrors the interdependencies of our own, and the abrupt shift from instant informational access to worrying about what horrors the next house down the street might contain creates an unsettling disorientation that only grows more pronounced the longer it persists. In some ways, Day Zero is also very much a horror story, focusing as it does on the various ways people mistreat each other, intentionally or not, and what that means in a rapidly changing environment where social pretenses are quickly dissolving.

Astute readers may have noticed by this point that I keep using the words “people” and “persons,” when the book is about robots and humans, and this is very much intentional. Cargill does an excellent job of infusing all of his characters, robot and human alike, with personality and pathos in a way that makes the reader care for each and every one of them, even those that we only get to meet for a chapter or two. I do feel I have to give warning that there are more than a few distressing emotional moments in the book, but in each one of them Cargill does an even better job of keeping hope alive in what could have easily turned into a bleak, disaster-porn hate-read.

Overall, the only thing in Day Zero that I could find fault with was that the third act felt a little off in terms of its pacing —a lot happens in a short amount of time, which felt at odds with the careful studiousness of the earlier parts of the book —but on the whole it’s a very minor complaint in a book filled with rousingly successful writing. I was invested in Pounce and Ezra my entire time with them, cheering their victories and groaning at their failures, and Pounce’s journey of self-discovery is very much a human story wrapped in a plushy robot shell. If you’re looking for something to read on the beach this summer that has action and mayhem, but also some existential doubt and emotional heft, you can’t go wrong with Day Zero.

Read if: You like breaking Asimov’s Three Laws; you think Tiggers are wonderful things; seriously, teddy bear with a minigun.