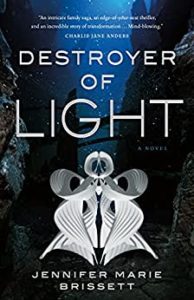 I’ve written book reviews for Lightspeed Magazine since 2017, and with a sad heart, I announce that this will be my last column. I’ve enjoyed my time sharing wonderful books here, and I’m glad to end my time with a doozy of a book, Destroyer of Light by Jenn Marie Brissett. This is a retelling of the Persephone story, but do be warned that it contains abduction and rape.

The story is told through several characters. Cora, a teenage girl with unusually colored eyes, who is kidnapped along with children from her village to be forced into an army. Deidre, Cora’s mother who unsuccessfully tries to get the government to get Cora and the children back. Okoni, a man possessed by fourteen spirits who is attempting to build an army to fight against the krestge, an alien race who nearly wiped out humans. Jown and Pietyr, a pair of unusual twins who are commissioned to find another kidnapped child. And finally, the Lattice, a personified cloud network which only Cora and other people like her can access.

The story skips between Cora in the past, trying to keep her sanity as horrible things are done to herself and her friends, and Cora in the present, a young woman now sent by Okoni to perform a horrific mission. Her story is a very hard read as it deals with the realities of child soldiers, along with Cora being taken by Okoni as his “wife” after he recognizes her strange abilities to access the Lattice. Her story in the present runs parallel to the twins as they conduct their search for the kidnapped child who happens to have the same abilities as Cora. In fact, their stories intersect with Cora’s far more than they know.

We think of heroes as people outside of ourselves who swoop in as saviors, when in reality heroes are powerless people who have gone through so much horror, yet are able to prevent someone else from experiencing the same trauma. Cora goes through so many horrible things that at times, I forgot that this was a retelling of the Persephone story. There are some bits of respite. The scenes with the twins reminded me a little of the detective agency YA novel The Eye, the Ear, and the Arm. We see Cora’s mother never give up her desire to find her daughter, and we get to see Cora wrestle with her programming as she interacts with the krestge.

Like E. Lily Yu’s On Fragile Waves, Destroyer of Light is a hard but necessary read. One that doesn’t promise a happy ending, but it does promise a hopeful one, even if it is bittersweet.