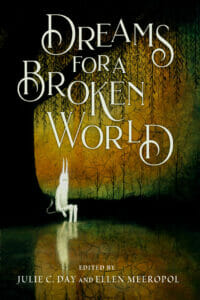 Michael J. DeLuca launched Reckoning Press in 2016, and released Issue #1 of Reckoning Magazine, “creative writing on environmental justice,” in December of that year. DeLuca envisioned a deliberately inclusive journal, and goes into this in the editorial for that first issue: “In these pages you’ll find the people on the front lines: activists, ecopunks, scientists, historians, workers of the land, teachers, students, immigrants, the marginalized, and yes, the privileged. Environmental justice isn’t just for the exploited. Neither is reckoning. For what it’s worth, we’re 66% white, 60% American, 50% male-identifying, 12% Asian, 11% Indigenous, 7% Black. Yes, I counted.” In 2020 Julie C. Day began a new anthology series, starting with her project Weird Dream Society, published by Reckoning Press. While the table of contents does not quite reflect the level of intentional inclusivity of DeLuca’s first editorial, it does list some fantastic writers; and, according to the Reckoning site, all proceeds for that project go to RAICES, a nonprofit that “promotes justice by providing free and low-cost legal services to underserved immigrant children, families, and refugees.”

Dreams for a Broken World is the second anthology in the Dreams series, and the proceeds this time go to Rosenberg Fund for Children, a nonprofit “established to provide for the educational and emotional needs of children whose parents have suffered because of their progressive activities and who, therefore, are no longer able to provide fully for their children.” The foundation is named for Ethel and Julius Rosenberg, whose lives were “thrown into turmoil by the harsh reprisals aimed at those resisting repression.” Guest editor Ellen Meeropol is married to the son of the aforementioned Rosenbergs, and is a founding board member of the Rosenberg Fund for Children.

Where Weird Dream Society set out to “present a more expansive definition of the term ‘Weird fiction,’” Dreams for a Broken World “is about being broken and dreaming change.” The introduction clarifies the mission: “We created this anthology to break down barriers and call for change. As you read this book, we hope you notice the ways in which these stories connect, sometimes directly, sometimes more obliquely, to form an ensemble of voices that are stronger together and reach towards activism, community, and social justice.” I suspect that the editors achieved what they set out to do. Two things I can tell you with confidence: first, this book delivers a more inclusive set of (also fantastic!) writers than the first anthology; and second, there are some truly stunning pieces on offer. I’ll talk briefly about a few of them. But really, you can just stop reading here and make sure to get a copy.

I really loved original short story “Finding Ways” by Zig Zag Claybourne. Benjamin August’s mother has died, been cremated, and been handed over to Benjamin. “His mother fit in a box. A sturdy plastic box. Black. Meant to be dignified. When they gave it to him, he had no idea what to do with it.” This opening demonstrates some of the fine qualities of this piece: a distinctive, light but respectful voice paired with thoughtful cleverness which, all together, delivers a deep, engaging narrative. Claybourne adds a few fresh story ideas, plus interesting characters and situations, and gives us a meditation on being human, and human relationships. It’s a soulful journey through grief, a topic which is heavy by nature, and which is often rendered in extremes. Here it’s carried off with a gentleness which is almost spiritual in itself. Claybourne’s story is unique and wonderful.

Reader, I strongly recommend that any anthology with a Nisi Shawl story be at least considered for purchase, and not overlooked. They recently had original short “I Being Young and Foolish” in one of my favorite anthologies of 2021, Sword Stone Table: Old Legends, New Voices (bit.ly/3wiRq4P). Here Shawl gives us “Fourth and Most Important,” a reprint from 2020 anthology Us in Flux. In the span of a few pages Shawl provides a jaunt into the near future to explore relative advantage and privilege. Willis is more interested in flying his drones than just about anything else. But he starts to get very curious about what Mx. Pickell and their type of rich folk are trading via Pickell’s secret weather balloon network. It’s a fun, brief piece, with delicious layers for those who read a bit more carefully.

“Why Mama Mae Believed in Magic” by Cynthia Robinson Young—originally published in The Halcyone Literary Review in 2020—is immediately raw and powerful. Brutal is probably a better word. The story describes the journey of a young African child who is kidnapped for slavery and brought to a plantation in the U.S. Her identity is somewhat subsumed, as she grows into adulthood, until she meets a more recently enslaved individual named Kossula. The subtext here is about the ways we are bent, until we don’t remember what we were before (with a dash of looking at the ways we are taught to turn on each other). Ultimately, it’s about the importance of uplifting each other, of persistence, of survival; and of doing whatever we can to make sure that we do, in fact, survive.

Breena Clarke’s “The Drill” was first published in 2004 anthology Mending the World: Stories of Family by Contemporary Black Writers. The idea is simple: a mother is waiting for her fourteen-year-old son to return, and it’s his first time coming home at night without his mom. The narrative is effective, smooth, and tense, with glittering truths about the dangers of just being a person—as well as, to some degree, dangers specific to certain people in specific situations. This piece is gripping, relatable, and just really well written.

Sabrina Vourvoulias’ “La Gorda and the City of Silver” (originally published in 2011 anthology Fat Girl in a Strange Land) is so good and enjoyable you’ll be eager to find other stories by the author. A young girl grows up in a family of luchadores, but she is told that girls can’t be luchadors. Still, she designs her own costume and mask in secret. When one of the luchadors proves to be a terrible person, and no one holds him accountable, she dons her outfit and becomes La Gorda—but this is just the beginning! The story sets out with a great voice, visual style, and the occasional pleasantly sarcastic observation. But it’s also just… exciting. By the end of the first section I was actually grinning. On the one hand, it’s about the way people often slide through the reaching fingers of accountability. But it’s also about stepping up, and taking control, even if people seem to think you can’t. It’s even occasionally touching or heartwarming. At face value the premise is a fairly standard vengeance story, but Vourvoulias develops it into something glorious.

Aimee Liu’s “Faith” was originally published in 2004’s Other Voices. As with Young’s story, it takes on a topic which, by its nature, is brutal. The narrative tracks the survival of a young girl who boards a truck in “war-struck Korea,” believing she is one of many who will be given work, but instead ends up in a so-called “comfort station,” enslaved by Japanese soldiers. The entire piece is arresting, perfectly executed, and beautifully written, despite the atrocious content. Sometimes subtle, often sharp subtext on power, gender, and more glows through the text. This piece is not speculative, but it’s absolutely extraordinary.

Dreams for a Broken World collects twenty-four stories, and, as you can see from the sample above, it’s a mix of originals and reprints. Innocent Chizaram Ilo, Benjamin Parzybok, Veronica Schanoes, Charles Payseur, Marie Vibbert, and Robert V.S. Redick have proven their talent and skill across a number of venues, and all have original pieces here. In most cases the reprints do what I personally believe a good anthologist should do when it comes to reprints: bring excellent work to new readers from sources you aren’t likely to have read. Sheree Renée Thomas, Vandana Singh, and Usman T. Malik are among the reprint contributors, and if you know your short fiction this should be a major draw. Whether or not you are interested in where the money goes or the larger mission of Reckoning Press, this anthology offers seriously admirable work. Highly recommended.