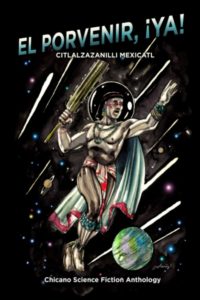 If you are like me, you grew up buying anthologies and devouring them. Collecting them like prizes, each a treasure chest filled with an assortment of jewels. As a young reader, I didn’t exclusively read science fiction and fantasy, but it has always held a special place in my heart. I still have many of the anthologies I bought over the years—some of them have taken up space on my bookshelves for . . . well. Let’s just say a long time.

When I became an “industry professional” by way of landing a day job at Locus Magazine, I began to examine more closely the marginalization of various identity groups within genre. I didn’t really want to believe that certain kinds of people were overlooked; I actually wanted to be wrong. I love genre fiction! And it’s one thing to feel marginalized, to talk about it, to argue with people about it. It’s another thing to find proof, to see that, yes, you are, in fact, not present, you are not represented. The underlying message, the resulting feeling being: you are not wanted.

In seeking proof, I pulled anthologies off my shelves, dug through tables of contents, and started looking up authors on the internet. You don’t need me to give you the numbers; the statistics are not that hard to find. I encourage you to go look for yourselves.

What was a theory I’d developed as a child and teenager became a fact supported by evidence: in the vast and storied literary history of science fiction and fantasy, certain groups of people are either underrepresented or grossly misrepresented; quite often cast as (very bad) stereotypes, or even treated in overtly racist ways.

This is why I entreat you to understand Scott Russell Duncan’s introduction to El Porvenir, ¡Ya!: Citlalzazanilli Mexicatl. Moreover, to try to empathize with him when he says, “The narrator I’d been looking over the shoulder of for the last three books described a boy not unlike myself as a freakish brown and simple ‘other’ and I put down that book forever.” Imagine digging into a series, enjoying the heck out of the ride through two books, and then coming up against a description which draws someone very much like you in seriously unpleasant terms. Duncan goes on: “Through high school I never came across a Mexican American that wasn’t a villain or an extremely minor character in sci-fi novels or movies.” Ernest Hogan, in his preface, echoes the sentiment: “We get treated like aliens (regardless of our legal status) even if we were born in the U.S.A., or should I say EE. UU.? And what can be more sci-fi than to be an alien? To have alienness thrust upon you?” Unfortunately, this experience of being mistreated, or of not being mentioned at all, across countless stories, lines up with the experiences of many readers of color who otherwise love genre fiction.

What I appreciate deeply about both Duncan’s introduction and Hogan’s preface is that they lead up to a sense of welcoming. The idea here is less “we’re writing this for us and don’t really care what you think” and more “we’re writing this for us, and we hope you see us, we hope you love these works as much as we do.” Duncan says, “Make friends with us now! And don’t throw a friendly sheet over the horrors our antepasados lived. It ruins the story, denies our experience and goes against intuition and reason.” And Hogan says: “So read, enjoy, and witness the birth of our futures.”

I couldn’t agree more. Editors Duncan, Irizary, and Rendón have put together an important volume. El Porvenir, ¡Ya! is described as a specifically Chicano science fiction anthology, and it’s filled with stories that demonstrate a range of perspectives and styles. There are a number of fantastic pieces to explore, as well as remarkable art, and section introductions which give important context to the fiction. I’ll talk about a few of the stories and let you discover the rest for yourself.

“Lupe and Her Time Machine” by Rios de la Luz is a really cool story about a grandmother who has assembled a time machine in her garage. There’s something subtly beautiful about the prose, the phrases, the choices. There’s also a beauty in the juxtaposition of the fantastic with the mundane. The moments and images sometimes seem random, and yet they are striking enough to work; and there is an underlying sensibility drawing everything into its own kind of cohesion. The mechanics of the time machine itself are not the point of the story: the machine is a vehicle for the grandmother to revisit important moments of her past. While some readers may be tempted to think of A Christmas Carol in broad strokes, the narrative here is more grounded and relatable, and consequently lands in a place which is perhaps more relevant, more personal. The importance of family and the value of looking clearly at your history, even if painful or uncomfortable, are the central ideas. It’s about connecting with the present through the past, and the power of small but powerful gestures. Unlike A Christmas Carol, rather than miraculous transformation, there is an implication of process, of growth and caring as things one continues to do.

“Oscar and Natalia and Oscar” is an excerpt from Kathleen Alcalá’s Los Voladores. I usually skip excerpts in anthologies, and personally, I am not a fan of excerpts in general, although many people love them! I’m glad I read this one. It’s an entertaining, self-contained story in its own right. Oscar and Natalia are a couple who live with a cat—also named Oscar. The three of them wake up to an apocalypse wherein electronic devices no longer function. The casual, almost conversational style Alcalá employs creates an odd, fairly light narrative, which is then dappled with gentle, brief observations. Underscoring everything is a prismatic examination of the various ways individuals relate to each other, as seen through the experiences of the central characters. The piece feels very connected to oral tradition, in the sense of easy movement between the real and the fantastic, and overall flow of story. Some of the subtext suggests that if you are too rigid and unrelenting in your approach to life, you will struggle; but if you are adaptable, if you can go with the flow, you will thrive. The same can be said of reading this story. Read it with an open mind, an open heart, and pay attention to the details, and the read will be fun, entertaining, and enriching. I really enjoyed it!

“The Navel of the Aztec Moon” by Rosa Martha Villareal, this one . . . well, it didn’t quite land for me. But it’s one of those situations where I am confident that this is a question of personal taste, and that there will be many readers who rather like it. Natasha is a new physics professor and hears of an unusual research grant put up by a notable historian. She meets up with the benefactor and discovers that both he and his household are a bit mysterious. More importantly, he is obsessed with time travel. Where the story leads may not be where you expect! The style and structure, by my read, will appeal to fans of classic SF and literature; it’s really an idea-driven piece. There’s also some juicy subtext around identity. I’ll note that there are elements I am likely missing; in fact, the inscription at the beginning reads “for Armando Rendón” so I suspect there are even more layers of conversation to be enjoyed by savvy readers.

Lizz Huerta’s “Lorenzo and the Rooster” was really intriguing. The style is more along the lines of fable or myth. This one tells of cursed lovers whose reincarnations sprawl through centuries, always comprised of near misses and odd pairings. The joy of the piece, and the freshness, is largely in the ideas, the delightfully strange situations, and some of the wonderful imagery. I’m not sure what the underlying messages are. It could be “don’t fuck with death;” narratives about scorned gods are a genre favorite, and this one delivers. It could also be an expression of existential angst, each iteration a reflection of the enormously messed up situations we face in our actual lives: coronavirus, hateful politics, greed, violence, and more. In other words, wave after wave of circumstances which conspire to keep happiness just out of reach. Then again, it could just be a damn fun story. Whatever the intentions, it’s a great read!

The publisher’s website says that this anthology is the first of its kind, “written solely by Mexican Americans.” It’s staggering to think that it took so long to see a book like this, and that—as with some of the other anthologies I’ve covered for Lightspeed—it took a group of determined individuals to put it together and share it with the world, rather than happening via a major publisher and being driven by the power of an expensive international marketing campaign. Similar to recent kindred anthologies (Grace L. Dillon’s Walking the Clouds comes to mind, the first ever speculative fiction anthology with stories entirely by Indigenous authors, published in 2012) this book is just too easy to overlook. I encourage you to spend some money, to add this anthology to your collection, and to dive into these worlds. It’s time and money well spent.