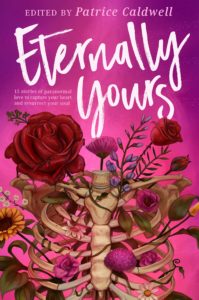 Back in 2020, Patrice Caldwell gave us original anthology A Phoenix First Must Burn (reviewed by me here: bit.ly/3egqf5h). Similar to anthologies like 2015’s Octavia’s Brood, 2017’s Sycorax’s Daughters, 2019’s New Suns—and of course before these, Dark Matter by Sheree Renée Thomas in 2000—Phoenix stepped up to fill a need, to showcase authors and stories that were largely missing or overlooked by most genre publishers (not to mention review venues). Phoenix felt like important, groundbreaking work.

Now Caldwell has put together original anthology Eternally Yours, a “paranormal romance anthology filled with tales of the mortal and the monstrous.” It’s a good book, but it doesn’t feel “groundbreaking” the way Phoenix did. This isn’t necessarily the fault of the book; in fact, it’s kind of a wonderful thing.

There have been a number of very recent, very worthy efforts, such as El Porvenir, ¡Ya!: Citlalzazanilli Mexicatl; Disruption; and Unlimited Futures: books which seek to bring marginalized voices out of the margins and into your to-be-read lists. As with the majority of earlier entries, these books are often by smaller presses, or presses with limited reach in mainstream markets. But there have also been anthologies such as Our Shadows Have Claws: 15 Latin American Monster Stories, published by Algonquin; Reclaim the Stars, published by St. Martin’s imprint Wednesday books; and Sword Stone Table: Old Legends, New Voices, published by Penguin Random House imprint Vintage. In other words, books produced by companies with considerable reach. Even shortly after Phoenix, Dhonielle Clayton came out with A Universe of Wishes with Penguin Random House imprint Crown. Make no mistake: you can still pick up a bunch of random new anthologies by major publishers, flip through their pages, and find very few marginalized voices; some will even be stocked exclusively with white authors, from beginning to end. That said, even over two years, significantly more books have come out featuring those previously missing and overlooked demographics. Bottom line? Even though it’s easier to find these books than it was two years ago, the work is far from done. This is why Eternally Yours is still an important book, even if it may not feel as groundbreaking as Phoenix was.

There is another big difference between this book and Phoenix. With Phoenix, it felt like Caldwell was taking bigger risks, partially in terms of the stories themselves and how daring they went, but also in terms of the authors. Phoenix featured a handful of notable authors, and while all the authors in that book had proven their skills somewhere in publishing, probably half or more of those authors would be new to the average genre reader. By contrast, Eternally Yours is seriously stuffed with bestselling authors. The average reader, I think, will at least recognize most of the names in this anthology. New York Times-bestselling author Kendare Blake, for example, or internationally bestselling author Kat Cho, or New York Times-, USA Today-, and Los Angeles Times-bestselling author Melissa De La Cruz. In a sense, Caldwell has put together the Avengers of marginalized voices, pulled specifically from the pool of today’s young adult heavy hitters. Of course, seeing Anna-Marie McLemore included in this table of contents was a big selling point for me, personally: known at this point for their novels, I consider them to be one of the better short fiction writers out there, ever since reading their breathtaking “Cristal y Ceniza” in A Universe of Wishes.

But let’s go back to my earlier statement: It’s a good book.

Because it really is. This book may feel less daring, but there are still some surprises, as well as a few voices that benefit from being showcased next to all these bestsellers. Do not doubt, folks. Everyone here knows how to put together a story. It makes sense because, unlike many of their non-marginalized counterparts, in all likelihood, everyone here had to fight twice as hard and write three times as well to earn those accolades. More importantly, Caldwell knows how to pick authors that will deliver something worth reading.

For example, Chloe Gong’s “A Thousand More” utilizes excellent narrative choices to effectively sketch a scene within just a few lines. Gong brings the moment to life via vibrant characters in relatable moments. Tally is a highly motivated student whose life gets disrupted when a new (very hot) student declares that they are reincarnated lovers. One problem: Tally doesn’t remember it, and she isn’t convinced. It’s a fun story, and it’s interesting to see the fluctuations of a relationship stretched across Chinese history.

“If You Give An Asura a Cookie” by Akshaya Raman kicks off with a good setup: Rupa is a young asura who is unhappy being an asura. This lays the groundwork for a theme that digs into self-acceptance. The story is bolstered by wonderful characters and great familial relationships. A sprinkle of humor uplifts everything, counterbalancing an otherwise painful subject. The meeting of the love interest is super charming, and somehow I really liked that the initial moment of attraction was in their monster forms. Overall, it’s a nicely written story, with a good through-line on finding self-acceptance through discovering kindred spirits. The twist or surprise is pretty obvious, but it’s still an entertaining story, perhaps even moving.

“Kiss the Boy” by Adib Khorram is an updated and gay The Little Mermaid. The writing feels easy, and it pulls you gently into the narrative. The dialog is good, and the awkwardness and nervousness of the main character were palpable. I smiled and laughed and remembered a lot of things from my own experiences. In other words, the piece is extremely relatable, even if it’s pure fantasy. All told, this story is great fun, with a splash of commentary on various issues here and there, and even a cool idea or two thrown in as filigree.

I’m not necessarily the target audience for this book, but I do dabble, and I found it to be a solid offering. Moreover, looking at the industry and where we’re at, I’d consider this book to be an important contribution to culture. Perhaps most importantly, it’s worth your money. Curl up for an evening, give it a read. Let these authors take you on a few fantastic, romantic journeys. You’re in good hands and wonderful imaginations.