Book Review: Far From the Light of Heaven, by Tade Thompson 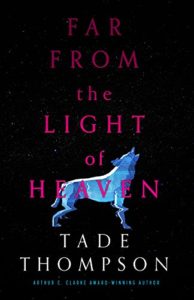 After traveling ten years in sleep pods, Michelle Champion (Shell for short), the captain of a colony ship, Ragtime, wakes up to the brutal murder of several sleepers. An investigation begins to figure out who killed the passengers aboard the colony ship. As the mystery unravels, Shell and Rasheed Fin, the investigator sent to solve the murders, end up in the crosshairs of the killer, putting everyone on board and below on the colony planet at risk.

Far From the Light of Heaven blends horror, mystery, and science fiction to weave an exciting and, for the most part, well-paced story. From the first page, Shell’s voice and the narrative flow of the story grabbed me. I didn’t care too much where I was going, but I loved all the science and space worldbuilding that Thompson weaved in to solidify the science fictional aspects of the story. In fact, Thompson did it so well that when the horror of the murders was finally shown, it took me by surprise and pushed me further into the story and mystery.

Sometimes when authors throw a bunch of genres into a novel, each one takes away from the other, and they don’t mix well. Far From the Light of Heaven was not one of those books. It was clear through the writing that Thompson put effort and research into making sure each genre felt naturally connected to the story. And that’s all I want as a reader: some connection between the story and the elements the author uses to tell it.

While the language was very point blank and simple, Thompson’s writing and structuring of the novel reminded me of page-turning commercial thrillers. Nothing beautiful or showy, but nothing terrible either, all easing you into a sort of comfort and relaxation. That makes for the moments when the prose picks up and becomes poetic to stand out.

During the middle of the book, when the POV started switching back and forth between Shell and Fin, I got lost in whose head I was in because their personalities are so similar. And when I got lost, I got bored. Which didn’t jibe well with the moments where the writing got dry, or the flashbacks began taking up a lot of the story. But those less interesting moments didn’t last long as the narrative, mystery, and character cast began to expand, showing aspects of the world and story new to me. The action sequences also mixed in well with the literary and narrative storytelling.

When the mystery was finally unraveled, it was done from the point of view of the killer. Though it was interesting to see the full story behind the mystery, it took away from the suspense building in me and felt too spoon-fed. Instead of actually solving the mystery along with the characters—who also didn’t solve the mystery and were instead given the answer—I was shown exactly what happened and why. But in the end, I think, what made the whole reveal feel jarring was the introduction of new characters and POVs to help neatly unravel and solve the mystery.

After all the unraveling is done and the reader is put back in the action of the main story, things start to pick back up, and the pacing becomes tight again. There are a lot of beautifully sad moments in the end, too, that Thompson writes in an easily digestible and emotive style. Even though the mystery of who killed the passengers is solved right on the page, there is a deeper mystery and story even beneath that, fueling the remainder of the novel.

For readers who enjoy semi-neat bows wrapped around their plots and stories, Far From the Light of Heaven is an excellent read with many genres seamlessly mixed to create an intriguing locked-room mystery in space.