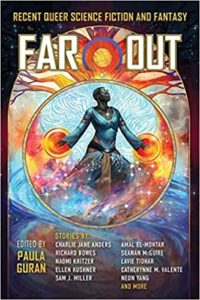 One of my favorite things about anthologies is discovering new and upcoming authors; or, being introduced to authors I didn’t really know about before. There are a number of recent books which do this well, such as Glitter + Ashes, edited by dave ring (bit.ly/3uL7o4D). Many anthologies, however, don’t necessarily aim to bring newer voices to the fore.

Paula Guran’s latest anthology, Far Out: Recent Queer Science Fiction and Fantasy, falls into the latter category. Folks who read a fair amount of genre short fiction will be familiar with the authors in this book. In fact, to some degree, the table of contents reads like the glitterati of queer fiction. Nalo Hopkinson was recently named a Grand Master by the Science Fiction and Fantasy Writers of America. Seanan McGuire publishes so much that she has to use multiple pen names. (Kidding—kind of. Mainly in that she doesn’t have to; people would publish her work even if she didn’t use pen names.) Sam J. Miller is probably the most well-known openly gay author here, with award wins and nominations to his name, as well as popular books out in both adult and young adult markets, published by major houses. Even the authors with whom some readers may be less familiar are seen as notable within genre circles. This isn’t a book of newbies or of authors just breaking in; this is a gathering of pros. And they’re all decked out, hanging out in the ballroom together.

Far Out is a reprint anthology with twenty-four stories on the menu. While the line-up of authors might not be surprising, what is a bit more interesting is the sources of some of the stories. Most readers probably know of multi-award-winning author Charlie Jane Anders, for example, but they may not have read “Don’t Press Charges and I Won’t Sue” from 2017 anthology Global Dystopias. Award winning author Ellen Kushner made her mark with debut novel Swordspoint, and has remained a genre favorite ever since, but fans may have missed “The Duke of Riverside” in 2011 anthology Naked City. Darcie Little Badger’s “Né łe” is pulled from 2016 anthology Love Beyond Body, Space and time: An Indigenous LGBT and Two-Spirit Sice-Fi Anthology, and aforementioned legend Nalo Hopkinson’s “Ours is the Prettiest” is pulled from 2011 anthology Welcome to Bordertown. Some of the expected sources are here, of course: Lightspeed Magazine, Strange Horizons, and so on. And some picks are, in a way, what we might think of as cheap shots: “Cat Pictures Please” by Naomi Kritzer won a Locus award and a Hugo award, was nominated for a Nebula Award, was the title story for Kritzer’s collection, and ended up inspiring a novel—yeah, people probably know about this one (plus, it’s free to read at Clarkesworld, where it was originally published!) But, ultimately, Guran has done something else which I love to see anthologies do: she has flexed her prodigious genre knowledge to curate a batch of stories which, in many cases, readers might have missed, and might otherwise not know about. A number of the pieces are from popular online magazines, and anyone can look them up; but she’s also tapped places like Expanded Horizons, which perhaps deserves more attention as a venue; as well as print magazines, the contents of which only their subscribers will have read. In this way, Guran performs a service I believe anthologists should, and she does it with grace and style. She’s telling readers, sure, you might know who these folks are, but did you read this.

Believe me, dear readers, the stories here are well worth your time.

Sticking with my “glitterati at the ball” metaphor: you could throw a glass slipper at this table of contents and any story you hit is going to be good. Frankly, some of these pieces don’t really need my help. They don’t need me to tell readers about them; they are already quite well regarded. Kritzer’s aforementioned story is a stand-out example. Tamsyn Muir’s “The Deepwater Bride” can be included in this list, as a finalist for Nebula, World Fantasy, Eugie, and Shirley Jackson awards. “Seasons of Glass and Iron” by Amal El-Mohtar was a finalist for more awards than you can count on one hand, and won Hugo, Nebula, and Locus awards. But there are a few stories I’ll highlight, because readers may have missed them, and they really excited me.

Nino Cipri’s “The Shape of My Name” is a cool, underrated story with an interesting structure. It’s a time-travel tale, and it’s disorienting at first. But really, it’s about a boy’s attempt to come to terms with a mother who wanted to keep the boy from transitioning. Heartfelt, captivating, and very effective.

Caitlín R. Kiernan’s “The Sea Troll’s Daughter” is a story I love so much that I’ve read it at least twice before, but felt it deserved a reread. This is the type of tale so many fantasy authors attempt: “old-timey” language which is actually effective and beautiful, a narrative which surprises at each scene but still feels organic, and moments of humor which entertain but don’t belabor their punchlines. So much is remarkable about this story, beyond the basic value of entertainment. Who the protagonist is subtly shifts. The tale feels like an adventure, but almost everything happens in one place. It feels like it’s sweepingly heroic, yet the “hero” is a drunkard and in the course of the primary narrative doesn’t actually accomplish much. In other words, it’s taking the expectations of heroic sword and sorcery and upending them, and it’s doing it in such a slick, engaging way that readers don’t even notice. There’s this layer going on of commentary regarding truth, perspective, and narratives, which is also meta, but without waving a flag and shouting about being meta. Brilliant.

A.C. Wise, for me, has become one of those authors I find in anthologies quite often, and in cases where it’s an anthology I’m reviewing, inevitably has a story which I feel is worth noting. “And If the Body Were Not the Soul” opens with quiet tension and suspense. Ro is a bicycle courier who doesn’t like to be touched, and Xal is an alien who, like all the recently arrived aliens, is confined to a specific neighborhood. Both characters are thoughtfully portrayed, and their situations cleverly describe degrees and variations on both otherness and othering. When Xal brushes Ro’s hand, the impact is complex with a dash of existential. Prejudice and blame are explored, growth, change, isolation, and human interaction, all through a narrative which has a brilliant intensity. There is, importantly, this very relatable sense of exploring something unfamiliar but intimate, and it feels scary in the most honest of ways.

We need to talk about Tristan Alice Nieto’s “Imago.” This is one of the most deliciously macabre pieces I’ve read in a long time. It’s both completely absorbing and super creative. On the one hand, it’s a treatise on the nature of life, a discussion of relationships, and especially our relationship with identity and memory. It’s about what we meant to each other. But, strictly from a craft perspective, it’s a stunning example of the way a skilled writer can absolutely floor you with a narrative which has very little “plot” or “action.” A good third of it is primarily introspection, where, really, pretty much nothing happens. And yet it is absolutely engrossing.

So, why is it important to have a queer book?

Nino Cipri’s story comes to mind. I read reviews of this story by two notable reviewers and they both seem to be oblivious to what the heart of the story is. For some of us, it’s right there in the title: “The Shape of My Name.” Most queer people will get a signal from this group of words, one which non-queer people are likely to miss. And sure, the reviews talk about other stuff. Just not, you know, the most important stuff.

The fact is, many people who aren’t queer just won’t get the concerns of queer people. If you explain it, they still might not get it. If they get it, they might not understand why it’s important, why it matters. Many queer kids still grow up in isolation, surrounded by people who mean them harm, and without access to basic conversations or ideas which can help them navigate their own feelings. Besides all this, hate is still a thing: in the US we see legislation trying to limit or delete the rights of queer people, hate crimes are a constant possibility, and what’s really messed up? Relatively speaking, we are the lucky ones, since plenty of countries imprison or murder queer people.

But you know what? You don’t need to be queer to enjoy these stories. I told you that you could throw a glass slipper at anything in this book and you’d hit a good story. It’s fine if you don’t have a glass slipper. Use a boot, or a loafer; throw a flip-flop. This book could just as easily be a “Best Of.” If you’re not queer, maybe you won’t get some story elements or nuance, but you’ll still be in for a damn good ride.

So go ahead, let Paula Guran show you around. Let her take you Far Out.