Book Review: For the Wolf, by Hannah Whitten 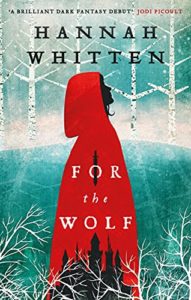 I’ve been on a real romance kick as of late. Maybe it’s because I’ve been craving more stories where people don’t like each other at first, but then feelings start to emerge and suddenly they can’t look at each other without their hearts pounding and their mouths going dry. Or maybe it’s because I’ve been reading fanfic through the Archive of our Own website, where the stories there tagged with intriguing names such as slow burn, fluff, and hurt/comfort.

Those tags perfectly describe Hannah Whitten’s book For the Wolf, which has loose echoes of fairy tales—Red Riding Hood and Beauty and the Beast in particular—where a girl goes into the woods to stay with a dangerous beast and ends up falling in love with him. However, this story also mixes in gothic elements that drew my attention. Arms marked by magic. White-robed priestesses walking in the dark. So much blood used as payment. Whispers of dark dimensions with horrific beasts slavering to break from their prison and take over the world.

My kind of story.

Red is a second-born daughter. Her twin sister Neve had been born first, so she is destined to take her mother’s throne. But Red, according to tradition, is destined for the Wilderwood, an enchanted forest north of their kingdom, as a sacrifice. Before Red, three other Second Daughters had been offered to the forest, and none of them returned. Legend has it that they were killed by the Wolf, a beast who demands the sacrifice to keep monsters from the Shadowlands from spilling out of the wood and destroying the kingdom.

Unable to change her fate, Red goes into the forest. To her surprise, instead of death, she meets the Wolf, a human who goes by the name of Eammon, the son of the original Wolf who went into the forest 300 centuries ago. Red quickly learns that Eammon’s true purpose is to act as Warden for the Sentinels: white, smooth-barked trees who act as barriers against the Shadowlands. Eammon is gruff, but under his surly exterior is a guy who is still dealing with the death of his parents, and who is giving too much of himself to protect the Wilderwood. The trees work by drawing on Eammon’s magic and blood, but one man isn’t enough. Hence the trees have chosen Red, wishing to drain her of her blood and the seed of magic that is sleeping inside her.

Whitten does an excellent job of making the Wilderwood gorgeous and creepy in turns. Red quickly learns that all she has learned about the forest and its dreadful guardian is false, particularly when she also meets Fife and Lyra, who have made their own blood bargains with Wilderwood and fight alongside Eammon to protect the forest.

Meanwhile Neve, left with the guilt of her sister being sacrificed to Wilderwood, finds herself drawn to a priestess named Kiri who claims she can bring Red back, but through rites that are clearly heretical to what Neve has been brought up to believe. I did like how Whitten shows how fine the line could be between breaking traditions that need to be broken versus going too far in the push to do so.

But at the heart of this is still a romance, which I enjoyed. The romantic tension between Eammon and Red built up well. Also, Eammon blushes. I do have a weakness for gruff, surly guys who get flustered enough to blush.