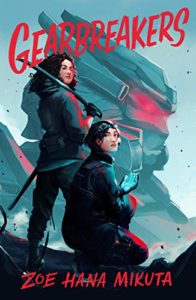 A world ripped apart by war, giant mechanized fighter bots, and oppression that runs so deep it’s literally threaded through some of the citizens isn’t the most likely place to find love and deep friendships. But that’s exactly what the main characters of Gearbreakers, Eris and Sona, do as they carve out a path of resistance.

One of the first aspects of Gearbreakers that grabbed my attention was the relationship between Eris and Sona. Eris was raised as a Gearbreaker, a resistance fighter who braves direct combat with the giant fighter bots known as Windups. She hates everything Godolia, their world, stands for and risks her life protecting the innocent workers under the thumb of Godolia’s tyrannical rulers. Her whole life has been fighting people like Sona.

Sona is a Windup pilot. She’s trained most of her life to do the dirty murderous work of Godolia. In her service to Godolia, Sona has even had the operation removing her eyes and imprinting her with the cold intentions of the empire. She’s meant to kill people like Eris. But instead of killing each other, Sona and Eris work together. Because Sona isn’t exactly what she seems.

Their relationship is not only soaked in tension but there’s also a nice softness clinging to the two young women, keeping all the battles, war, and torture in perspective. Elis, Sona, and every other Gearbreaker fights for their home and the other citizens in Godolia. Throughout the novel, the point of views shifts back and forth between Sona and Eris, keeping a tight and churning pace throughout the whole book. Nothing feels too fast or too slow. Except for the romantic build. It’s pulled so taut that it left me squirming for Sona and Eris’ building love and the inevitable light and darkness it brings the two women.

With the themes of battling for change, forced servitude, and oppression, it might appear like Gearbreakers is a dark story. There is a rage and vengeance with palatable anger on the pages, but there’s also a lot of heart and tenderness. Not just between Sona and Eris, but the people they call family and comrades. Alongside the sweet and heartwarming relationships in Gearbreakers, there’s a fair amount of ruthless and bloody action.

Gearbreakers sometimes feels like non-stop go-go. A story of constant movement and action, but that’s what works for the story. Mikuta balances the building love, murderous empire, tender relationships, savage mechanized killers, and a community of fighters in a way that the action works on multiple levels. It never feels draining or too much, always just right, and a tad bit agonizing.