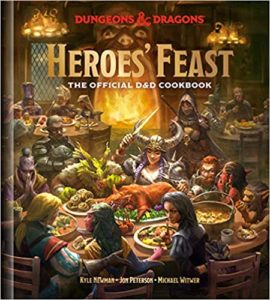 Salutations, readers! This month I’d like to tell you about a book that doesn’t so much tell you a story as one that allows you to create your own, and that is Heroes’ Feast, the official D&D cookbook by Wizards of the Coast. Fortunately for the non-Dungeons and Dragons fans out there, being a role-playing enthusiast isn’t required to appreciate the recipes in this book; it works perfectly fine as an assorted collection of various soups, appetizers, main courses, desserts, and libations for any household.

The first thing that impressed me about Heroes’ Feast was the production quality of the book itself. The hardback is filled with page after glossy page of full-color photos that are just as much a feast for the eyes as the food they capture, and almost every dish has an accompanying picture of the finished product (impossibly stylized, as anyone who’s spent even a second on social media knows all food pictures are). There are also multiple full-page art pieces that look as if they came straight from a player’s handbook to introduce each new chapter, which are broken up into various D&D cultures (human, elf, dwarf, halfling, and uncommon cuisine).

Speaking of the cuisine, while the recipes have obviously D&D-inspired names (Arkhan the Cruel’s Flame-Roasted Halfling Chili!), the dishes themselves are a fairly broad spread of recognizable western European/American cooking, ranging from the simple (basic tempura, various breads, a starter salad) to the complex (bouillabaisse and an entire roast turkey with stuffing and gravy are among the more notable ones), but all are presented in an efficient manner that lays out the ingredients and cooking instructions in an easy, step-by-step fashion that requires only the most minimal of cooking skills. Basically, as long as you don’t roll natural ones on a consistent basis in the kitchen, you can make anything in this book.

As a regular at-home cook, one of the things I really appreciated in Heroes’ Feast was that the ingredients themselves were not ridiculously obscure/specialized, and they also overlap between quite a few different recipes (there’s nothing worse than a recipe that calls for half an ounce of fresh unicorn horn and you know you’re never going to use it in anything else until it rots away in your pantry). Ninety-nine percent of what you’ll need for any of the recipes is likely available at your local supermarket, and any leftovers can be repurposed into another dish for another day, whether it’s mythical or mundane.

I think my only quibble with Heroes’ Feast is that it felt a little too focused on western European/American dishes—sure, there are a couple outliers such as hummus, kebabs, and a stir fry—but for the most part it keeps the Eurocentric palate that flavors a lot of older D&D editions, which is a shame because the current D&D universe is as varied as the people who play it. That being said, a cookbook, unlike a dungeon master’s manual, is only a series of guidelines, not hard and fast rules that must be followed no matter what, so hopefully Heroes’ Feast can serve as a springboard for readers eager to explore other exciting cuisines. (I’ll also note real quick that while there are several vegetarian recipes, most of the book is decidedly meat-based when it comes to protein).

Overall, if you’re looking for a way to spice up game night, searching for new techniques to hone your chef’s knife +1, or even if you’ve never cooked before and want something to help you take the plunge, you can’t go wrong with Heroes’ Feast. Just make sure you source your halflings ethically and sustainably.

Read if: You like the Joy of Cooking (basilisks); you think your DM might be susceptible to food-based bribery; you always wondered what those Dragonlance potatoes would taste like.