Book Review: How High We Go in The Dark, by Sequoia Nagamatsu 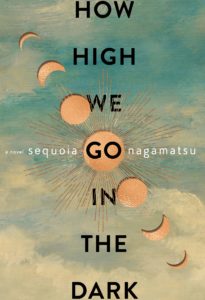 Hello everyone, hope your summer vacation was excellent, and welcome back to another book review. This month’s offering is How High We Go in The Dark, by Sequoia Nagamatsu, which is a collection of short story vignettes woven into a broader dynamic whole—a tapestry of lives covering decades and centuries, their threads converging and separating along the way.

Before I get into the structure of the story, I have to offer fair warning—How High We Go in The Dark is an emotionally heavy read. Nearly every chapter deals with loss or trauma of some sort, and while handled quite skillfully in Nagamatsu’s capable prose, there is a definite undercurrent of pain wending its way through the book. Fortunately, there is an even broader current of hope and optimism overlaying that pain, so just be aware that this book might kick you in the feels more than once as you make your way through it.

Now that that’s out of the way, let’s talk about what’s actually going on in the book!

The novel’s first story takes place on a very recognizable Earth, one set in the not-too-distant future, and sets the stage for the subsequent, loosely related chapters. The world is warming, the weather is changing, and things frozen for thousands of years are starting to re-emerge into the light, including a virus that drastically alters how humanity interacts with itself and the world.

(In fairness to Nagamatsu, he’s been working on the book for over ten years, so it’s not specifically a current-event Covid pandemic story, and actually underscores how much thought went into the setting, as scientists have been warning of the increased possibility for pandemics in a warming climate for decades—particularly those from the Siberian and Antarctic permafrost layers.)

The chapter ends, as most do, with intermingled notes of pain, regret, optimism, and a sense of the impermanence of life, but one that understands life is made up of how we connect to those around us. This is a common theme throughout the book, the sense that we all die in the end but it’s the manner in which you get there that matters as well as who you touched along the way, which Nagamatsu does an expert job of illustrating without becoming repetitive.

In terms of the overall story, while reading How High We Go in The Dark, I felt like I was getting snapshots into the most important days of a person’s life, inflection points where vital connections were lost or made, a feeling reinforced by Nagamatsu’s choice to use first person perspective in each entry. It’s slightly disorienting at first, due to how loosely bound the individual chapters are, but it quickly becomes second nature to start a new chapter and jump into that person’s mind (in a slightly meta twist, one of the chapters actually features a version of this happening to the characters involved, along with a wonderfully optimistic culmination of community).

One of the things I really enjoyed about How High We Go in The Dark was the constant evolution of the world throughout the chapters, as generations who weren’t even alive when the choices were made that would shape their future have to find their way as best they can in an increasingly hostile planet. It’s very clear that Nagamatsu put plenty of time and study into the effects of climate change and how humans might adapt to the new world it will create, and then extrapolated from there. But what really got me was how he expressed this evolution—it’s always as a backdrop to the story, a natural part of the world that the characters live in, accepted because they are not titans of industry or political masters, but simply people trying to survive and grab some happiness amidst the sorrow.

Overall, if I can leave you with anything, it’s that this is a book that is innately, essentially human in a way few writers manage to capture. It is the humanity of a father trying to understand his daughter, of a brother trying to understand his mother, of families cracked and barely held together wondering if they’ll shatter, and strangers grasping blindly towards each other for the faintest thread of connection. It is the sense of straining and yearning in their struggles to relate to each other and overcome the pain the world so easily inflicts that is equal parts heartbreaking and heartwarming; the tiny, constant battles waged millions of times every day across our planet in countless different ways as we seek to understand another person’s point of view. Above all, it is a book that understands the importance of saying the things you wish said and doing the things you wish done before that other point of view disappears, because once it does, it never comes back.

Read if: You’re interested in flawed people; you appreciate a good Babe reference; you’ve ever felt that despite your best efforts your parents still weren’t satisfied.