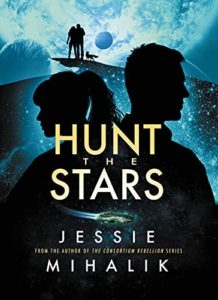 reetings, readers, and welcome back to the reviews! In this month’s review I’ll be going over Hunt the Stars, a new science fiction novel from Jessie Mihalik (who also wrote the excellent Consortium Rebellion trilogy).

Much like Mihalik’s previous works, Hunt the Stars is a solid mixture of science fiction, romance, and space opera, featuring a confident female lead who may not always have all the answers, but generally knows where to go looking. It also includes a strong found-family sub-theme, plenty of gripping action scenes, a slightly telepathic cat-fox thing (because who doesn’t like floofy animals), and a steamy shower sequence that might leave you hot and bothered.

The book opens with Octavia Zarola, the protagonist in question, a former war hero turned bounty hunter who has been approached with the offer of a lifetime—track down a missing object for enough money to solve all her and her ship’s woes. The only catch is that the person offering is a member of the Valoff race, a group of telepathic almost-humans that Zarola spent her military career fighting to the death, and old scars still linger on both her body and mind (as well as her crew’s). To make it worse, the man offering, General Torran Fletcher, may not be quite the monster that Octavia thinks.

Much like her previous books, Mihalik does an excellent job of letting her characters grow and expand into the spaces she creates for them, and while the enemies-to-lovers trope is not a new one, it is executed well and with plenty of layers that keep the journey believable. Octavia and Torran’s relationship has plenty of twists and turns, and hums along quite nicely next to the bounty hunter mission both are pursuing. In addition, while Octavia and Torran’s crew aren’t centerpieces like their leaders, neither are they mere window dressing. I felt myself caring for each one as the book went on and the group grew closer together, and they all stood out in their own unique way.

One thing I like about Mihalik’s writing is that while Hunt the Stars is definitely an SF space opera world with plasma swords, telekinetic abilities, fancy combat armor and spaceships, all the gadgets and gizmos take second place to the people who use them. The focus is always on the characters and their relationships to each other instead of the minutiae of the tech (not that I mind a good geek-out numbers book), and the universe she creates feels both believable and complex without getting bogged down with extraneous detail. The pacing of the action scenes flows nicely as well, but again, the attention remains more on the characters instead of the combat.

The other thing I particularly enjoyed about Hunt the Stars is that Mihalik also does a great job of weaving a fairly complicated political/intrigue web around the crew’s mission while making it feel like an organic progression of events. The motives of the various factions are cloudy enough to be intriguing but not so much as to be impenetrable, and by the end of the book I felt like a resolution had been reached, only it was merely the first step onto a larger stage, one which I’m quite excited to see what Mihalik does with for subsequent entries.

Ultimately, Hunt the Stars is a flavorful book without being overly dense, and manages to delicately balance both light-hearted fun with serious emotional moments in a way that (while it might sound trite) left me feeling quite happy after I finished it. Not every journey has to be grimdark and ravaged, and I heartily recommend Mihalik’s latest entry to anyone who wants some good old-fashioned space adventure with characters you can grow to care about. I am definitely looking forward to more entries in this series, and hope that they come soon.

Read if: You want to reluctantly fall in love with buff Professor X; you feel like every character needs to be shipped; you need the floof.