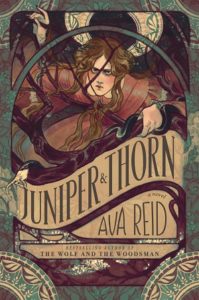 Salutations, readers, and welcome to another book review! This month we’ll be leaving the warm rays of summer behind to spend some time in Ava Reid’s lushly oppressive Juniper & Thorn, a gothic horror based loosely on one of the original Grimm fairytales (The Juniper Tree).

Right from the get go, with protagonist Marlinchen Vashchenko talking about the monster under her bed and how it’s the most easily sated creature in the house, Juniper & Thorn makes it very clear to the reader what kind of fairytale it’s going to be, and it’s definitely not a sanitized Disney version filled with dance numbers and smiling animal companions. No, Juniper & Thorn is very much an old school fable, unafraid of the gristle and guts of true knowledge, where blood and pain are on full display for all to see, and if there is a happy ending with lessons learned (not always guaranteed in these types of stories!) they are scars wrestled out of a determination to persevere in the face of a harsh and unrelenting world.

Marlinchen’s story follows many of the traditional fairytale beats—overworked third sister; trapped in a strange and mysterious castle; deranged wizard holding the princess captive; sneaking out and encountering Prince Charming—but Reid does such a masterful job of undermining the familiar tropes with a sense of raw humanity that even when you think you know how the story should end, you can’t look away from how it’s going to get there. More importantly, at least in my mind, is that I couldn’t look away from the slow unfolding of the characters, the way Reid gracefully peels back layers of personality and trauma to get at the beating, bloody heart beneath—the pain they cause each other, the pain they cause themselves, and how much of it all is caused by love grown twisted and wrong.

At this point I feel I have to mention that there is a lot of trauma in this book, ranging from self-harm to emotional abuse to sexual abuse to physical abuse, and though it is never presented in a way that feels voyeuristic or for cheap thrills, it hits all the harder for its mundanity. “Look,” Reid whispers in your ear, “this is what a real monster looks like, the one living in your house out in the open, so banal that you could be excused for overlooking it,” so be forewarned if you have any triggers around those issues. That being said, one of the hallmarks of really good horror is that slow, creeping realization that things are so much worse than you thought, and Reid nails that aspect beautifully, so if you can handle it, give the book a shot.

I think the biggest thing that really stood out to me in Juniper & Thorn, and what makes the whole book work, is Reid’s command of language. It’s often said that a picture is worth a thousand words, but Reid’s writing also proves the inverse true—a thousand words can paint a picture of such richly illustrated complexity that you just want to sit and admire it for a while, examine all the angles and small details tucked away into the corners, because it’s almost too much to take in at once. The Vashchenko house is as much a character as the family that resides within, as is the town of Oblya in which it squats; one last remnant of the Old World in a city where the new magic of modernity and capitalism have spread its roots; all of it brought to rich, grimy life by Reid’s not-quite-floridly-descriptive style. The world of Juniper & Thorn jumps out at you from the pages, accompanied by its characters, until it feels like you’re completely surrounded by the fairytale; a child tucked under the covers as another world replaces your own in the darkness before sleep, but beware of things that go bump in the night.

Overall, I was thoroughly enchanted by Juniper & Thorn, because it felt like the kind of timeless classic that gets at the core issues of being human in a way that seems fantastical, but upon introspection is all too real—aka, a good fairytale. I could also probably spend an additional thousand words describing the intricate layers of socio-economic and gender issues deftly stacked beneath the surface, but I’d rather you go read the book instead, because it’s a really good book. Go! Go read it! Just watch out for monsters.

Read if: You don’t mind looking into mirrors of truth; you understand that sometimes the world pushes children into ovens; slaying monsters is harder than loving them.