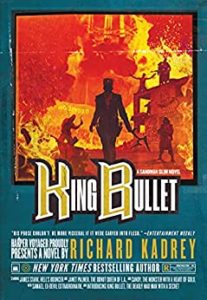 Greetings, readers, hopefully your summer is staying safe and sane, especially for those of you in Los Angeles. The reason I mention that specific city is because for this month’s review, we’re finishing off the Sandman Slim series in style with the glorious finale that is King Bullet, and the Los Angeles Richard Kadrey takes us to is one on the verge of erupting.

King Bullet takes place three months after the events of Ballistic Kiss, the previous Sandman Slim novel, and once again features James “Sandman Slim” Stark as the beaten up, broken down, world-weary occult noir protagonist who never met a problem he couldn’t violence his way out of. In King Bullet, Stark is desperately trying to make sense of a world gone insane—a deadly pandemic is choking out the life of the city (definitely inspired by Covid); his non-binary partner is having issues reconciling their life with his own; and an agent of pure mayhem leading a terrifying cult is trying to burn the entire place down in an orgy of destruction, eyes set squarely on Slim.

Luckily for Stark, he has plenty of old friends to count on (even if he doesn’t always trust himself enough to ask for their help), and each of the characters built up over the previous nine novels gets a chance to shine in this final entry (though for the dead ones it’s a bit more literal and fairly brief). The interpersonal relationships between all these obviously damaged people is, like the previous books, equal parts delightful and despairing to read, and everything is delivered in Kadrey’s terse yet evocative noir style.

As in the other Sandman Slim novels, one of the fun things about Kadrey’s writing is how the city of LA is just as much a character as Stark and his friends, with various local landmarks making their appearances throughout the story, as well as some homages to the city’s turbulent past. While real-life Los Angeles might not be quite as bleak as painted in King Bullet (we’re not ablaze yet as of this writing, but it’s still early in fire season), Kadrey does a bang-up job of weaving in some pressing current social issues, including the city’s homelessness problem, the relationship between its citizens and its police, and what happens when local municipal services all go to hell.

The other interesting thing I appreciated while reading the novel is how Kadrey doesn’t hold back from examining the mental toll Stark’s journey has taken on him. Sure, his body heals unnaturally quickly, but even the mind of a half-angel who came back from Hell can be a fragile thing, and Slim has seen more than his share of troubles. There’s also a remarkable amount of character growth in this last entry, with Stark making some choices—including his approach to the final set-piece showdown—with a maturity that feels hard-won and fairly earned. The denouement itself is suitably explosive, and felt like an appropriate way to finish off a series that has been about living with the consequences of making hard choices.

I do have to warn you as a reader, though—King Bullet is an absolutely deranged novel from start to finish (in a good way, I promise), and is probably the closest you’ll get to experiencing an acid trip while being completely sober. I actually did laugh out loud when Kadrey included a small bit about Stark enjoying the anime Dorohedoro, because of course Sandman Slim would resonate with that particular visual blend of “what the hell is even happening” and “now for some extreme ultra-violence.” It really felt like Kadrey decided to leave absolutely nothing off the table when it came to the conclusion of Stark’s story, and I, for one, am glad he decided to go for it, because it gives the book an almost manic intensity that makes it hard to stop turning the pages.

Overall, King Bullet is a satisfying conclusion to an epic noir saga, and is the perfect reading choice for both a day on the sand at Venice Beach, or an evening sipping bourbon amidst West Hollywood’s wild nightlife. While it’s always bittersweet to see a story come to an end, I’ll still keep an eye on the shadows, because someone like Sandman Slim doesn’t stay gone forever.

Read if: You like long fights against impossible odds; you know what it’s like to live on nothing but pizza; you’re wary of pigs.