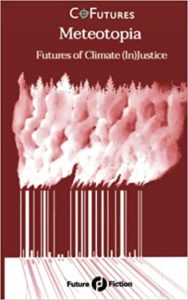 Climate fiction has become a catch phrase, and some see it as a genre unto itself, rather than as a subgenre of science fiction. The Encyclopedia of Science Fiction (bit.ly/3DXscOs) notes that Dan Bloom claims to have created the term “Cli-Fi” in 2007. Regardless, the term has become common enough that searches on bookstore sites turn up plenty of results by a variety of authors and editors, from the obscure to award-winning, such as N.K. Jemisin, Claire North, Jeff VanderMeer, Kim Stanley Robinson, and Jonathan Strahan. (In fact, see last issue for my review of Strahan’s Tomorrow’s Parties: Life in the Anthropocene; and I’d be remiss not to mention at least one of our own John Joseph Adams’ anthologies—for example, 2015’s Loosed Upon the World: The Saga Anthology of Climate Fiction.) There are even climate fiction contests, prizes, and awards, such as the Arizona State University Climate Fiction Contest and Omega Sci-Fi Awards’ New Suns Climate Fiction Award; plus magazines like Little Blue Marble whose focus is climate fiction. There are many more with overlapping or similar foci, and mainstream publications like The Atlantic (bit.ly/3FxvLf6) and The Guardian (bit.ly/3SQxVth) are giving chunks of magazine real estate to articles about climate fiction, covering books which we in genre would probably consider well within the boundaries of science fiction’s ever expansive (though perhaps permeable) borders.

Francesco Verso’s publishing house Future Fiction (co-founded with Francesco Mantovani) has teamed up with CoFUTURES, “an international research group working on contemporary Global Futurisms headquartered in Oslo, Norway,”—which is funded by the European Union’s Horizon 2020 research and innovation program—to publish a striking anthology called Meteotopia. Unlike many of the other recent climate fiction efforts you may have heard of, Meteotopia is deliberately international: each work is by an author with origins in a different country, such as Victor Fernando R. Ocampo tagged with “Philippines” and Soham Guha tagged with “India”; notably, there are no stories by authors tagged with “US” or “Canada” or any European country. In fact, the authors are meant to represent the Global South: “those populations that suffer the most from the consequences of climate change, even though they are not directly responsible for it: all the marginalized cultures, the future generations, the living animals and plants, all those left out of political discussions, G20 events, and financial speculations.”

Better yet: this book is free!

Chattopadhyay, Rüsche, and Verso have gathered an intriguing selection of original fiction. I’ll highlight a few as a sampler and leave the rest for discovery. It’s important to note that selections vary greatly in style, approach, and even focus. “Island of the Jaguars” by Toni Moraes, translated from Portuguese by G. Holleran, leans into exposition, and utilizes the kind of third person which was more popular in classic Anglophone SFF; stylistically, the combination isn’t for me. That said, there are a lot of cool, vivid ideas. It’s also about resisting different kinds of colonization, and cultural preservation in the face of encroaching forces that would both use you up and erase your existence. Lastly, it’s grounded in historic events which, in all likelihood, many Anglophone readers don’t know about. Detailed notes provided by the translator give even more context to the story, including some notes on translation choices, which I enjoyed seeing. I have no doubt that this narrative will engage many readers, that those aforementioned details will ignite imaginations, and that many will be engrossed by the struggles of Bartyra, Anahy, and the rest of the warriors.

“Bittersweet are the Waters” by Mame Bougouma Diene deals more directly than some with climate crisis. Set in a world where the oceans have dried up, it opens with a scene describing water consumption, wherein Miyongi trades one kind of water for another—using recycled water from feces to create a kind of private garden experiment, as well as to survive. The prose is pleasant and effective while more of a generally straightforward style, and the narrative itself fuses fable and the fantastic with climate futurism to fascinating effect. Similar to “Island of the Jaguars”, the narrative sometimes feels more focused on extrapolation of worldbuilding than story, but to my reading felt grounded in its characters. And again, those same details which I found distracting, many readers will find delightful—in fact, the story is packed with cool ideas. In time the plot coalesces, becoming a tale of revolution, with near-magical seeds as the best weapon against corporate greed. There’s a bit of meditation on human nature thrown in, as well as underlying commentary around class and poverty.

Let’s talk about Tlotlo Tsamaase’s “Eco-Humans”—okay, first of all, Tsamaase’s writing is beautiful. Turns of phrase, word order, choices of sounds, and more; there are so many wonderful choices that make the lines themselves a joy to read. In fact, many of the sentences and phrases read like poetry, carefully constructed in consideration of a variety of effects. Besides moments of gorgeous prose, the story itself is about poverty and survival. The protagonist is a future kind of person, something between android and human, and is caught in the cycles of generational poverty, which means limited opportunities. While it’s a far future tale, the narrative asks us to consider poverty now, and in particular the way those who are not poor participate in or benefit from systems of inequity—including generational wealth, or just being born with relative advantages. Our protagonist is in a struggle for love, even as she is on the verge of being unable to afford to live. It’s a nuanced and wonderfully imagined tale, with layers of meaning, which shines a light on power and class and what it means to live when you start off in a very different position than most of us reading this review.

One of my favorite stories in the book has to be “Letters to my mother” by Chinelo Onwualu. In a far future ecotopia (bit.ly/3zB8MvS), long after the climate wars, an individual finds a book from the distant past. While the “present” may be harmonious, the empathy of the protagonist means they more than just read the journal entries found within, they feel the pain of the conflicts of the past. The readings relay complex stories of a fraught relationship between a mother and her child. The protagonist has to navigate unfamiliar and building traumas of a relationship which ultimately ended in severe pain. On the one hand the story has an interesting vision of the future. At the same time, it’s a piercing narrative about pain and transformation. Both powerful and beautiful, combined with a writing and narrative style which is nothing less than elegant.

A second contender for favorite is “The Shadow of the Crystal” by Gabriela Damián Miravete. This story also uses the device of journal entries to create the sense of peering into the past, as well as newspaper clippings, emails, and the like; but these are more of a framing device than Onwualu’s story, where the events—and emotions—of the past have an immediate effect on the narrative of the “present”. Where Onwualu employs a very close first-person perspective throughout, Miravete begins with a close first person, which immediately orients the reader and infuses excitement and mood of character into the experience, then pulls back with other kinds of storytelling—a technique I found incredibly effective. Miravete also thrusts the reader into a different kind of setting from the other stories: we are led into a humid cave, whose environment is so hostile it can kill you in minutes; but it’s also an environment full of that sense of wonder many of us crave from our fiction, this time in the shape of massive crystal formations. As with Diene and Moraes, Miravete writes about revolution and resistance, but from the perspective of a scientist whose main goals are to discover and protect the strange crystals, which have grown (and possibly “live”) in an off-limits part of the cave system. The mood shifts from personal to scientific as the records undertake speculation around opal formations, and then political, with a report on the abuse of water rights by mining companies, contrasted by water scarcity among Mexican households. The narrative cleverly swings back to the personal, tying everything in with the central character’s journey, relationships, and life. Simultaneously the text undertakes conversations which look at environmentalism, science, and progress from different angles. Along the way, there’s fun science and science fiction, the kind where you feel like you are learning things, and which reads like something deeply researched and grounded in fascinating science and historic events. Oh, and just to take it to the next level? The text glitters with the occasional lovely turn of phrase. Running through it all is this engaging speculation around the cause of the strange, consciousness altering sounds that come from the crystals, as well as what might have made the unusual markings they bear. There’s an important conversation lining the narrative about the intertwined nature of corporate greed, scientific discovery, and the people who get caught in the consequences of both; plus underlying themes which speak on misogyny, international meddling, and more. I’d call my experience of this story bewonderment. Yes, I had to make up a word to describe it! This one is bound to please folks who like the personal journey, as well as folks who like more science in their science fiction. Seriously—this is what cool science fiction looks like, y’all.

Meteotopia includes fantastic illustrations, some in color and some black and white, which are credited to a number of artists. The copyright page has a note: “Special thanks go to Sandro Mattioli, professor at the International School of Comics in Rome, who collaborated with Future Fiction in the creation of the contest for the cover and internal illustrations that enrich this anthology.” And whoever wrote this note is correct: they really do enrich the anthology.

All told, this is an important addition to the wealth of climate fiction. I appreciate that it showcases perspectives that are still underrepresented in genre. Also, as I said at the top: it’s free! You can pick it up here: fiction.cofutures.org. I’ll also add that the Imagine 2200 climate fiction series1 from Grist Magazine is another great source of quality reads (bit.ly/3sJec4g).

1. See our reprint, “The Metamorphosis of Marie Martin” by Nadine Tomlinson from this year’s Imagine 2200. —ed.