Book Review: Monsters Born and Made, by Tanvi Berwah 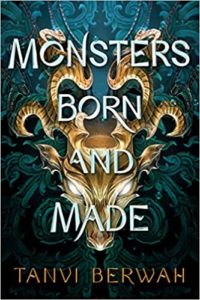 Greetings, readers, it’s time for another book review! This time we’ll be looking at the debut novel from Tanvi Berwah, a gripping tale of struggle and sacrifice in a scorched and hostile world, a story of Monsters Born and Made.

Monsters Born and Made follows the life of sixteen-year-old Koral, a Hunter of the ferocious sea-beast called a “maristag” (kind of like a kelpie—mythical half-horse half-fish—but with a much nastier disposition, poisonous blowdarts, and chompy fangs) that frequent the coastal waters around the island of Sollonia on which she and her family lives. Koral and her family’s livelihood depends on capturing and training maristags for the elite Landers class that runs the island, but as Hunters, they’re looked down upon by both Landers and lower-caste Renters alike; the Landers for not being one of them, and the Renters for daring to work with their oppressors. When Koral and her brother Emrik fail to catch a maristag needed to secure the family’s future, Koral finds herself forced into increasingly dangerous choices to try and keep those she loves alive.

One of the first things I noticed about Monsters Born and Made was the complexity that Berwah infuses her characters with right from the start. Koral’s relationship with her family is deeply complicated, but sadly familiar in its combination of love and trauma that all too frequently affects those pushed to the margins of society. It’s an ambitious undertaking for a debut novel, but one that works throughout the course of the book, mainly because Berwah isn’t afraid to delve into the highs and lows of Koral’s family dynamics. Koral and her family are a jagged, broken thing, but despite all the pain there’s still an undercurrent of hope that they can find a way to patch the pieces back together into something that’s a little better than it was before.

Another thing I liked about Monsters Born and Made is that it’s suffused with a very strong sub-theme of class/economic disparity, but it conveys its message without seeming forced or condescending. The antagonists (of all sides) are motivated by believable desires, and Koral’s attempt to navigate competing spheres of power while looking out for her loved ones leads to natural conflict between factions that all want a piece of Koral and what they think she can represent for them. Nor is Koral a perfect navigator of these treacherous tides—she makes plenty of mistakes on both the micro and macro level, but keeps fighting forward with an indomitable will.

One way Berwah really helps sell the conflicts in Monsters Born and Made is the environmental stresses of the world Koral lives in. While it’s similar to Earth (in that there’s oxygen and water), Koral’s planet has a hotter, harsher sun, is covered almost entirely in oceans, and is filled with aquatic life that’s relentlessly hostile towards humanity and each other. For all the fighting between the various human factions, there’s an underlying current of understanding that surviving on the planet comes first, but it’s a delicate balance that’s reaching its breaking point. In many ways, it feels similar to climate-dystopia books like Paolo Bacigalupi’s The Windup Girl, or Blackfish City by Sam Miller, but Berwah definitely puts her own twist on how an inimical world both contributes to social stratification as well as ultimately forcing it to crack.

The only fault I had with Monsters Born and Made is that some of the action scenes are a little loose, in that it was hard for me to picture exactly what was going on, in contrast to the gritty realness of the city in which Koral lives, and the evocatively harsh feel of the island and its environs. It wasn’t enough to take me out of the story, but it was slightly jarring compared to the level of inspired descriptiveness that permeates so much else of the book. Overall, though, it’s a minor complaint, and only stands out compared to the wonderful writing in all the other facets of the story.

Ultimately, I was very impressed with Monsters Born and Made, both with the boldness of the personal dynamics between all the characters as well as the evocative style of Berwah’s writing. If you’re looking for a book that has something to say and isn’t afraid to say it to your face, you should definitely check out Monsters Born and Made.

Read if: you’ve ever wanted to ride a seamurderhorse; you dream of seeing what’s over the horizon; you know what it’s like when family is complicated.