Book Review: Never Have I Ever by Isabel Yap 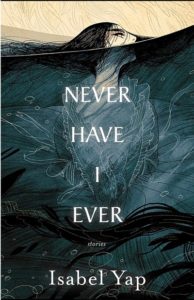 When Isabel Yap isn’t at work in the tech industry, she is writing the kind of fiction that soaks up your awareness, that immerses you in moods and moments and leaves you stunned. Her earliest publications appear in places such as Philippine Speculative Fiction Volume V, Diaspora Ad Astra: Science Fiction from the Philippines, and Horror: Filipino Fiction for Young Adults. The effect of reading a few of her stories is a gentle hunger, a slowly building desire to seek out more of her work and savor it. The fact that her first stories appeared outside the usual US short fiction markets is a strong argument for the need of genre readers and reviewers to seek work from beyond our borders, as well as to acknowledge the taste of editors outside the usual batch of regulars appearing on our major awards circuits, editors who recognized a skilled storyteller.

The good news: Collections such as this one are like ordering the tasting menu at a fine restaurant. After you finish that first story, you will sit in silence, letting it sink in, completely taken by the lingering effects. And when that hunger to read more tugs at you: Thankfully, there’s more on offer, carefully curated via the exacting standards of Gavin Grant and Kelly Link of Small Beer Press.

Opening story “Good Girls” is an absolute win. Originally published in Shimmer, it’s the kind of piece which makes you want to throw money at a magazine; to subscribe and read everything. The prose pulls you in, the moment immediate, the scene intimate, grotesque, and beautiful at once. The narrator is a monster who flies through the night and feasts on the vulnerable and unsuspecting. But the narrative renders the monster as human-ish and strange in the best of ways, as she navigates fragile relationships, as well as her own desires and limitations. Set largely at the Bakersfield Good Girl Reformation Retreat, a camp meant to correct behavior, this story goes further by exploring depression, gender oppression, friendship, and more, every line and thought nuanced, every theme smoothly delivered. But what really delights me is the surprise; and for this reason, this piece is a wonderful starter. Mastery is on display here: decisions that take the tale to the unexpected; reveals and tilts of plot that make sense, that never feel gratuitous, and yet, altogether, create an utterly unique journey. Dreamlike, layered, rich. An absolute win.

Mastery of story and surprise continues through many of the pieces in this book. “A Cup of Salt Tears” is a fantastic tale, originally published at Tor.com. It’s nearly as delightfully unsettling and strange as “Good Girls,” and combined, these two—let alone the rest of the collection—should be enough to place Yap among the best writers of weird, dark fantasy, and horror. Makino is slowly drowning in her grief as her husband is dying in the hospital. A kappa intrudes upon her grief, a demon known to haunt waters; this one claiming to have saved her when she was young. What follows is a mesmerizing exploration of a strange and solemn love.

“Have You Heard the One About Anamaria Marquez?” plays on the notion of schoolyard myths: stories kids tell to each other, each one more fantastical than the last, often horrific and, if we pay attention, telling of the fears inhabiting the lives of kids. Set in a private school, the through line is about a shifting friendship between Mica and her friend Hazel. After hearing a story about opening the third eye, Hazel declares that she’s done it; Mica doesn’t believe her, and their friendship is strained. The through line is broken into segments by short bits about Anamaria Marquez and the various ways that she died—each one leaving her as a dangerous ghost. As a whole, this story is startling, clever, bold, and very entertaining.

“Milagroso” is set in a near future where people eat synthetically produced foods and natural foods are not only considered rare, but potentially dangerous, at least by some. Others consider natural foods a blessing, a miracle. Marty brings his new family to visit his childhood home, and takes part in a festival which celebrates natural foods, among people who have become slightly strange to him, people who tell him a true miracle is about to happen. This is a beautiful story about family and cultural connections, seasoned with a touch of irony.

“Syringe” is one of three previously unpublished pieces, a very short tale of an ailing woman in a hospital surrounded by humanlike robot nurses and doctors. Even within the span of a few pages, Yap develops moments of devastating sweetness, layered with melancholy, framed by a science fictional notion, and steeped in the complexities of grief.

There are more wonderful stories to be sampled in this collection, thirteen in all. These are a few which are on my mind, which call me back to Yap’s work. I urge you to dig in, to experience the dark wonder of a seriously underrated writer, and to take your time savoring these stories. Yap will surprise you, she will startle you, and she will impress you.